Homeowners’ association stresses it is a small portion of the neighborhood affected. 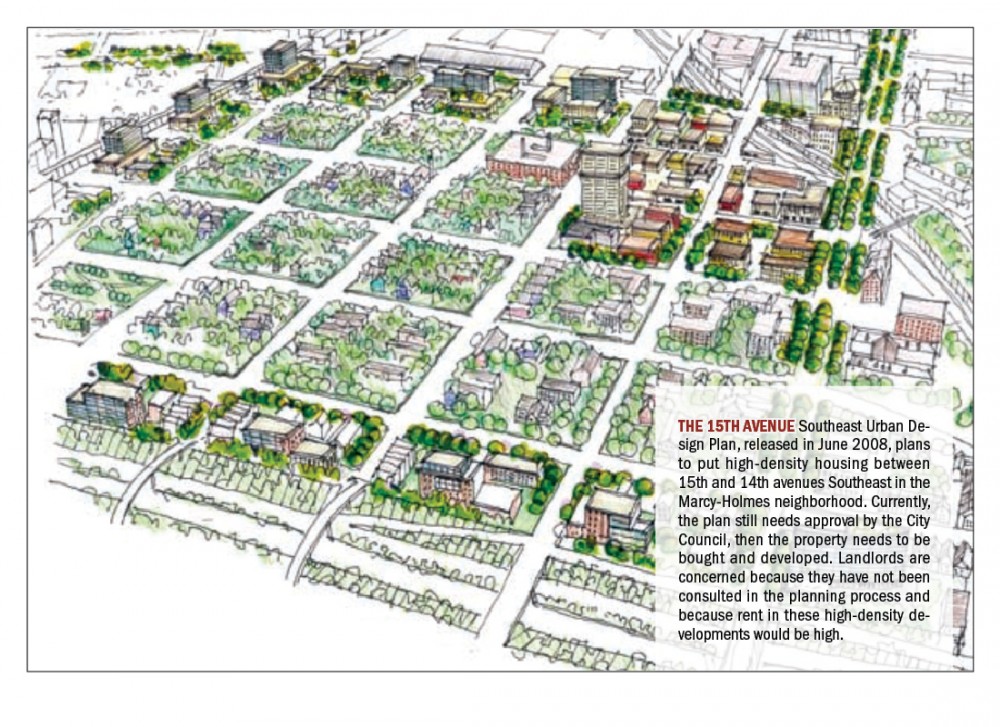 Jason Klohs, a Minneapolis landlord, is concerned that it might be much harder to find a rental home in Dinkytown in the near future. Last year, the Marcy-Holmes Neighborhood Association introduced the 15th Avenue SE Urban Design Plan in an effort to plan for projected future growth in the neighborhood. The plan proposes adding high-density housing between 15th and 14th avenues southeast in the Marcy-Holmes Neighborhood. Melissa Bean, Marcy-Holmes Neighborhood Association director, said the three-and-a-half block area was picked because, when the 2003 Master Plan was adopted, it was chosen by the University District Partnership Alliance as an area that could be developed to balance housing types in the area. Klohs does not see it that way, though. He said the plan is part of an agenda by homeowners in the neighborhood to push landlords out of the core of the neighborhood and to the outskirts of the area. âÄúThey can just start changing the use of [properties] so that it makes it harder and harder for landlords to operate,âÄù Klohs said. âÄúDoes this plan alone change it? No, but itâÄôs the old âÄògive them an inch and theyâÄôll take a foot theory.âÄôâÄù Among the Marcy-Holmes Neighborhood AssociationâÄôs goals outlined in the plan is to increase parking in Dinkytown and eliminate âÄúblighted and poorly-maintained properties.âÄù Klohs said these are among the biggest complaints he hears about Dinkytown renters. He does not, however, believe that these are solely the landlordsâÄô problem. He said the University needs to provide more parking for students commuting and living in the dorms. Klohs said there should be more than enough room for tenants and homeowners to park on public streets, but overflow from students not wanting to pay for parking is the real problem. He said the University needs to build more parking for commuters and students living in residence halls. The 15th Avenue plan does include underground parking for the proposed high-density housing. Surface parking is also addressed; the plan states that surface lots should be at the center of the block. Regarding âÄúunsightly properties,âÄù Klohs said there are codes in place to force landlords to maintain property. Bean is in agreement with one sentiment expressed by attorney William Wells, who represents 26 landlords in the area âÄî several properties along 15th Avenue are blighted and need upkeep. âÄúThey are leaning, they havenâÄôt been invested in to the point they should be,âÄù said Wells. âÄúThere is a massive disinvestment. We are all trying to talk about how to reinvest in the neighborhood.âÄù Bean said many projects are currently on hold because of the poor economy. If more homes in the area were to be re-zoned into single family homes, and the proposed high-density housing built, it would be costly. In a document obtained by the Daily, Jonathan Dolphin, chief lending officer for 21st Century Bank in Minneapolis, wrote to the Minneapolis Department of Community Planning and Economic Development stating that rent in the high-density living areas could be as high as $900 per month. âÄúThe reality is that the market wonâÄôt hold it,âÄù Klohs said. âÄúThe cost of that land priced per square foot of that land is too expensive for a family to own.âÄù Beyond the finances, concerns about demand have also been expressed. âÄúA lot of students donâÄôt like that lifestyle,âÄù said Wells. Bean said this lifestyle accommodates growth without necessarily changing the demographic. She said it could be a mix of current Marcy-Holmes renters and new renters that move into the proposed development. âÄúThis is about three-and-a-half blocks,âÄù Bean said. âÄúItâÄôs not the whole neighborhood. There are not a lot of homes that students are living in there now. There will still be plenty of housing options in the neighborhood.âÄù