The Gophers will face Ohio State and Penn State over the weekend. 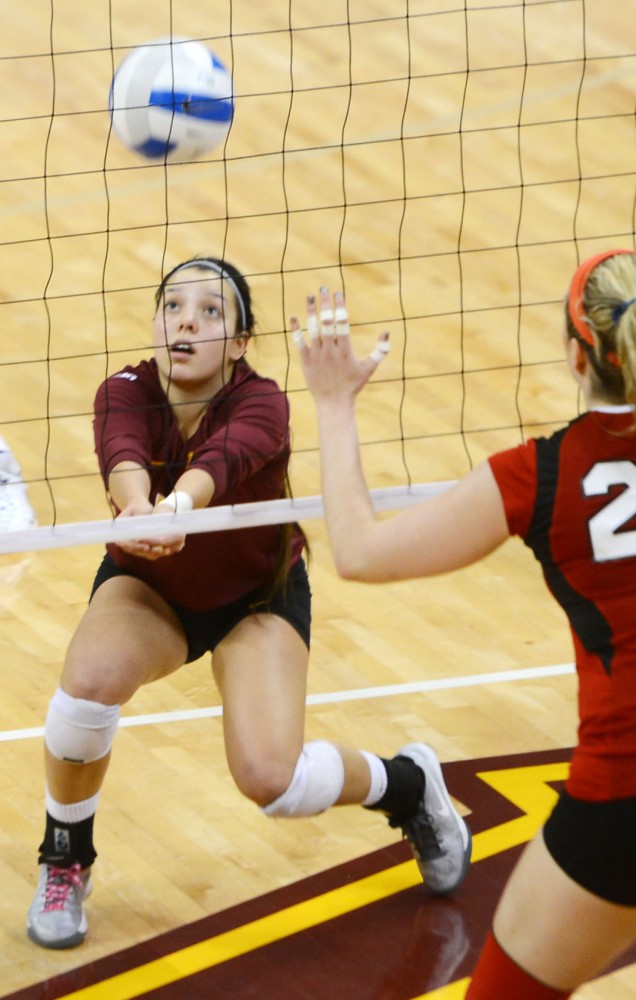 Minnesota defense specialist Lindsey Lawmaster sets the ball against Nebraska at the Sports Pavilion on Sunday.

Whatever the position and whoever the player, the Gophers have stepped up on defense over the past couple of weeks.

With two talented hitting teams coming to the Sports Pavilion on Friday and Saturday, the Gophers want to make sure their defense stays stout.

“[Ohio State] plays with a lot of different offensive schemes. So as a blocking and defensive team, we have to be very aware of what’s going on,” head coach Hugh McCutcheon said. “We’ve got to be able to manage the different schemes they’re going to throw at us.”

Minnesota has shown its solid defense. Minnesota has out-blocked opponents in four of its last five matches, holding them to an average .193 hitting percentage.

Sophomore outside hitter Daly Santana stepped up in the five-set loss to Nebraska, leading the team with 14 digs to go along with her 15 kills.

In four of the last five matches, a position other than the libero has led the team in digs — a trend for the Gophers the entire season.

“As a program, we’re trying to develop generalized specialists — people who are good at everything, not just one or two things,” McCutcheon said. “I think a lot of the underclassmen are grasping the concepts and applying [them].”

Recently, McCutcheon played junior Morgan Bohl and sophomore Lindsey Lawmaster together as defensive specialist and libero, respectively, instead of having them compete for the libero position.

“Both of those athletes have earned the right to be out there,” McCutcheon said. “This allows us to play to their strengths.”

Their strength is in defense, something the Gophers will need this weekend. Penn State is the No. 1 team in the Big Ten for hitting percentage, and Ohio State senior outside hitter Kaitlyn Leary leads the conference in kills per set.

“I think we bring the best out of each other,” Bohl said. “We’ve always been in the position of having to compete for one spot, but now since we’re both on the court, we’re both able to help each other out while still competing.”

Bohl and Lawmaster averaged a combined 16.5 digs per match this past weekend, something they said they hope to continue into this weekend’s contests.

“Molly is a wonderful addition to our program,” McCutcheon said in a release. “She is a talented and driven volleyball athlete, and we look forward to working with her in 2014 and beyond.”

Lohman, an all-state selection, finished her high school career with 853 kills, 51 assists, 94 aces, 250 blocks and 307 digs. She was an AAU All-American with the Northern Lights club team. Lohman ranked No. 38 on Prep Volleyball’s Top 100.

Lohman’s 115 blocks this year ranked second in Minnesota while her 365 kills ranked ninth.