The Gophers will try to snap a two-game losing streak Saturday. 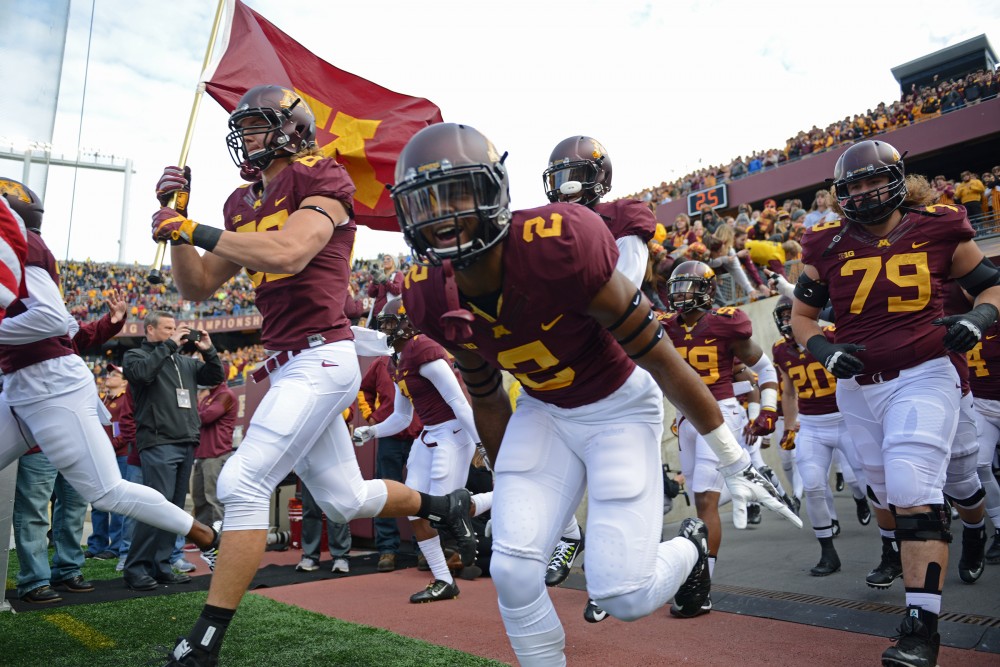 The Gophers (3-2, 0-2 Big Ten) travel to Maryland (4-1, 1-1) for one of their hardest matchups in their young season. A breakdown, prediction and notes can be found below:

Minnesota’s running game took a step back last week against Iowa, as the team only rushed for 102 yards — its lowest of the season. This was surprising as Iowa’s rushing defense is mediocre.

The Gophers should bounce back on the ground against Maryland, even with their dual-threat quarterback Mitch Leidner out for the game. Running backs Shannon Brooks and Rodney Smith only had 21 combined carries and probably would’ve seen more success if they got the ball more. Minnesota’s offensive line was a mess that game, but 21 attempts felt like a low amount for the Gophers strong ground game. The group is still averaging over 200 yards a game.

On paper, Maryland’s rushing defense is almost identical to Iowa’s. The Hawkeyes are 72nd in the FBS while Maryland is 73rd. The Terrapins have had an easier schedule than the Hawkeyes, and Minnesota’s rushing offense has been too good this season to not take advantage of the Terrapin’s average rushing defense. Look for Minnesota to run it a lot with Leidner being injured.

When Maryland runs the ball:

Among the seven different players, running back Lorenzo Harrison has stood out. He’s averaging 8.2 yards a carry on 44 attempts and has four touchdowns. Running back Ty Johnson has also done well, with an average of 10.4 yards a carry on 33 attempts. Finally, quarterback Perry Hills is very mobile and has 120 yards and two touchdowns on the ground this year. The Terrapins are 9th in the FBS in rushing yards a game; this could be the Gophers hardest game yet and possibly all season.

Minnesota’s rushing defense is 36th in the FBS, allowing only five touchdowns. Still, Maryland’s rushing offense is very good and the Gophers could have a hard time containing it.

The main thing to know here is that Leidner is out for the game with a concussion. He had an abysmal game against Iowa but still remains as the Gophers’ best option at quarterback. The inexperienced Conor Rhoda will be taking his spot for the game. The redshirt junior only has two career pass attempts and this will be his first career start.

Leidner is the main part of the Gophers’ passing offense, so however the team has been through the air this season, it doesn’t really matter for this game.

It should not be forgotten that the Terrapins’ passing defense is good, coming in at 32nd in the FBS. Cornerback William Likely is an elite player who could cause serious problems for Minnesota’s passing offense. Even though Maryland hasn’t faced great quarterbacks yet, Minnesota will continue that streak. This won’t be an easy first start for Rhoda and the Gophers will probably run it a lot more than they did against Iowa.

When Maryland passes the ball:

Maryland’s passing offense is 118th in the FBS this year with only 153 yards a game, but a lot of that is because the Terrapins run the ball a lot more than they throw it. Maryland averages 21.2 attempts a game through the air but they average 44.6 attempts a game on the ground.

Hills is not a strong quarterback and one of the easier ones the Gophers will face all year. However, he doesn’t throw the ball that much so it will be hard for Minnesota to take advantage of it.

When he does throw the ball, Minnesota will have to try to create turnovers to give its offense more opportunities to score. After a slow start to the season, Minnesota’s passing defense is now mostly healthy and had a good game against Iowa. Still, the Gophers’ passing defense is 73rd in the FBS and their inconsistent play could stop them from making a difference in this game.

The Terrapins have been a surprise this season and appear to be a better team than Minnesota. The Gophers losing streak will extend to three games and they will remain winless in the Big Ten as their season goes from bad to worse.

Around the web on the Gophers and the Terrapins:

1. Maryland star Will Likely goes back to his fertile football grounds

-Will Likely is one of the best defensive backs in the Big Ten. Don Markus of the Baltimore Sun looks into Likely’s football roots in this feature on the star player. It’s a good read on a player who looks like he’ll be in the NFL one day.

2. Scoggins: Did Leidner hit rock bottom in loss to Hawkeyes?

-This is a column by the Star Tribune’s Chip Scoggins on Leidner from after the Iowa game. A good game from Leidner could’ve reshaped the narrative of his career, Scoggins writes, but instead it reinforced every negative perception about him.

-Minnesota will have a new quarterback on Saturday and the Diamondback’s Callie Caplan writes about how Maryland is preparing for it. Head coach DJ Durkin said he thinks Minnesota will stay within their same offensive scheme.

4. What happened to that Gophers QB who transferred?

-This is a fun look back at the multiple quarterbacks that have transferred from Minnesota over the years by the Pioneer Press’ Andy Greder, who provides an update on five quarterbacks who left the Minnesota football team.

5. Maryland football is once again relevant in October. Don’t expect it every year.

-The Washington Post’s John Feinstein pens a column about how while Maryland is off to a nice start, this may not be the case in future years. The Big Ten East has been easier than expected and Maryland is still a basketball-first program, Feinstein writes. This column was posted before the Mayland-Penn State game but a lot of it still applies to the current state of the team.

-The chances of Minnesota winning the Big Ten West were low entering the season, but now are practically non-existent. It’s still statistically possible, but that would involve some big losses by Nebraska and Wisconsin. Minnesota’s realistic goal right now should be to finish fourth in the Big Ten West, ahead of Northwestern and Purdue — but still behind Iowa, Wisconsin and Nebraska.

2. Anything above 6-6 on the season would be a major victory

-This is a schedule where the Gophers should’ve been able to go 8-4 or 7-5, but the two most recent losses makes that tough, given that their end-of-year schedule is difficult. They have three games after Maryland that looks like easy wins, but then face Nebraska and Wisconsin on the road, plus a hard home matchup against Northwestern. If the Gophers end the year 6-6 or above, that would be pretty good for them, but right now .500 is looking like the realistic mark. Their wins will likely come against Rutgers, Purdue and Illinois.

3. Passing defense looks back on track

-The passing defense was a nightmare in the beginning of the season, but the game against Iowa was encouraging for the group. Cornerbacks KiAnte Hardin and Ray Buford have returned from suspensions and the group is mostly healthy for the first time this year. This isn’t the same elite-passing defense from last year, but it’s still an above average secondary.

-Conor Rhoda will start over Mitch Leidner on Saturday. A story on how Rhoda got here and what his teammates and coaches have said about him.

-Cornerback KiAnte Hardin returned from his suspension against Iowa and had an interception. An article on what that means for the passing defense as a whole.

3. Questions from the Other Side: Maryland football columnist Kyle Stackpole

-For this week’s Questions from the Other Side, the Minnesota Daily interviewed Kyle Stackpole, sports editor of Maryland’s student newspaper, The Diamondback.

4. Minnesota to adjust without Leidner

-An update from Tuesday on Leidner missing the game against Maryland.

-Sidebar from Saturday about Minnesota’s running game disappearing against Iowa.

-Game recap from the Iowa-Minnesota game.