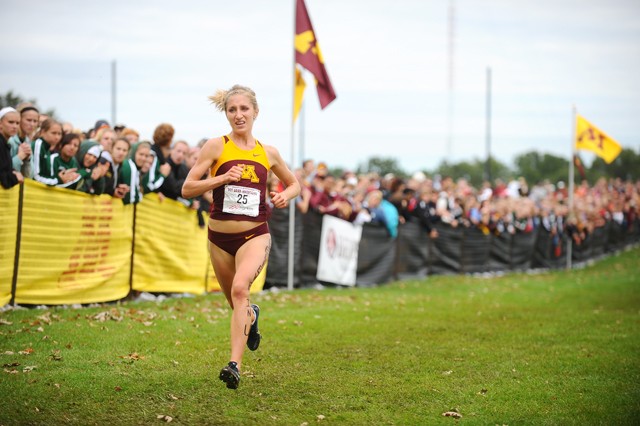 The womenâÄôs cross country team has set its top-12, fully one month into the season and with just two weeks before the Pre-NCAA meet.

The nine runners who competed at last weekendâÄôs South Dakota State meet will all be in the top-12, as well as Steph Price, who missed the meet to attend her sisterâÄôs wedding. The final two spots will go to senior captain Kelly Wilson and Cassy Opitz, head coach Gary Wilson said.

The reason for the differing philosophies is a numbers game.

The WomenâÄôs roster is more than twice the size of the menâÄôs, 51 members to 21.

ThatâÄôs also the reason why the menâÄôs team has had fewer meets this season. The womenâÄôs team has run in five meets to ensure every member can compete, while the men have ran just three and traveled only once.

The menâÄôs team is in a different position because a race weekend would utilize a much larger percentage of the teamâÄôs roster. Plasencia said the team isnâÄôt at the point in the season where they need to be competing every other weekend.

The final number that factors into the respective roster and schedule decisions is the distance.

For the NCAA menâÄôs championships, they bump the distance up to 10-K while the women remain at 6-K

With the increase in distance, the menâÄôs primary focus early in the season is to train to run more mileage as the season wears on, Plasencia said.