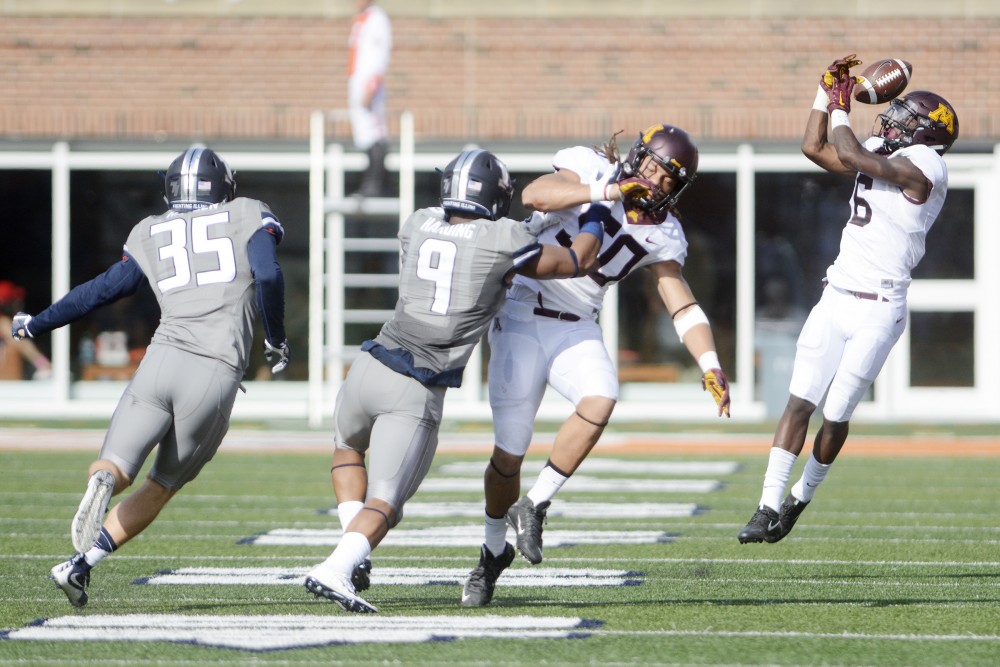 The first thing Gophers linebacker Jonathan Celestin said he did when he got back home from Minnesota’s game at Illinois was watch more football.

Celestin watched the game between No. 9 Nebraska and No. 8 Wisconsin Saturday night, and saw two of Minnesota’s future opponents this season battle it out in a game that had big implications for the Big Ten West.

He said he found himself rooting for Wisconsin, as a Badgers’ win would give Minnesota a higher chance of competing for the division.

“It’s not what I [wanted] to do, but I know we needed [Wisconsin] to get a win to help out in the Big Ten West and make everything be in our position,” Celestin said.

Quarterback Mitch Leidner also watched the Nebraska-Wisconsin game, but said he wasn’t rooting for any team in particular and doesn’t pay too much attention to the standings.

He said head coach Tracy Claeys addressed the team about the game on Sunday.

“[Claeys] had just mentioned Wisconsin beat Nebraska, how it puts us closer, and how people are starting to count us back in this thing,” Leidner said. “We’re right where there we want to be going into November and that’s what we really wanted as a team.”

The Gophers’ chances to win the Big Ten West looked slim in the middle of October.

Minnesota fell to 0-2 in the Big Ten after back-to-back losses against Penn State and Iowa.

But the Gophers won their next three and put themselves back into the conversation for the Big Ten West. The team now sits in second place, tied with four other teams and one game behind Nebraska.

“There are a lot of teams that play in November and games don’t mean anything,” Claeys said. “It’s nice to be in this position and now hopefully we’ve got to do things well enough to take advantage of it.”

The Boilermakers — Minnesota’s next opponent — only has one Big Ten win this season.

But after that is when the schedule gets tough for Minnesota.

The Gophers will play Nebraska and Wisconsin in two of their final three games. In between those two matchups is Northwestern, a team that is also tied for second in the Big Ten West.

“Something we’ve really tried to distribute throughout the rest of the team is one game at a time, really one play at a time, just kind of live in the moment, rather than getting caught up in the results,” Leidner said.

Even though the Gophers are only one game back of first in the Big Ten, the schedule will make things hard.

“We know where we’re at, that we’ve got to win out in order to have a chance to play in the Big Ten championship game, but that’s kind of in the back of our minds,” said linebacker Nick Rallis. “We set that goal at the beginning of the season.”

-Minnesota and Mississippi State have agreed to play two games, one in Minnesota in 2026, and one in Mississippi in 2027. It will be the first-ever matchup between the two teams.

-Wide receiver Brian Smith has been dismissed from the team for a violation of team rules, Claeys said Tuesday. Smith was the team’s second-leading receiver and had one touchdown.