The men’s team dominated the St. John’s Fall Finale, with a clean sweep. 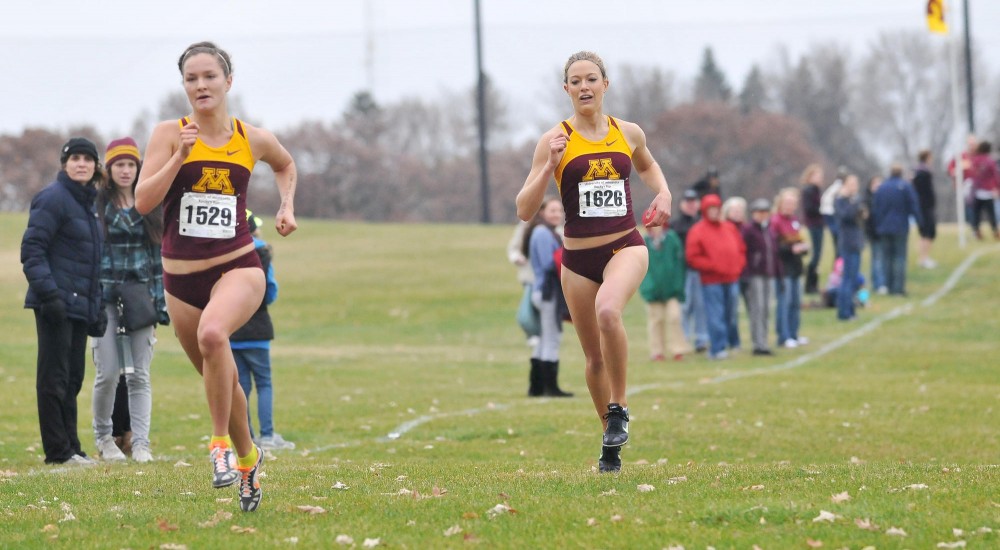 Rachel Drake and Missa Varpness approach the finish line at the annual Rocky's Run Sunday in Falcon Heights. Over 200 people participated in the 6 kilometer run to benefit the Rocky Racette charity.

COLLEGEVILLE, Minn. âÄî The bottom half of the Gophers menâÄôs cross country team closed its season Friday with a perfect sweep of the St. JohnâÄôs Fall Finale.

All 13 Gophers runners finished in order atop the race.

Freshman Adam Zutz won the race unattached after pacing the field for the majority of the 8-kilometer race. Another unattached freshman, Matt Jergenson, came in second.

Assistant coach Chris Rombough, who traveled with the team to the St. Cloud-area meet, said their development has exceeded the teamâÄôs expectations.

The team thought at the beginning of the year that Zutz might crack the scoring roster, but Jergenson has come from a small high school program in Caledonia and
impressed.

While the two freshmen showed signs of encouragement for next year, several other runners had disappointing races.

âÄúWe were hoping for better performances from some of the other guys. Sometimes I feel like a low-key meet is a little detrimental,âÄù Rombough said.

Paul Hilsen was the first official scorer to cross the finish line, but was outpaced by the freshman. Hilsen ran in the Big Ten Championships on Oct. 30 and Rombough said he may have still been tired from that meet.

Several runners from the scoring team drove up to cheer on the non-scorers.

The Gophers womenâÄôs cross country team hosted RockyâÄôs Run on Sunday in its final home meet of the season.

No team score was kept, but the meet served as a way for runners to gauge their growth from the beginning of the season to now.

âÄúThis is probably the most difficult meet the kids run all year because youâÄôre kind of at the end , and itâÄôs a tough situation,âÄù head coach Gary Wilson said. âÄúI think the kids fought well today.âÄù

Rachel Drake was able to pass Missa Varpness at the finish line and was the GophersâÄô first team finisher Sunday.

Drake finished with a time of 22 minutes, 25 seconds, and Varpness finished just one second behind her.

The top runners who will run at the NCAA Midwest Regional Championships did not compete in RockyâÄôs Run.

âÄúFor our group thatâÄôs not moving on to the regional meet and national meet, itâÄôs just a great way to wrap up the season,âÄù assistant coach Sarah Hesser said.

More than 200 runners participated in the RockyâÄôs Run, which helps raise money for the Rocky Racette Foundation.

She was a former All-American for the Gophers and holds the school record for the 10-kilometer race.

âÄúShe had a big impact on people and itâÄôs nice to have this established in her name,âÄù Wilson said.