No. 2 Gophers travel to North Dakota to face rival Sioux

Minnesota holds a two point lead over North Dakota in the WCHA. 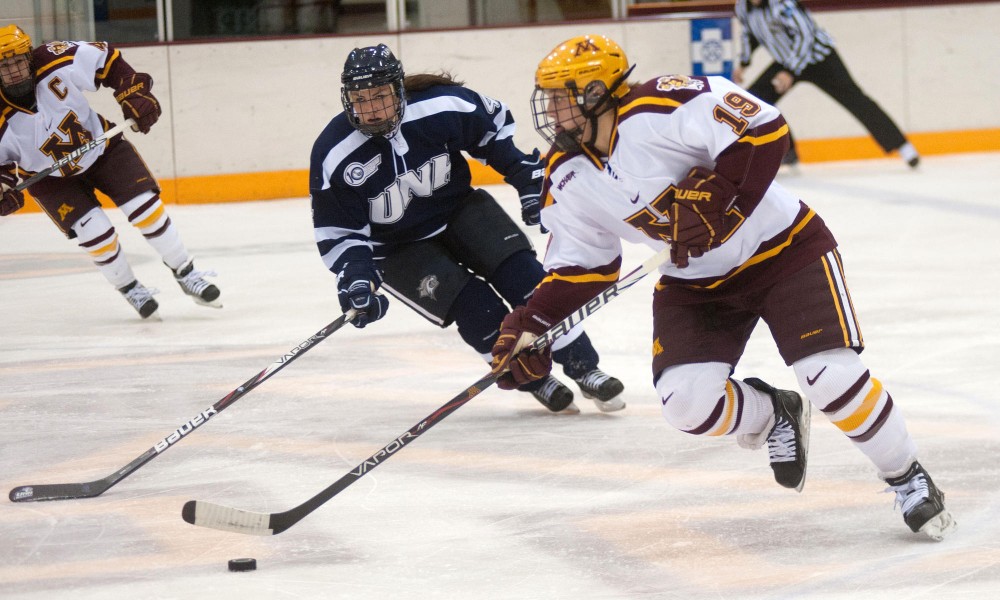 ThereâÄôs a bit of a logjam atop the WCHA standings, and No. 2 Minnesota and No. 5 North Dakota are right in the middle of it.

Oh, and theyâÄôll be meeting this weekend, too.

The Gophers, who trail only Wisconsin in the WCHA, will have a chance to extend their two-point lead over the third-place Sioux in North Dakota this weekend.

âÄúThe conference is so tight, especially where weâÄôre at according to North Dakota. ItâÄôs going to be a huge last couple weekends of play,âÄù Minnesota assistant coach Joel Johnson said. âÄúTwo real good teams are facing off this weekend.âÄù

However, all three losses came last season, as UND beat Minnesota in three of the teamsâÄô four meetings.

Senior captain Sarah Erickson said that âÄúitâÄôs more of a rivalry now than it ever has been.âÄù

âÄúWe kind of beat ourselves last year,âÄù Erickson said. âÄúWe kind of dug ourselves a hole right away and we werenâÄôt able to get out of it. [The losses] give us a lot of incentive this year. I think we can calm down and just play some hockey.âÄù

The Sioux are led by twins Jocelyne Lamoureux and Monique Lamoureux-Kolls. The sisters starred for Minnesota in 2008-09, but transferred to UND after the season in part to be closer to their native Grand Forks, N.D.

âÄúTheyâÄôre very good hockey players. The fact that they played here and left only intensifies the rivalry,âÄù Johnson said.

They played for the United States in the 2010 Winter Olympic Games. They combined for 111 points in 2010-11, their first year with the Sioux.

This season, Jocelyne Lamoureux leads the conference in scoring with 41 points (15 goals, 26 assists), and Monique Lamoureux-Kolls is fifth with 32 (12 goals, 20 assists).

âÄúLast year, I think we focused a little too much on their two best forwards,âÄù she said. âÄúWe need to protect their whole team.

âÄúIf we focus on two players, they have three other lines that can capitalize.âÄù

Bozek said the games will be physical, and she expects the referees will be prepared for physical play.

The SiouxâÄôs home, Ralph Engelstad Arena, is widely regarded as one of the nicest venues in the nation, and Erickson said itâÄôs a fun place to play.

âÄúItâÄôs an amazing arena to play in,âÄù she said, âÄúand they get more fans every year because theyâÄôre getting better and better every year, which is nice.âÄù

UND is averaging 2,277 fans per contest, the most fans in the nation.