After serving to decoys posing as minors, the bar may have to adhere to a set of recommendations from the city. 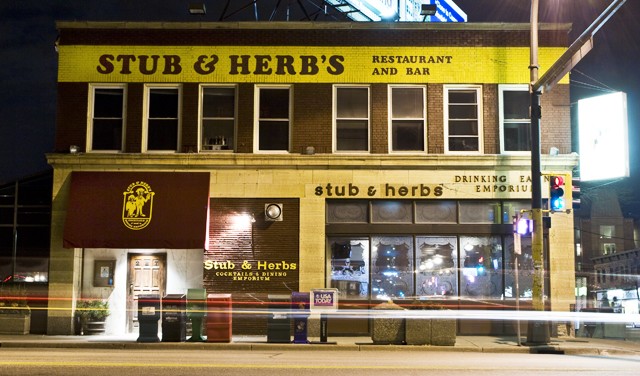 Having served four underage decoys within a five-month period, Stub & Herbs must adhere to a list of conditions âÄî including fines, policy changes and a brief suspension âÄî if theyâÄôre approved by the city council on Friday. In the 11 months Sgt. Rolf Markstrom has led the Minneapolis Police Department Licensing Division âÄòs alcohol compliance checks, Stub & Herbs is one of only three businesses that have failed the checks on three separate occasions, he said. âÄúWe want them to understand that weâÄôre not trying to sneak one in or pull one over, that you always have to be vigilant about how you manage your alcohol sales and service,âÄù Ricardo Cervantes, deputy director of licenses and consumer services, said. The bar received a $500 citation in April when an employee served one of two decoys sent by the city. The same happened the following month, resulting in a $1,000 fine. In July, a Stub & HerbsâÄô employee refused to serve two underage decoys. During the third University of Minnesota football game, the city sent decoys to five businesses with expanded outdoor patios. The Stub & Herbs security guard admitted two underage decoys into the outdoor area, both of whom were served alcohol, resulting in a $2,000 citation and a meeting with city officials. On the same game day, Campus Pizza was also cited for serving a decoy. SallyâÄôs Saloon & Eatery, The Library Bar and Grill and the McNamara Alumni Center each passed tests. Each time a business serves alcohol to a decoy, theyâÄôre re-checked within 30 to 60 days until they pass two times in a row, Markstrom said. âÄúIt was carried out in a fair way,âÄù Josh Zavadjil, owner of Stub & Herbs, said. Management was notified after each alcohol compliance failure, pass and of the fact that more decoys would follow the failures, Zavadjil said. The recommendations include a $5,000 fine in addition to the existing citations, $2,000 of which they would not need to pay if no further violations occur. Stub & Herbs would also need to abide by a 30-day suspension, but 27 days would be exempted if no more violations occur over the next two years. Stub and HerbâÄôs would also need to provide the licensing department with an outline of its alcohol policy, get an electronic card reader, discuss alcohol policies at each staff meeting, provide employees âÄúrefresherâÄù alcohol service training, post signs to identify customers of the barâÄôs alcohol policy and have a representative attend scheduled Liquor in the City meetings for the next two years. The bar has already had two electronic card readers as well as signs notifying customers of the alcohol policy âÄî one at each entry and two at the bar, Zavadjil said. If the recommendations pass, Stub and Herbs will need to institute a youth alcohol âÄúself-checkâÄù program, in which management would need to hire four decoys a year for the next two years and make the results available to city officials. Each of the underage decoys used their actual driverâÄôs license to purchase the alcohol, Markstrom said. Most of the decoys have Minnesota licenses, he said. âÄúTheyâÄôre not fake; they donâÄôt try to tell the employees they donâÄôt have IDs,âÄù he said. âÄúWhen asked, they present their true ID.âÄù The city has been more aggressive with its compliance checks in the past four years, Cervantes said. Typically, businesses improve their practices once theyâÄôve met with city officials. âÄúWe really arenâÄôt looking at putting these businesses out of business,âÄù he said, âÄúbut they do have to adhere to the law, so we want to make sure that this is an important thing.âÄù