Senior Nate Mason had 33 points in his final game at Williams Arena. 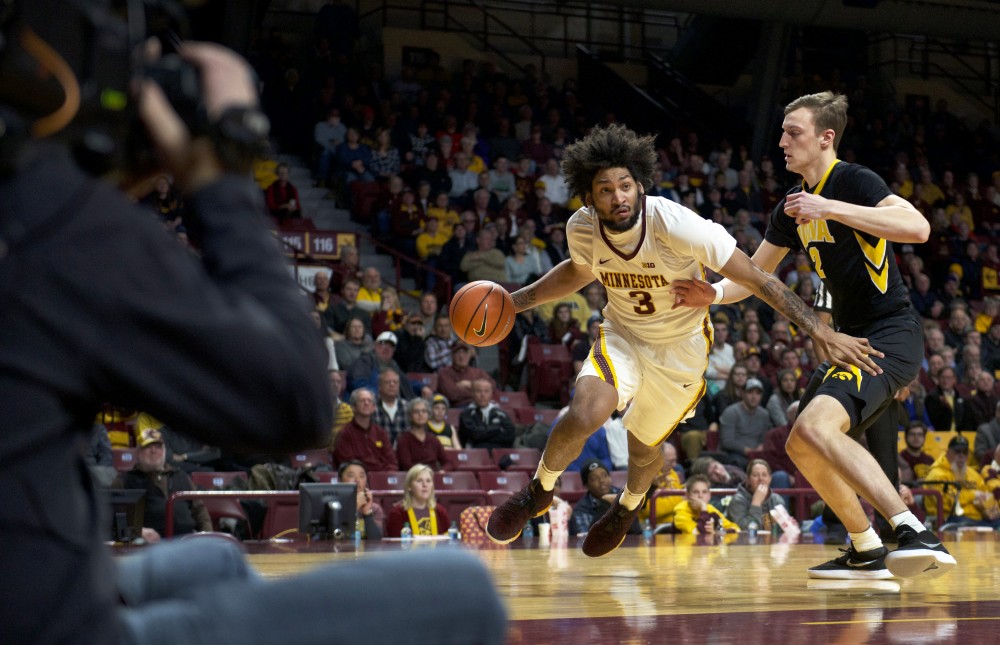 The camera follows forward Jordan Murphy as he maneuvers past Iowa forward Jack Nunge during a game at Williams Arena on Wednesday, Feb. 21.

The Gophers have not had their ideal season, but guard Nate Mason made sure his final game at Williams Arena ended the way he wanted.

Fans of Minnesota men’s basketball appreciated Mason running down the elevated floor of the Barn one last time, where he scored 33 points against Iowa. He hit most of his shots, 11-19, and commanded the floor to help his team earn a bounce-back, 86-82 victory.

The 6-foot-2-inch guard, who has gone through an eight-win season, an NCAA tournament berth, conference awards and injuries, added another resilient performance to a long list.

“The emotions were really high, especially after the senior introduction,” Mason said. “We just wanted to come out and do everything it costs so we can get this win. Me, [Bakary Konaté] and [Gaston Diedhou] knew it would be our last game on this court, and we just wanted to go out with a win.”

Iowa’s Isaiah Moss cut the Gophers’ once 20-point lead to two with three seconds left in the game, but Minnesota’s Davonte Fitzgerald made two free throws to keep the game out of reach, snapping the nine-game losing streak with a win over Iowa (12-18, 3-14 Big Ten).

“We came out, obviously, we were ready to go and played really good basketball for 38 1/2 minutes,” head coach Richard Pitino said. “Then we really got tired, they made some big shots, but proud of our guys.”

It looked like Minnesota (15-15, 4-13 Big Ten) would keep the game out of reach in the final minute, as the Gophers had an 11-point lead with 1:05 left on the clock. But Moss, who ended the game with 32 points, scored 14 points himself in the last minute to bring Iowa within a well-shot basket of the win.

The Gophers were leading 22-2 after Mason hit his free throw at 11:07 to play in the first. The best start all season was followed by a seven minute scoreless stretch, and the Gophers let Iowa back into the game at 22-13 with just under four minutes in the half, after they gave up 11 unanswered points and ended with a first half score of 31-19.

Mason stayed consistent on the line, hitting 8-9 from the charity strike.

“He was terrific,” Pitino said. “He did a lot of phenomenal things. His numbers you look at them from the points to the assists. What he’s done here over the course of four years, a guy who was a three-star player.”

Guard Dupree McBrayer, in his second game back from injury, had the second-most points with 16 and Jordan Murphy had yet another double-double with 10 points and 10 rebounds.

The other senior that played Wednesday, center Bakary Konaté, fouled out in the final minutes of the game, and walked off the Williams Arena hardwood with the fans shouting his nickname, “BK, BK, BK.”

“Honestly, I can not describe that feeling,” Konaté said. “It’s amazing.”

The Gophers will play their last game of the season on Sunday against Purdue, ending a tumultuous regular season for the team.

“Those three seniors embody what it’s all about,” Pitino said. “They’ve been through ups, downs, and they’ve never run and hide.”