The team wrestled in two meets in two different states on Saturday. 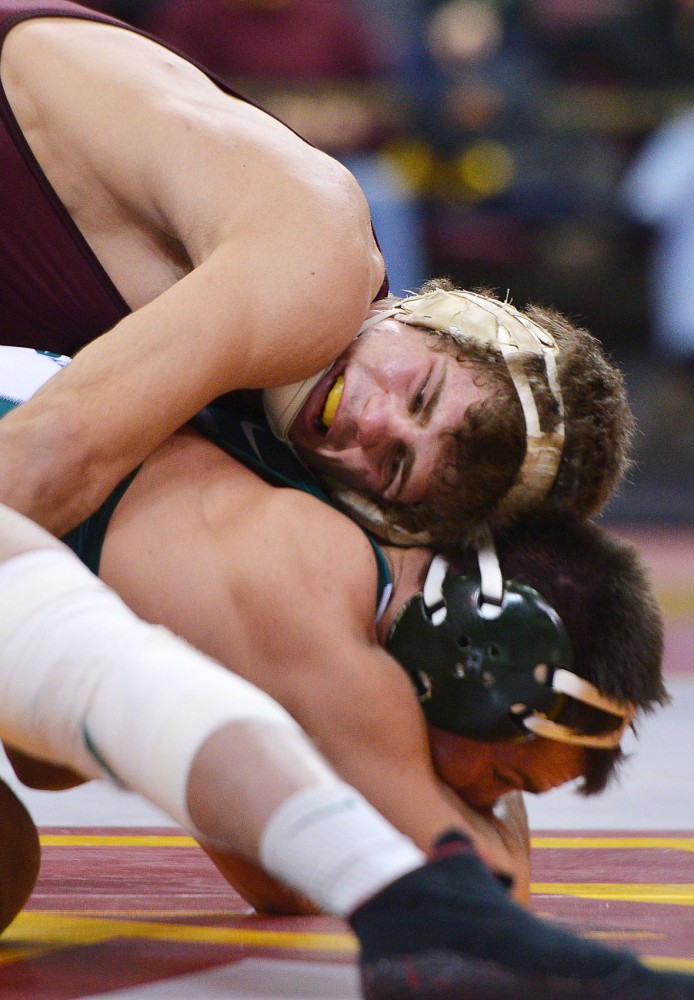 Hours of traveling didn’t seem to fatigue the Gophers on Saturday, as they defeated both Air Force and Wyoming.

The victories gave Minnesota its 11th- and 12th-consecutive nonconference dual meet victories since 2012.

“I am really proud of the guys,” head assistant coach Brandon Eggum said. “I thought it was a tough day overall, and we had wrestlers that stepped up and wrestled well.”

Redshirt freshmen Jake Short and Nick Wanzek competed in the first two dual meets of their careers, and they won both of their matches.

“[Jake and I] grew up together since first grade, and we have always been competing against each other,” Wanzek said. “I think that competition really made us better wrestlers and better athletes. We expect each other to do the best we can every match.”

Wanzek had to wrestle No. 15 Jesse Stafford of Air Force and No. 18 Dakota Friesth of Wyoming in the 165-pound weight class, winning a 9-3 decision and a 3-1 decision, respectively.

Redshirt sophomore Sam Brancale also faced stiff competition during the road trip, going against No. 9 Josh Martinez of Air Force and No. 8 Tyler Cox of Wyoming in the 125-pound weight class.

He ended up losing to Martinez, who recorded a technical fall, but he bounced back with a 17-11 victory against Cox.

“Sam made some good adjustments from the first dual,” Eggum said. “He beat [Cox] from Wyoming, and [Cox] actually beat [Martinez] about a week ago. So they are very comparable athletes. But he came back [from the first loss] and regrouped himself to get a really nice win.”

Redshirt senior Dylan Ness, who is ranked No. 1 in the 157-pound weight class, dominated his opponents.

“I felt pretty good [about my performances],” Ness said. “I kind of just had a mindset of going out there to work for a [pin].”

Eggum said it was easy to tell Ness was going to pin Wyoming’s Archie Colgan after a scramble.

“When he deals with a guy on his back, he usually wins it,” Eggum said. “You got to see it coming. Everybody on the bench can see it coming. It was a scramble for about 10 seconds [before] he put the guy away.”

Conrad Rangell, Logan Storley, Brett Pfarr and Michael Kroells were the other Gophers who won both of their meets on Saturday.

“It was nice to see young guys out there coming away with wins, especially with the tight matches,” Eggum said. “To do that early in the season with top-ranked guys is always a good sign for the coaching staff. We are happy to see that.”