A pedigree of pitchers, and Gophers 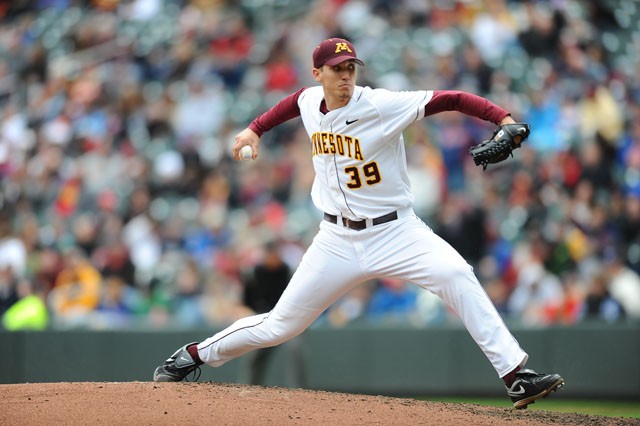 Sophomore pitcher TJ Oakes grew up with the GophersâÄô program. He and his father, pitching coach Todd Oakes, joke that the program helped raise young TJ and his older brother, Tyler.

Tyler pitched for Minnesota from 2006-09 before playing a year of minor league baseball in the Tampa Bay Rays system.

Now the previously Gophers-only family has a connection to a second Division I program.

Tyler has moved on from minor league ball and is in his first year as graduate assistant pitching coach for the South Dakota State Jackrabbits, MinnesotaâÄôs next non-conference opponent. The two teams were scheduled to play today at Siebert Field but the weather once again had the final say.

With snow in the forecast, the two teams will now play a home-and-home series next Tuesday at Siebert and Wednesday in Brookings, S.D.

âÄúIâÄôll be looking forward to it,âÄù TJ Oakes said of the quasi-family reunion. âÄúItâÄôll be fun to see my brother in the opposing dugout and my dad and him going out and facing off as opposing pitching coaches.âÄù

Todd, more commonly known as âÄúT.O.,âÄù said he doesnâÄôt think there will be any rivalry because TylerâÄôs position is so new. Just two years ago, his son was pitching in a Gophers uniform with a professional career on the horizon.

âÄúI think thereâÄôs this misconception that I had the boys in the backyard, had a pitching rubber back there and was constantly working with them,âÄù the eldest Oakes said. âÄúIâÄôd say 75 percent of the things they know today came from just watching the games. They were at the ball fields all summer and their mother probably took them to 50 or 60 games a year.âÄù

T.O. has been the pitching coach at Minnesota for 13 years, and for a year before that he served as the San Francisco GiantsâÄô minor league pitching coordinator. He was originally drafted by the Giants and played four years with their minor league affiliates before entering the coaching world in 1987.

While with San Francisco, he worked with then-minor league pitchers like Scott Linebrink and Minnesota Twins reliever Joe Nathan.

The family moved to Jordan, Minn., when he took a position on the GophersâÄô staff, and ever since the move, TJ said he knew he wanted to play here.

âÄú[I had known] for a long time, ever since I moved here in third grade,âÄù he said. âÄúFor 13 years IâÄôve been at the fields and around the guys. For 13 years I grew to know this program and grew to love this program. Ever since my dad took the job it was my dream to become a Gopher.âÄù

His dad is in his 24th year of coaching, his 13th with Minnesota, and he said this year is by far the most difficult heâÄôs faced since joining the coaching ranks.

With the sporadic playing time because of erratic spring weather and the collapse of the Metrodome in December, Oakes hasnâÄôt been able to find enough innings to get regular work for his bullpen.

Billy Soule leads all relievers with 22 innings, followed by Scott Matyas (17.1) and freshman Tom Windle (16.1). Soule and Matyas are the teamâÄôs most trusted relief options but Windle, who struggled in a loss Sunday, may been thrust into too many pressure-packed situations this year. He has allowed opposing batters to hit .303 off him.

T.O. expressed the desire to find capable arms for the stretch run and hopefully a Big Ten tournament run, but he said he needs to balance that long view with the short-term need to win games.

Picked before the season to finish first in the Big Ten, the Gophers are 11-15 overall, just 3-6 in the conference, have a relatively shallow bullpen and have struggled to find offensive consistency.

As it stands right now, Minnesota would be on the outside looking in on the Big Ten tournament. The top six teams in the conference make the tournament, and the Gophers are currently tied for last with Iowa.