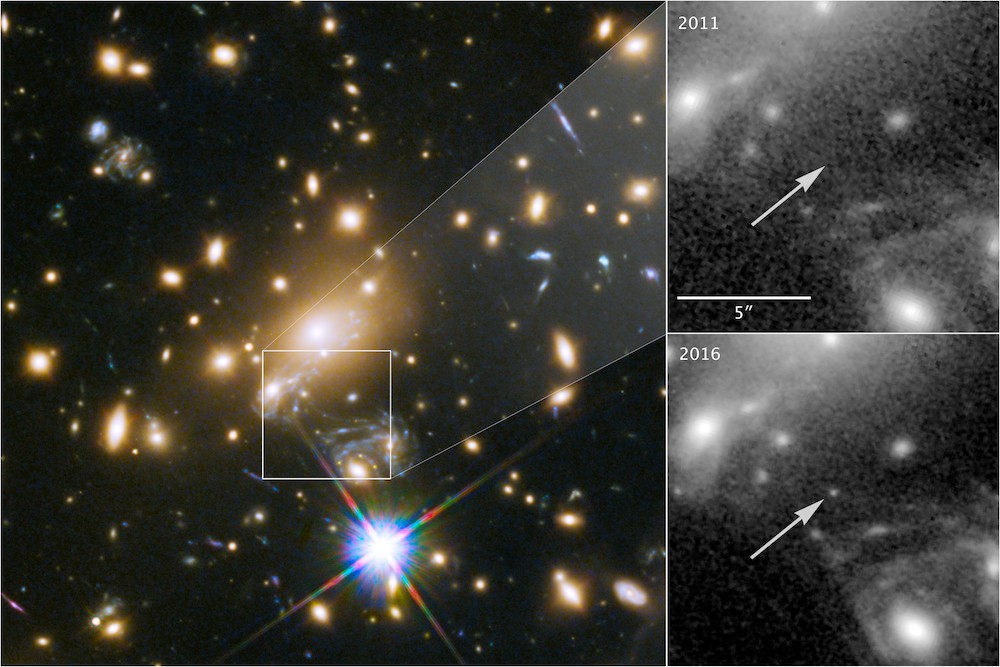 Courtesy of NASA/ESA and Patrick Kelly

This image composite shows the discovery of the most distant known star using the NASA/ESA Hubble Space Telescope.

A University of Minnesota-led research team spotted a star 9 billion light years away — the farthest star ever seen.

The discovery of the star Icarus, published in the journal ‘Nature Astronomy’ earlier this month, introduced a way for astronomers to look at singular stars in far-off galaxies. Scientists say these observations give a detailed analysis of the qualities of stars that have existed for billions of years.

Because the star is so far away and its light takes nine billion years to reach Earth, the star looks as it did when the universe was less than a third of its current age which is much earlier than ever before.

“I think this is the craziest thing because before we could only see singular stars from nearby galaxies like Andromeda or Milky Way,” said Patrick Kelly, a University astrophysics professor who led the international team of scientists.

Icarus is 100 times further from Earth than the next-closest star ever observed.

Astronomers can see this individual star because its light has been highly magnified by an intervening galaxy cluster through a process called gravitational lensing, said Liliya Williams, University professor in the Minnesota Institute for Astrophysics.

Any type of camera, from a smartphone to a telescope, requires photons — particles of light — to see, said Lawrence Rudnick, professor of astrophysics, who is in charge of the telescope in Tate Hall.

“The further something is away from us in space, the more the light is spread out,” Rudnick said. “The key with telescopes lenses is that they work by increasing the amount of light they capture.”

Before this discovery, astronomers could only observe far-away stars within clusters. The ability to see each individual star allows scientists to learn more about each star’s brightness, along with other characteristics that inform perceptions of what the universe was like earlier in its history.

“Even though it seems less efficient to observe the universe one star at a time, it’s like if people on a different planet used a telescope to look at Minneapolis,” Kelly said. “You might see more looking at the entire city, but you would learn a lot more about the city from observing individual people.”

In the 1990s, astrophysicists used gravitational lensing to see far-away galaxies, but the technique has since been neglected by many scientists, Kelly said.

“There were theoretical papers about this published 20 years ago, but no one really noticed or cared because they didn’t think it was possible,” Williams said. “We were caught off guard, but in a good way.”

Finding this star sets a precedent for more frequent discoveries in the future, scientists say. Kelly’s paper is the first in a collective goal among astronomers to document the details of every star in order to create a census of the universe.

“All of what astrophysics is, is understanding the world we live in,” Williams said. “There’s no useful information from this. You can’t make microwaves from discovering stars. This is to satisfy our curiosity about the universe.”