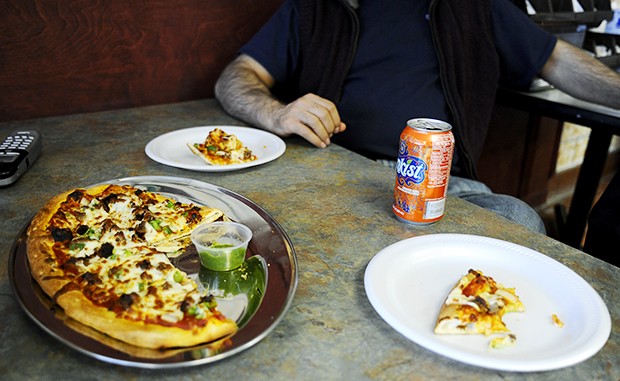 Crescent Moon Pizza opened at 15th and Como avenues across from Muddsuckers Coffee on Monday.

Meerweis Adidi, owner of Crescent Moon Foods in northeast Minneapolis, opened a second location for his restaurant Monday, called Crescent Moon Pizza. Adidi said he decided to open the second location because the popularity of his first Afghan restaurant brought customer requests for a location closer to campus. In response, Crescent Moon Pizza opened at 15th and Como avenues across from Muddsuckers Coffee. Among those customers, Adidi said, were students from the University of Minnesota, some of which stopped by for lunch the day it opened. Andrew Opitz, cultural studies and comparative literature lecturer at the University, was on his way home from campus Monday when he saw Crescent Moon Pizza was open. He decided to order food for takeout. Opitz said he had been to the restaurant in northeast Minneapolis and was pleased to see a second location open so close to where he lives. âÄúWe need good food in this neighborhood,âÄù he said. Opitz said he is optimistic about the future of the restaurant because it sells a quality product. Due to a desire to offer something different, Adidi started making Afghan pizzas, which became known as the âÄúfootball pizzaâÄù because of the elliptical shape of the pie. Adidi came up with the idea for the different shape of the pizza after learning to make bread in Afghanistan. When he moved to the United States, he started with a bakery and then translated his ideas into pizza. Out of a menu full of authentic Afghan cuisine, the pizza Adidi developed himself has become the most popular. His first restaurant makes about 100 football pizzas a day, he said. Adidi said he is worried about competition from other restaurants closer to campus, but the uniqueness of what he is offering gives him confidence. Pat Duffy, DuffyâÄôs Dinkytown Pizza owner, isnâÄôt worried about competition from Crescent Moon Pizza because the new restaurant is a little farther away from campus. He said Dinkytown doesnâÄôt need any more pizza places and something different would be a smart business venture. For now, Crescent Moon Pizza will be open from 10 a.m. to 10 p.m. and Adidi said he will see how business goes. The restaurant owner does not advertise either of his establishments, relying only on word of mouth. He said he wants to offer customers the best service possible and the best way to do that is to start out slow.