After losing to Iowa State in the 2008 NCAA Tournament, the Gophers took revenge on the Cyclones Saturday. 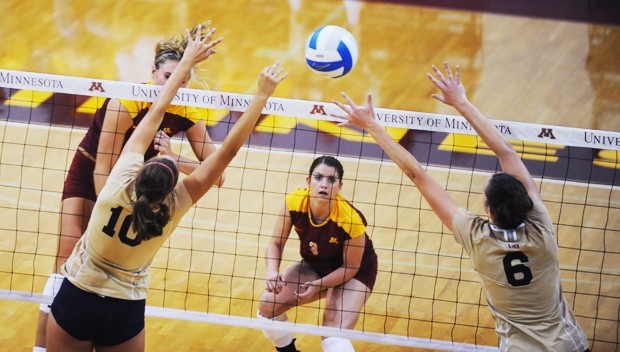 After starting the season with four games on the road, the No. 13 Minnesota volleyball team finally had the chance to show the home crowd what they can do when they hosted the Diet Coke Classic at the Sports Pavilion this weekend. The Gophers gave the Minnesota crowd plenty of reasons to cheer on the way to a tournament victory. Minnesota started the tournament by defeating Auburn on Friday night in straight sets, 25-11, 25-17 and 25-6 . The Gophers then cruised past George Washington on Saturday morning, winning again in straight sets, this time by scores of 25-17, 25-19 and 25-16. This set up a showdown Saturday night against undefeated No. 12 Iowa State. The Gophers came back from large deficits in the first two sets to win 27-25 in both. The Cyclones fought off a pair of match points to come back and win the third set 28-26. The Gophers grabbed an early lead in the fourth set and refused to let up, completing the upset with a 25-13 win. Junior Brook Dieter , who had 45 kills and 29 digs combined, was named the tournament MVP. Dieter said she was excited to be back home and was confident that the team could be Iowa State. Junior Lauren Gibbemeyer, with 28 kills, and senior Christine Tan, who had 40 digs were named to the All-Tournament Team . Senior transfer Taylor Carico also played well for the Gophers accounting for 87 total assists in her first home appearance since transferring from USC. Fellow senior transfer, Megan Wilson , also continues to provide leadership for the Gophers. Her 30 total digs may not be a huge number, but she was often making big plays when the team needed one. Freshman Tabitha Love continues to come into her own on the Minnesota front-court. She had 29 kills in the tournament, including 18 against Iowa State. The Gophers set the pace early in the tournament by taking a quick 3-0 lead in the first set against Auburn. After cruising by Auburn on Friday, Minnesota squared off against George Washington on Saturday morning. Dieter had eight kills in the first set to help set the tone for the Gophers who made quick work of the Colonials. Minnesota knew it was going to face much tougher competition against Iowa State in the championship match. For the returning Gophers, the memory of the Cyclones knocking them out in the second-round of the 2008 NCAA tournament was still imminent. The first set started with the Gophers taking a quick 3-1 lead, only to lose nine of the next 10 points. Kills by Carico, Love and Filho brought Minnesota to within 14-17. The Gophers came out of a team timeout trailing 21-16, but won six of eight points to bring the score to 22-23. Minnesota fought off a set point with a Love block, making it 25-25, and then created a set point of their own with a Dieter kill. Without missing a beat, the Gophers capped off the comeback with a Wilson kill, winning 27-25. Minnesota and Iowa State bounced back and forth early in second set. Blocks by Gibbemeyer and Carico tied the score at 13. Then the Cyclones began to pull away, scoring eight of nine points to take a 21-14 lead, but Iowa State committed errors on four of the next five plays and blocks by Wilson and Dieter brought the Gophers to within two at 22-20. After a kill by Gibbemeyer and another Cyclone error, the score was tied at 24. Minnesota failed to capitalize on the first set point, but Love would make sure Iowa State had no more chances as she finished off the set with a block and a kill as the Gophers once again won 27-25. The third set was nothing new as Minnesota trailed again, this time by a score of 16-10. The Gophers then scored four straight points on kills by Dieter and Love and pair of blocks by Gibbemeyer. Minnesota was once again able to come back and retake the lead at 19-18. Kills by Dieter and Tan gave the Gophers match point at 24-23, but the Cyclones simply would not go away quietly. They scored the three points in a row, handing the Gophers their first home set defeat with a score of 28-26. The Gophers didnâÄôt need to mount a comeback in the fourth set. They grabbed an early lead and kept it. Minnesota scored five straight points to take a 10-5 lead. A Wilson kill set up match point at 24-13 and the upset was finalized with a Love block, giving Minnesota the 25-13 win. Gophers head coach Mike Hebert described the match with the Cyclones as a war and said two âÄúmiraculousâÄù comebacks helped the Gophers take the battle. âÄúItâÄôs not that often that two teams want to win as bad these two did,âÄù Hebert said about the matchup between Minnesota and Iowa State. âÄúIt was my feeling that if we played competitively and pushed hard that at some point with our court and our crowd that Iowa State would wear down.âÄù Next weekend, the Gophers travel to St. Petersburg, Fla. to play in the Tampa Twice Tournament