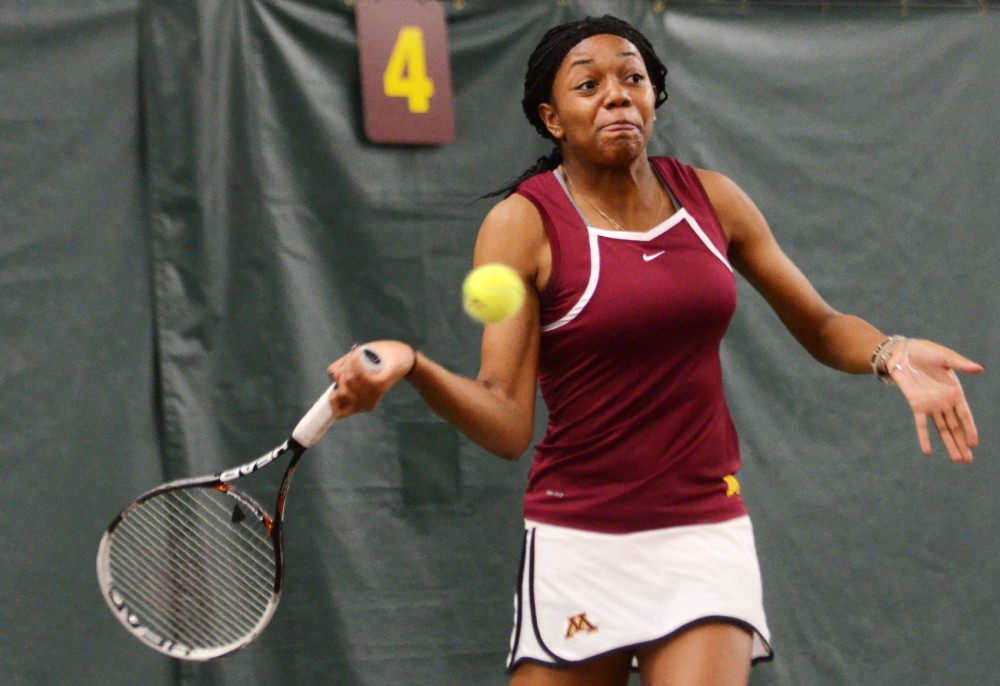 Jessika Mozia returns the ball against Montana on Jan. 19, 2013 at the Baseline Tennis Center.

The Gophers women’s tennis team kicked off its spring season with a pair of victories over the weekend.

In its first action in two months, Minnesota beat Marquette 5-2 on Saturday afternoon and squeaked out a 4-3 victory over Montana a few hours later at Baseline Tennis Center.

“We got tough when tough was needed,” head coach Chuck Merzbacher said. “We were real competitive in key moments.”

Jessika Mozia, a freshman for the Gophers, embodied that type of competitiveness all weekend.

Mozia admitted she had a few butterflies in her stomach at first, but the first-year player shook off her nerves. She went undefeated on the weekend while competing in both doubles and singles.

Merzbacher said he was impressed with Mozia’s play. He said her singles performances against Marquette and Montana helped the Gophers take control.

Minnesota swept the doubles matches against Marquette, but it needed a dramatic comeback from Mozia and Yuliana Umanets to claim a win at No. 2 doubles.

Mozia and Umanets trailed 4-0 early and 5-1 in a tiebreaker, but they battled back both times to earn the win.

“We just found a groove and kept fighting,” Mozia said. “We started slow, but we kept going, and losing was not in our mind.”

Minnesota dropped matches at No. 1 and No. 4 singles against Marquette, but it coasted to a 5-2 win.

In Saturday’s night session, the Gophers rode their singles play to a win against Montana.

Natalia Pintusava bounced back from a disappointing loss against Marquette with a 7-5, 6-1 win.

Merzbacher said the match against Marquette got away from Pintusava, but he said he’s confident in her ability at the No. 1 singles spot.

“I think [Pintusava] is playing well enough to do anything on that court at No. 1,” he said.

Tereza Brichacova escaped with a three-set victory at No. 2 singles, and Mozia continued her dominant start with a 6-1, 6-0 beatdown at No. 5 singles.

Merzbacher said his squad is not at 100 percent, and injuries continue to nag Alexa Palen and Doron Muravnik.

Merzbacher said his team will be more of a threat down the stretch when it is healthier.

“We’re not 100 percent yet, so we’ve got to fight for everything,” Merzbacher said, “We’re not what we will be in a month or two.”

The men’s tennis team beat Northern Illinois 6-1 on Sunday at Baseline Tennis Center in its first dual match of the spring season.

“We’ve been practicing a lot the last 10 days, so it’s nice to get into this atmosphere and put it into play,” head coach Geoff Young said.

The Gophers jumped out to an early lead with a clean sweep on the doubles side and never looked back.

Rok Bonin and Mathieu Froment continued their impeccable record as a pair. Bonin said the two have played together six times and have six wins to show for it.

He admitted he didn’t start off as well as he would have liked on the night.

Bonin collected a win in singles as well, but his doubles partner Froment was the only Gophers player to lose in singles.

“We were supposed to win, so it’s not that big of a surprise,” Bonin said. “But every win matters, and we are really excited.”