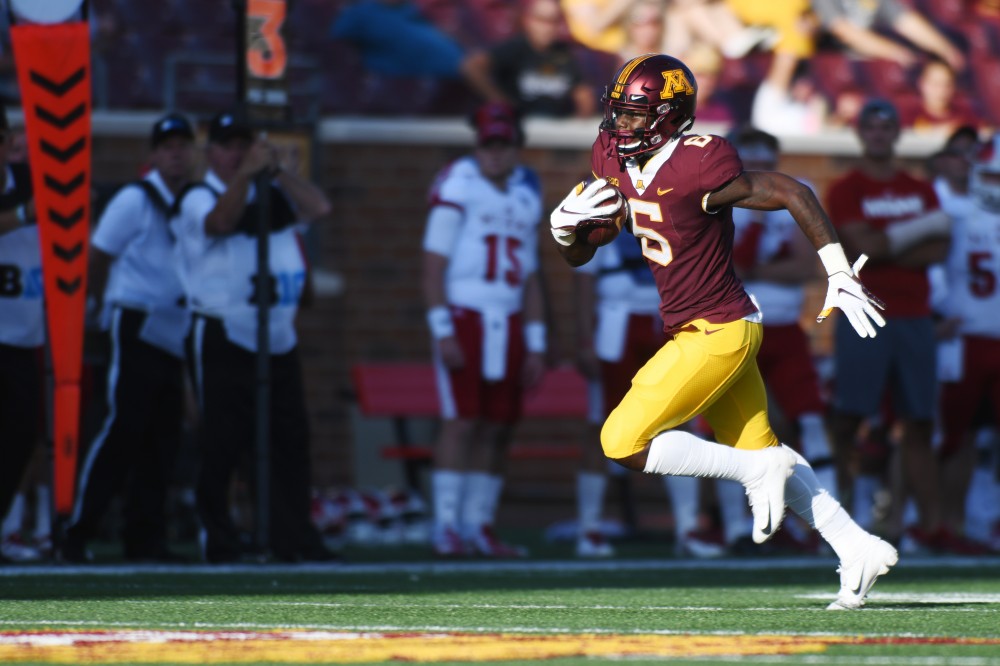 Minnesota’s top wide receiver made his way onto an exclusive program list Saturday.

The play that put him over the edge was a seven-yard touchdown reception in the first quarter when quarterback Zack Annexstad threw him a perfect ball in the flats to give him a lane to the outside. He dove into the end zone and into the history books as the 25th Minnesota player to reach 1,000 career receiving yards.

“That’s what Tyler does,” head coach P.J. Fleck said. “I thought he was exactly who he needed to be. He dominated the game. That’s what he does.”

“In all honesty, I give credit to the offensive line,” Johnson said. “I couldn’t have gotten the ball without them. And then my quarterback. He’s just got a lot of trust in me right now, and looking forward to keeping it moving forward.”

It was a hot and humid day, a combination not ideal for the quarterback-wide receiver connection. However, Johnson didn’t let it bother him, catching two touchdowns in the first half, along with 100 yards on seven catches. He slowed down in the second with just two more catches for 33 yards and one touchdown.

Johnson’s first catch of the second half was a five-yard touchdown from Annexstad to make it 26-3, which would be the final score.

Johnson caught one touchdown pass from Annexstad in the first quarter and one from Seth Green in the second quarter — both were for seven-yards.

Johnson said he doesn’t change anything in his approach when any one of the three quarterbacks is in.

“I trust all three of them. Whether its running the ball, throwing the ball,” Johnson said. “I know they trust me and I trust them as well.”

Freshman running back Bryce Williams, who was the main player in the ground game Saturday, had the second most receiving yards behind Johnson with 35 on one catch.

“He ran hard, he ran extremely hard,” offensive lineman Jared Weyler said. “But with any freshman there’s going to be failing, and he’s going to continue to grow.”

Minnesota had a total of 1,513 passing yards last year with nine touchdowns. So far this year, the Gophers have five touchdowns, all of which are from Johnson, and 579 receiving yards.

Minnesota will open up Big Ten play next week when they go to College Park, Maryland to take on Maryland (2-1).