The Gophers squandered their chance at a sixth NCAA title with a 7-4 loss to Union College. 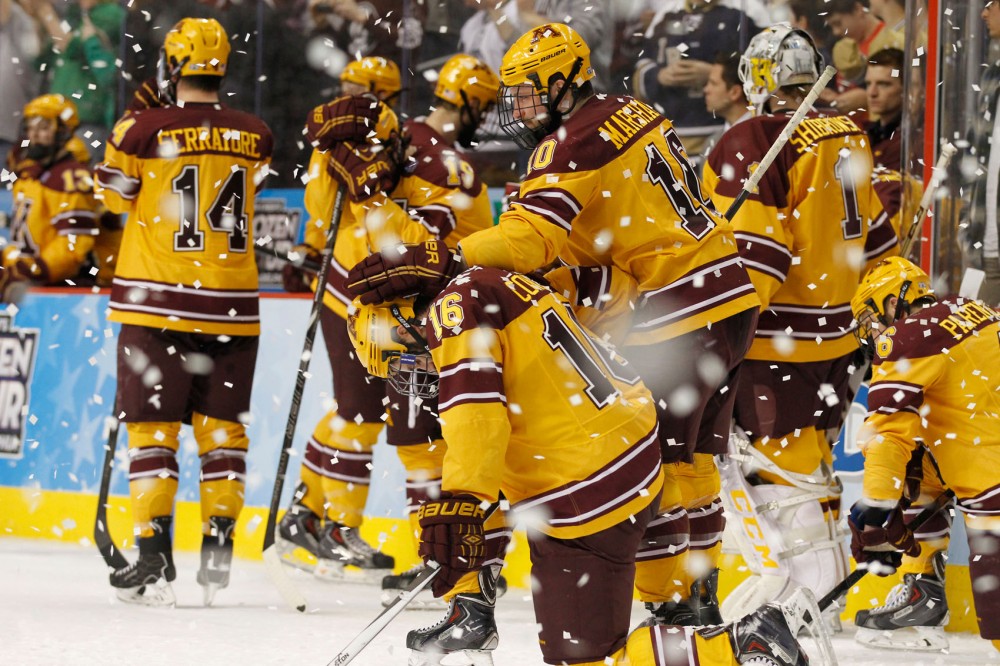 Minnesota's Ben Marshall rests his hand on Nate Condon after the Gophers lost in the NCAA championship 7-4 against Union College on Saturday evening in Philadelphia.

PHILADELPHIA — Gophers defenseman Brady Skjei was the first Minnesota player to kneel on the ice before the clock had even run out, Union players already clearing the bench.

Minnesota senior captain Nate Condon skated aimlessly around the goal that Adam Wilcox had vacated in favor of hunching over against the boards near his team’s bench.

In time, more players filtered out of the Gophers’ bench to join the heartbreaking huddle. Some, like Skjei and Condon,
needed consoling while others, like juniors Ben Marshall and Kyle Rau, offered pats on the back and comforting words into their despondent teammates’ ears.

Minnesota lost the NCAA championship 7-4 to Union on Saturday at Philadelphia’s Wells Fargo Center, missing out on its sixth national title as Union won its first.

It was a game marked by the classic “David and Goliath” disparities between the teams — a small underdog against a traditional national powerhouse.

Though the Dutchmen proved Cinderella stories are clichÃ© for a reason, Gophers head coach Don Lucia said the loss wasn’t because his team didn’t want the trophy enough — quite the opposite, in fact.

“Our guys tried,” Lucia said. “Sometimes you want to win too hard, too bad. You wanted to chase rather than just play your position.”

And with Union’s speed, the usually fast Gophers found themselves with the unfamiliar task of playing catch-up for most of the game. Minnesota’s eight penalties to Union’s five didn’t help its cause.

The Gophers struck first about three minutes into the first period, from freshman forward Justin Kloos, but Union responded seven minutes later from Shayne Gostisbehere. Gophers junior forward Sam Warning put the Gophers ahead again about 40 seconds later, but that would be the last Minnesota lead.

The Dutchmen scored three times in less than two minutes toward the end of the period. Mike Vecchione, Eli Lichtenwald and Daniel Ciampini netted goals after Union unleashed a barrage of shots onto flailing Wilcox.

“It just got away from us,” Kloos said. “We hung our goalie to dry. He’s been our best player all year, and for us to put him through that was kind of disappointing.”

Minnesota cut Union’s lead to a single goal about a minute into the second period from freshman forward Taylor Cammarata and prevented Union from piling on any more goals heading into the third period.

“We were expecting them to shove it right back in our face,” sophomore defenseman Mike Reilly said. “And they did.”

A glimmer of hope came from freshman forward Hudson Fasching’s goal on the game’s only power-play score with minutes to play.

To the Gophers, it was the moment when everything could have changed.

“We kind of had hope,” Fasching said. “There was four-and-a-half minutes left. I was trying to get something going. Obviously it just wasn’t enough.”

Union’s Kevin Sullivan dashed that hope by scoring with less than two minutes to go. Wilcox dropped his forehead to the ice and stayed there for a few beats after the puck slipped past him.

“We didn’t get the result we wanted, but we had a great year — one of the better years in Gopher history,” Reilly said. “So I’m just proud of the guys and what they’ve accomplished.”

Fasching said he was sad to see the season come up short but was pleased with his freshman class, which scored three of the Gophers’ four goals.

As confetti rained down after the buzzer, Gophers players’ words all centered on thanks to seniors, excitement for the future and pride in each other.

“We’re a family. We’re brothers,” senior forward Tom Serratore said. “It’s sad to say goodbye to something. … You never want it to end.”

The Gophers got to the title game in the most dramatic way possible.

Minnesota senior defenseman Justin Holl scored his first goal of the season shorthanded in the last second of the game to hand the team a 2-1 win over longtime rival North Dakota.

Gophers players mobbed Holl in a huge dog pile at center ice — a stark contrast to the reaction after the final seconds ticked away Saturday.

North Dakota players stood listless and lost as the final horn sounded, and though their eyes were noticeably puffy, remained stoic in the postgame press conference.

“Disbelief. Straight disbelief,” North Dakota forward Mark MacMillan said. “I think all of us on the bench when it crossed the goal line said, ‘No way it went in before the buzzer.’ And unfortunately, that wasn’t the case.”

Minnesota players were also fairly subdued in the postgame press conference — business as usual even after another Sportscenter-worthy goal.

“It’s a great feeling,” Holl said, “but it doesn’t mean anything if we don’t do well on Saturday.”

The Gophers took a penalty with less than two minutes to play and were seemingly just trying to kill the penalty and force overtime.

Holl surprised everyone with his goal amid traffic after Rau’s deflected shot fell to his skate.

North Dakota outshot the Gophers 37-28. Lucia acknowledged that in postseason, an unbelievable goal or fluky bounce of the puck can be the difference between a season’s end and a national title.

While an unexpected goal sent them to the final, the Gophers couldn’t blame the same for their championship loss. They didn’t look as sharp as they had two weeks ago in the regionals, when they played the best they had all season.

Still, whether or not they peaked too soon, Lucia said this year’s young team exceeded his expectations.

“I certainly probably wouldn’t have thought we’d be here on the last day of the year,” Lucia said Saturday. “I told them in the locker room, ‘This is one of the most enjoyable years I’ve had in coaching.’ A great group of kids.”