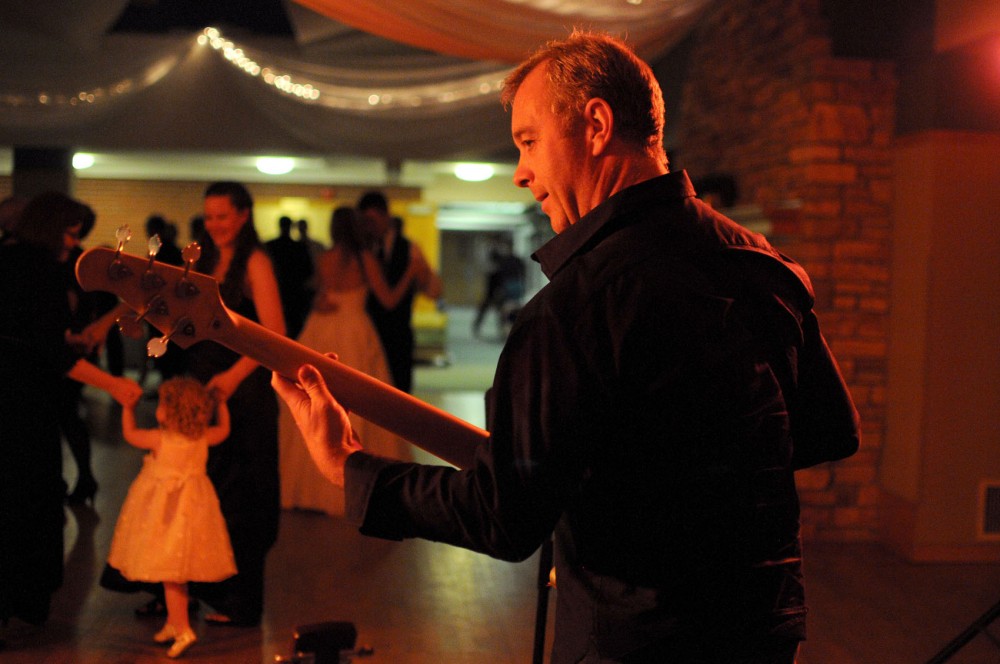 Dan Gaarder, guitarist and vocalist, preforms with Trailer Trash at a wedding in Edina, Minn. Trailer Trash has been performing together since the ’90s.

They’ve been playing regular gigs at Lee’s Liquor Lounge since 1993, and after nearly two decades, country-roots band Trailer Trash is still loving every minute they spend on the bar scene.

Although front-loading drinks before shows has been replaced by talk of kids in college and the benefits of bifocals, these guys haven’t lost their spunk. The six-man band still cranks out some booty-movin’ honky-tonk tunes.

A&E caught up with Trailer Trash before their gig playing at a wedding reception last Friday. In true rock band style, the band let lead singer Nate Dungan be the most vocal.

You guys are known as the “human jukebox.” Do you really take requests when you’re on the stage?

Nate Dungan: For money. (Laughs) You know if you go to New Orleans and you walk into a bar and you give them a request and you say, “Play ‘The Saints Go Marching In,’” that’s a twenty-spot right now on the bandstand. Of course they’ll play it for you.

So that’s the tradition we come from. Of course we’re going to play a song for you — if we know it. Even if we don’t know it, we’ll wing it.

We’ve all come from bands that would play original [songs]. You write up two to three sets, an albums worth, and you rehearse and rehearse and rehearse. For me, personally, it was emotionally draining. Because then you go and play a club gig and you play 45 minutes or an hour on a Thursday night, and youur friends: All 20 of them, if you’re lucky, show up and, thank God, and then they’re like, “You rock, dude,” and you’re exhausted. And then you have to wait around for another six weeks to do it again.

I got so frustrated doing that because all I wanted to do was take a crowd all the way. I wanted to really pack a room, and rock it and I didn’t want to mess around with being hip.

Dave Weeks-Wynne: We all did that when we were young, and that’s why we’re in a band like this.

We said why don’t we take a VFW and do it downtown. And that’s what we do. It clicks because people don’t get that kind of entertainment very often. They look at us like we’re some kind of show band. It couldn’t be further from the truth. This is what you do — in any VFW, any legion.

Dungan: The big secret is that Minnesota is a huge country market. You don’t know that, don’t realize that when you’re downtown. Hennepin and Ramsey County are very “multi-culti.” Lake Street is a Third World Cub Store now. It is really cosmopolitan. Especially in Minneapolis, you’ve got world-class arts, culture, cuisine. It’s amazing the variety of things to do and see. Well, you go 20 to 30 miles in any direction and it’s country country. As soon as you get anywhere out of the 494 ring, it’s straight up Garth Brooks, Faith Hill, Carrie Underwood — and that’s what people love.

Do you guys get tons of regulars at your shows at Lee’s?

Weeks-Wynne: Lots of friends come all the time. It’s a pretty rabid bunch.

Dungan: After playing Lee’s now for 19 years, we’ve cycled through so many waves of fans. They come out and see what they see and get what they need to out of the scene. Because that’s what it really is — it’s a scene. I don’t think we’re that great, but what happens there is great.

What’s the biggest difference playing 20 years ago versus playing now?

Dungan: [At first] the general public did not know the path to the door. It was a little pocket of isolation and the crowd that we got when we first started was really, really diverse.

I can remember playing a Buck Owens songs to a bunch of gals from the North side doin’ “the butt” out there on the dance floor. One of ’em got up and sang a song with us … I don’t know what she sang, but it sounded great.

It was the last of rock ‘n’ roll anarchy. There was a little bit of that good ol’ edge. There was some straight-up freaky fun behavior goin’ on. There was no bouncer. Lee’s didn’t a bouncer until about ’98. He finally got a frickin’ bouncer, because by then, it had been discovered by the suburbanites. It just became more of a stop on the circuit.

What are the future plans for Trailer Trash?

Dungan: Let’s try and figure out that question fellers … There are not too many bands out there that do what we do — this wide variety of country, rock, swing, pop and occasionally a disco or polka number. It’s wacky what we do.

Weeks-Wynne: It does take an odd cat to make this thing work.

Dungan: I live to hear this band play. It’s a really good band, and there’s not too many bands that can do the kinda [expletive] we do anymore. I wish somebody would come and knock us off.