Minnesota loses to Michigan on Senior Day; tournament chances up in the air 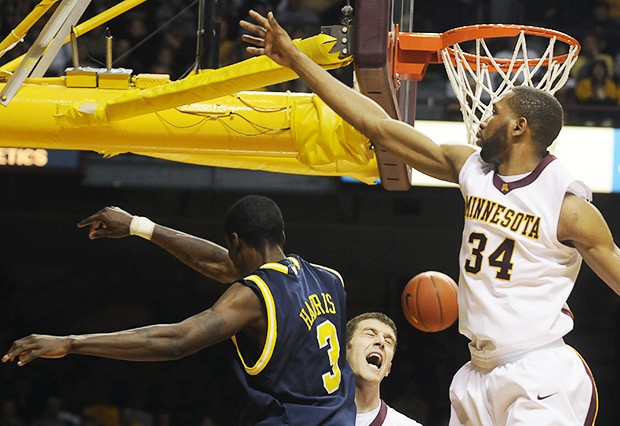 The Big Ten tournament just got more interesting. The Gophers missed a chance to essentially clinch an NCAA tournament bid Saturday afternoon, losing their final regular-season game at home to Michigan, 67-64. Now, they may need a win or two in next weekâÄôs conference tournament for an at-large bid. Head coach Tubby Smith acknowledged that the loss puts âÄúa lot ofâÄù extra pressure on the team going into the single-elimination conference tournament. âÄúYou never want to lose any game, but especially one with the importance of this game as far as how weâÄôre stacked up with the Big Ten tournament and postseason implications,âÄù Smith said. âÄúA lot of things were on the line.âÄù The Gophers blew a 12-point, second-half lead to the Wolverines despite shooting 55 percent from the field and outrebounding them 30-13. Four different Gophers players finished in double-digits âÄî- Lawrence Westbrook (16), Ralph Sampson III (13), Damian Johnson (12) and Jamal Abu-Shamala (10) âÄî but the same ball-handling problems that have hurt them all season brought them down again. They finished with 18 turnovers, which led to 17 Michigan points. âÄúObviously, we have too many people handling the ball,âÄù Smith said. âÄúI guess some guys you canâÄôt let dribble the ball. You tell them, but I donâÄôt know why a guy would dribble in the post when you have it right there, or I donâÄôt know why a guy would just take it off his foot. ThereâÄôs no reason to have 18 turnovers at home when theyâÄôre not pressing.âÄù Laval Lucas-PerryâÄôs three straight 3-pointers were the turning point in the second half, cutting a 10-point Gophers lead to 4 with less than 10 minutes left. MichiganâÄôs top three scorers in the game âÄî Lucas-Perry, Manny Harris and DeShawn Sims âÄî combined for all but 2 of its second-half points. The Gophers cut the lead to 3 twice in the final 1:04. After a Harris miss with seven seconds left, Westbrook got the ball and raced down the floor, but as he pulled up for a long 3-pointer, Smith called a timeout to setup a play. The whistle was drowned out by the announced crowd of 14,625, and Westbrook swished the awkward jumper with 4.1 seconds left. The crowd erupted, thinking Westbrook had tied the game, but the shot was discounted. Westbrook got the ball coming out of the timeout, but his shot, which was even further away and more off-balance, didnâÄôt touch the rim. âÄúI know that doesnâÄôt help coaches sleep at night,âÄù Michigan head coach John Beilein said of the timeout call. Added Westbrook: âÄúI thought [Smith] was going to let me go, actually, because there were only six seconds left and when I dribbled I got into a rhythm and hit the shot, but he called a timeout. ItâÄôs kind of like in football when youâÄôre about to kick a field goal and they call a timeout.âÄù On âÄúSenior Night,âÄù Smith started seniors Jonathan Williams and Shamala. He also stuck with the modified lineup of Blake Hoffarber and Devoe Joseph as starting guards, while Westbrook and Al Nolen began the game on the bench. The start for the seniors was more than a token nod, too, as Shamala played 23 minutes and Williams played 16. Shamala had five rebounds and his 10 points tied his season-best mark in a Big Ten game. âÄúItâÄôs been fun coaching those guys,âÄù Smith said. âÄúIâÄôm looking forward to coaching them a few more games.âÄù