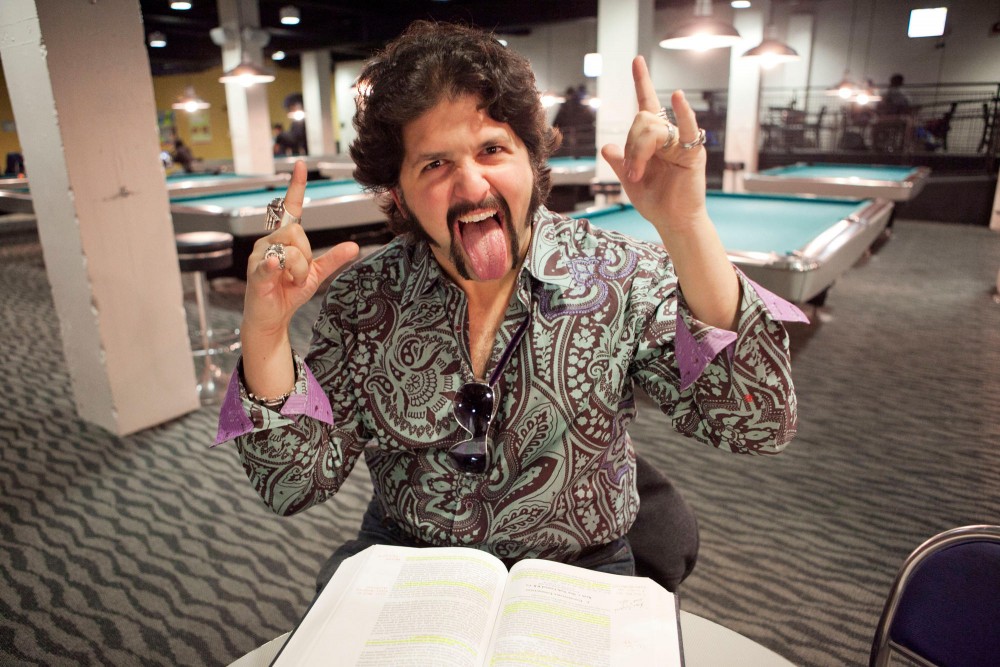 Professor Bobak Ha'Eri shares his experiences and diverse path to law Tuesday morning in Coffman Union. In the style of Elle Woods, Ha'Eri's admission essay for law school had the personality and attitude he's demonstrated throughout his careers and current teaching style.

During Bobak HaâÄôEriâÄôs first teaching experience, he showed students how to correctly put a condom on a synthetic banana.

This semester, the 32-year-old is teaching an honors seminar to University undergraduates on how to think like a lawyer.

Even though he can think like one, he doesnâÄôt dress like a cookie-cutter lawyer. Wearing a bold paisley shirt, he prefers to, as he said, âÄúpimp that [expletive].âÄù

Everything from HaâÄôEriâÄôs thick silver rings to his law specialty is nontraditional, he said.

He specializes in getting medical devices through the FDA, he said. After his graduation from the University Law School in 2005, HaâÄôEri, who was pre-med for his first semester of college, took cases on wounds that didnâÄôt heal.

âÄúPart of the reason I became a lawyer is so I wouldnâÄôt see this [expletive],âÄù he said. âÄúI didnâÄôt like blood.âÄù

But he continued working as an in-house lawyer at Arobella Medical, LLC, until 2010, which allowed him to be an expert witness in a case about complications with vaginal mesh, which he said is a type of scaffolding designed to heal a vagina that is prolapsed or falling out.

âÄúI wasnâÄôt expecting there to be a vaginal mesh joke at least once a class period,âÄù said Sam Hughes, a student in his class.

HaâÄôEri canâÄôt go five minutes without swearing, even in the classroom. He says it emphasizes points better.

With that personality, itâÄôs no surprise that his students rave about who they anticipated would be a stuffy law professor.

Hughes, a political science and communication studies sophomore, said he hasnâÄôt once found himself bored during any of the two-hour-long class sessions. He said he enjoys the rapid-fire questioning and quirky cases the students study.

She said HaâÄôEri uses a conversational teaching method to engage his students. And while she realized she didnâÄôt want to attend law school, she said she still enjoys the class a lot.

âÄúIt was the most valuable class I could have taken for myself,âÄù she said.

Pamela Baker, with the University Honors Program, said HaâÄôEri was referred by his wife, who has taught honors before. She said many honors seminar professors are attracted in this manner.

âÄúWe try to make connections in whatever ways we can,âÄù she said.

Baker said itâÄôs critical for honors seminars to teach topics that are typically outside of the normal curriculum.

HaâÄôEriâÄôs seminar gives students a taste of what law school is truly like, he said âÄî something that pre-law students are missing.

ItâÄôs an opportunity to teach prospective law students about how different law school is, he said, from the difficulty of the readings to the Socratic method, a form of actively questioning students.

HaâÄôEri, who has taught first-year students at the Law School since fall 2009, said his teaching method is âÄúcasual.âÄù He said professors need to be more engaging and interactive to help their students succeed.

âÄúSome professors make things too serious because they think they have to be,âÄù he said.

Students in his seminar study cases in their textbook in an attempt to determine what the law is. âÄúItâÄôs like reading a novel and then pulling out the theme,âÄù he said.

They are only studying tort law, which covers civil wrongs âÄî âÄúany time someone slips on a banana, any time a car crashes,âÄù he said.

HaâÄôEri is a self-described encyclopedia. He reads the New York Times every day because itâÄôs like âÄúcatnip to someone like me who likes to learn random facts.âÄù

HeâÄôs been a movie extra and featured in a music video by the Butthole Surfers. He said he pulled an Elle Woods (âÄúLegally BlondeâÄù) and included that on some of his rÃ©sumÃ©s when applying to law school.

He is an active Wikipedia contributor, a participant in an online forum for a video game system and an inventor of a new way to manufacture beverages.

HaâÄôEri said he has been interested in taking âÄúclinicalâÄù photos of structures, scenery and objects since he was a kid. Instead of boring people with them, he said he contributes them to Wikipedia so he can share them with people who care.

His photos are often published in magazines and articles, like the media guide for the 2010 Winter Olympics that featured his photo of the Vancouver Convention Centre.

Through his job at a medical device company, HaâÄôEri created a way to clean ballast tanks on ships using an ultrasound.

HaâÄôEri and his wife are avid travelers âÄî the coupleâÄôs last excursion in February took them to India and the Maldives.

During his trips, which have included visits to all the continents except Antarctica, heâÄôs met up with some of the friends he made in the online forum at neo-geo.com, a site devoted to a niche video game system.

How Minnesota hooked him

HaâÄôEri was born in Toronto but grew up in Bakersfield, Calif. âÄî âÄúthe armpit of California or the bastard child of LA and Texas,âÄù as he sees it.

He attended the University of Southern California and graduated with a bachelorâÄôs degree in international relations in 2000. He said he graduated a year early so he could have such a âÄúradâÄù year on his rÃ©sumÃ©.

He spent the following year working in California at the Democratic National Convention, where he was quickly hired after he graduated. On his 54th floor corner office, he was in charge of five interns.

Shortly thereafter, he jumped onto the Al Gore-Joe Lieberman campaign, setting things up for the candidates like motorcades and building crowds.

After his stint volunteering for Planned Parenthood, HaâÄôEri abandoned his stomping ground of California in 2002 to weather the âÄúcuddlyâÄù accents and extreme temperatures of Minnesota.

In his first year of law school at the University, he met his wife of more than a year. Tuesday night, his wife went into labor with their baby boy.

HaâÄôEri stayed in Minnesota because his wife is a native âÄî she went to Hopkins High School and attended the University for her undergraduate degree.