Some routes will see tweaks, while the Route 50 bus line will be discontinued. 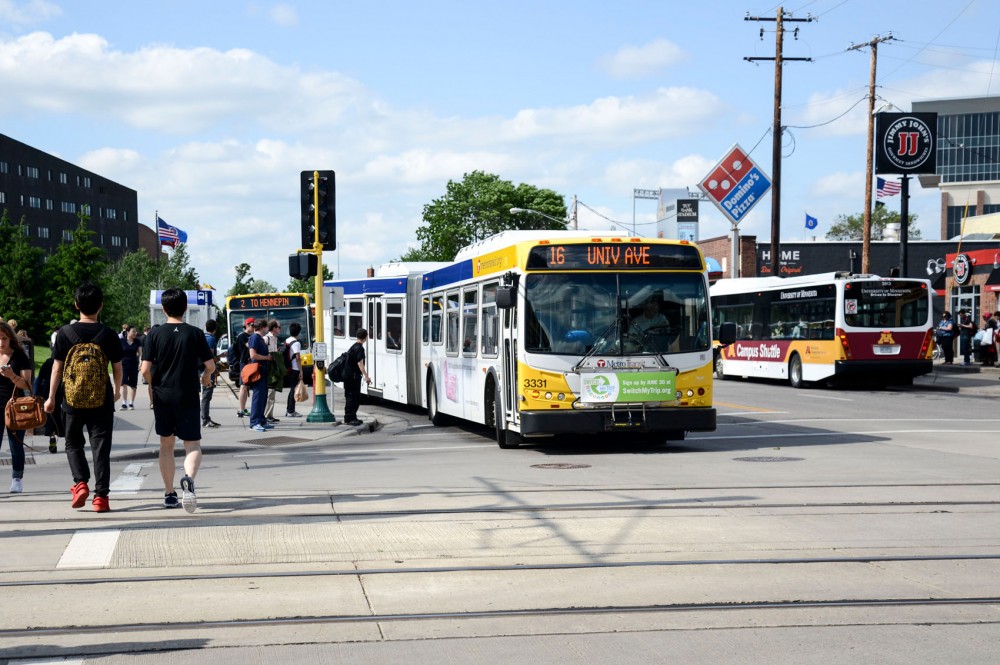 The Metro Transit bus route 16 turns onto Washington Avenue on Monday. The Metro Green Line's grand opening is June 14 and will affect numerous routes that service campus, including the 3, 16 and 50.

Beginning next Saturday, Metro Transit bus Route 50 will be discontinued, and routes 3 and 16 will undergo changes. The University’s Parking and Transportation Services is also weighing changes to Campus Connector routes after a student opinion survey this spring.

In total, 17 routes around the Twin Cities that connect to the Green Line will change. Route 50, which runs through campus to downtown Minneapolis and St. Paul in either direction, will be cut altogether and replaced by the Green Line.

The 50 used to connect campus with a commuter stop called Huron Station. But when the route is axed, a new local bus will replace that connection, according to a Metro Transit report.

Route 3, which connects the Como neighborhood with the West Bank via 15th Avenue Southeast, will remain mostly the same, but its path in downtown Minneapolis will change slightly.

And come June 14, Route 16 will become a “feeder” route for the Green Line, the Metro Transit report said. It will still provide local service along University Avenue between Oak Street Southeast near campus and downtown St. Paul, with the Green Line replacing the 16’s late-night service.

The route’s frequency will also reduce, running every 20 minutes, down from every 10 minutes on weekdays before the light rail-prompted changes.

The University is also gearing up for potential busing changes by reassessing its Campus Connector routes.

However, these possible route changes aren’t solely based on the Green Line’s opening. They’re also in response to students’ frustrations with bus route changes that occurred after Washington Avenue reopened during spring semester.

University Parking and Transportation Services has been working with the Minnesota Student Association, the Office for Student Affairs and students to brainstorm new routes for connectors.

“That bus system was not responsive to student needs,” said Chase Taylor, the MSA member who headed the survey.

“We’re looking at the information we gathered over the spring term,” said Bill Stahlmann, PTS’ assistant director for Fleet Services. “We will continue to evaluate and tweak it and change it depending on how it all works out with people.”