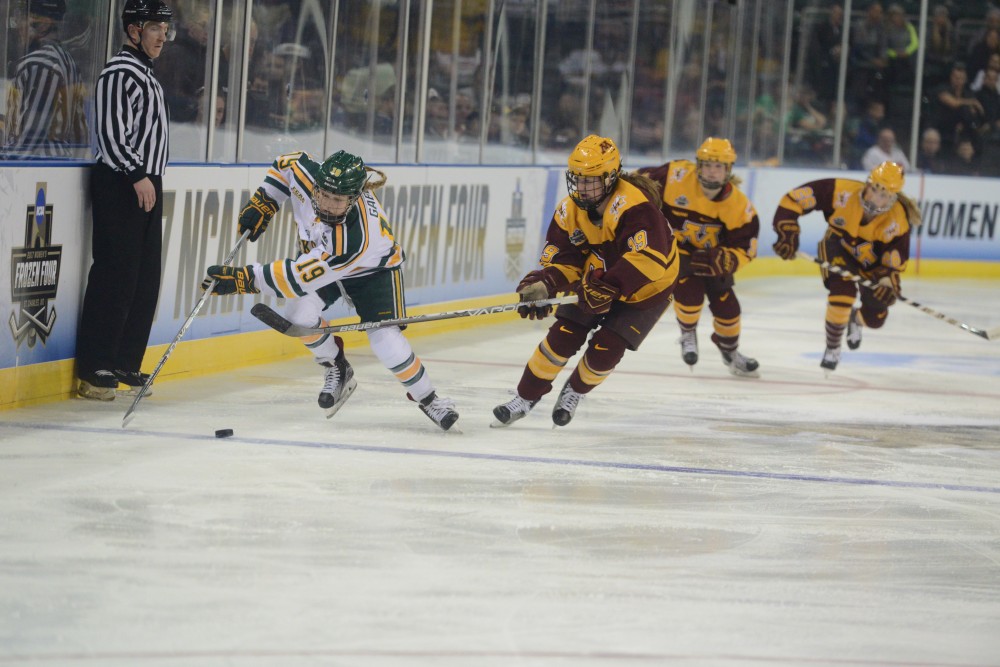 After a 4-3 national semifinal loss to Clarkson University on Friday, Stecklein will leave the Gophers as one of the most storied players in program history.

“It’s been a great four years at Minnesota, regardless of how it ended,” Stecklein said. “I’m gonna miss these girls, but it’s been the best four years.”

Along with Stecklein, the Gophers lost five seniors earlier than they would have hoped after friday’s loss, including a top defensive pairing, and four forwards.

Hope, however, is not all lost for Minnesota.

The Gophers return the regular season NCAA scoring champion in Kelly Pannek, who will lead her team as a senior next year.

“Any time you lose a senior class it’s really hard – I mean, they’re some of my best friends,” Pannek said. “Just to see how they love this team has been really fun to be a part of. We had two sophomores score goals tonight [Sophie Skarzynski and Sarah Potomak] and we have some really talented freshmen.”

In its offensive corps, Minnesota also returns Caitlin Reilly, a grizzled veteran who has a knack for finding the net, Sophie Skarzynski, a talented utility player, and Alex Woken, a highly-touted recruit whose freshman year was cut short due to injury.

Freshman forward Lindsey Agnew saw limited impact in her first year, but will look to provide a larger contribution in her sophomore season.

Finding a pairing to replace Stecklein and defensive partner Megan Wolfe will be no short order, but Minnesota has plenty of players ready to fill the holes left behind by their predecessors.

Sydney Baldwin saw significant time on the Gophers back line this season, as well as skilled freshman Patti Marshall, who sealed Minnesota’s Frozen Four berth with the only goal in its quarterfinal match-up against UMD.

But, the biggest question mark comes from the international stage.

Sarah Potomak had a breakout sophomore season, and finished second on the team with 53 points. She would return as a clear difference-maker for Minnesota.

The impending 2018 Winter Olympics say otherwise for Potomak, as her status as a top Canadian forward could bring a redshirt year, and wouldn’t see her return until the 2018-2019 season.

“Hopefully, Sarah’s doing some bigger things [next year], but I would love to play with her again, she’s so fun to play with, so dynamic, and so sneaky. I can’t say enough great things about her, and her future is so, so bright,” Pannek said.

Despite the uncertainty and the departures, the Gophers look to build on a mostly solid foundation and get back en route to another national championship.

“It’s gonna be hard to lose those guys,” said head coach Brad Frost. “With a program like ours and other top teams, you’re losing great players every year and it’s our job as coaches to bring some great ones in and develop the ones we have. We’ll be okay.”