The Gophers swept Michigan on Friday and Saturday at 3M Arena at Mariucci to move to the semifinals next weekend. 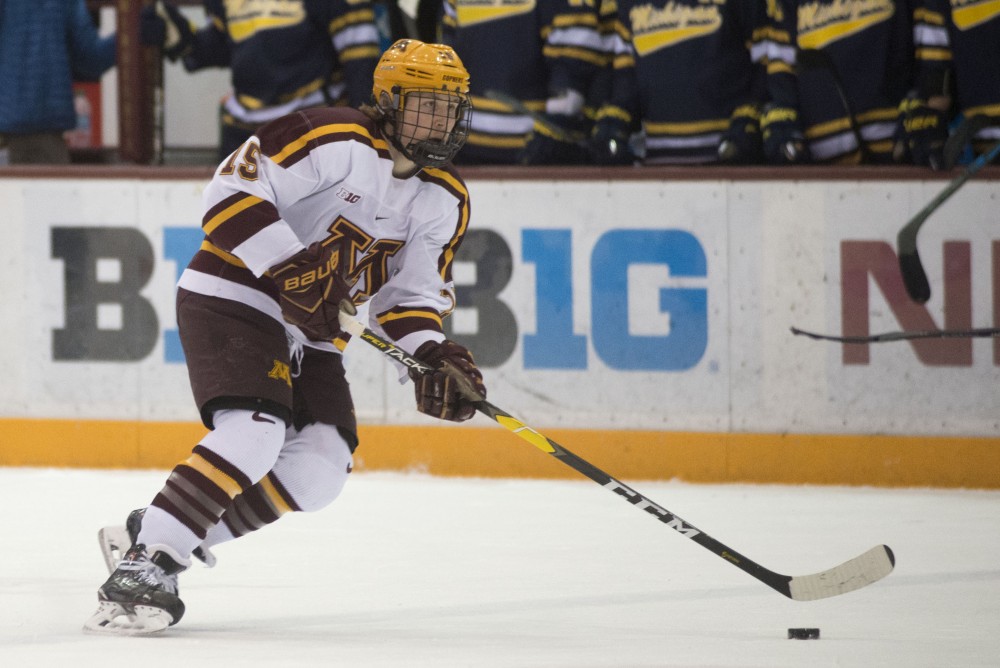 Junior Rem Pitlick skates with the puck on Friday, March 8 at Mariucci Arena in Minneapolis.

A come-from-behind win on Friday built momentum for the Gophers that they carried into Saturday’s match against the Wolverines.

Minnesota (18-15-4) scored three goals in the first period and finished with a 4-1 victory over Michigan (13-16-7) at 3M Arena at Mariucci on Saturday to complete the sweep in the Big Ten Tournament quarterfinals. The Gophers will play in the semifinals next weekend against Notre Dame.

“[I’m] very happy how we came out and took control of the game. That was a critical piece of the whole night,” said Gophers head coach Bob Motzko. “We’re playing good hockey, and … we have to have the mentality of moving on.”

After letting Michigan score the first two goals on Friday, Minnesota took its turn piling on the early goals. Gophers forward Rem Pitlick scored the third goal of the game with 4:17 to play in the first period on a top-shelf wrist shot. Then, late in the second period, Pitlick scored a power play goal with a one-timer slap shot assisted by line mate Tyler Sheehy to bring the lead to 4-0. Pitlick tallied four points in the two games against Michigan over the weekend.

Mat Robson, Minnesota’s goaltender, was looking for his first shutout of the season late in the third period, but Michigan’s Adam Winborg dug a rebound into Robson’s net with 6:21 left in the third to make it 4-1. The Gophers’ other goaltender, Eric Schierhorn, has one shutout this season in the second game against St. Lawrence in November.

“It’s no secret, [Robson’s] a great goalie. He helps us out a lot … enough said about that,” Pitlick said. Gophers sophomore forward Scott Reedy made it 2-0 with 7:18 left to play in the first period when he made the best of a blind pass from a Michigan defender in front of the net. He caught the puck a couple stick lengths away from the net, gained control, spun around and buried it in the net. It was his seventh goal of the season.

In the first six minutes of play, Gophers’ forward Tommy Novak beat a defender on the outside, skated in front of the crease and deposited the puck into the back of the net for his fourth goal of the season and a 1-0 lead.

Gophers’ forward Brannon McManus scored the game-winner in overtime on the power play Friday night when Pitlick sent him a feed to the front of the net and McManus redirected it in past the goaltender on the far glove side.

The Gophers have won seven of their last eight games.

“That was a big sweep for us, and [a] good first round of the playoffs … we really need that,” Pitlick said. “[We] want to take what we’ve been doing and keep doing it, and be consistent.”