Rachel Zilinskas, who was a seven-time All-American Swimmer at the University of Georgia, is just getting started as a triathlete. 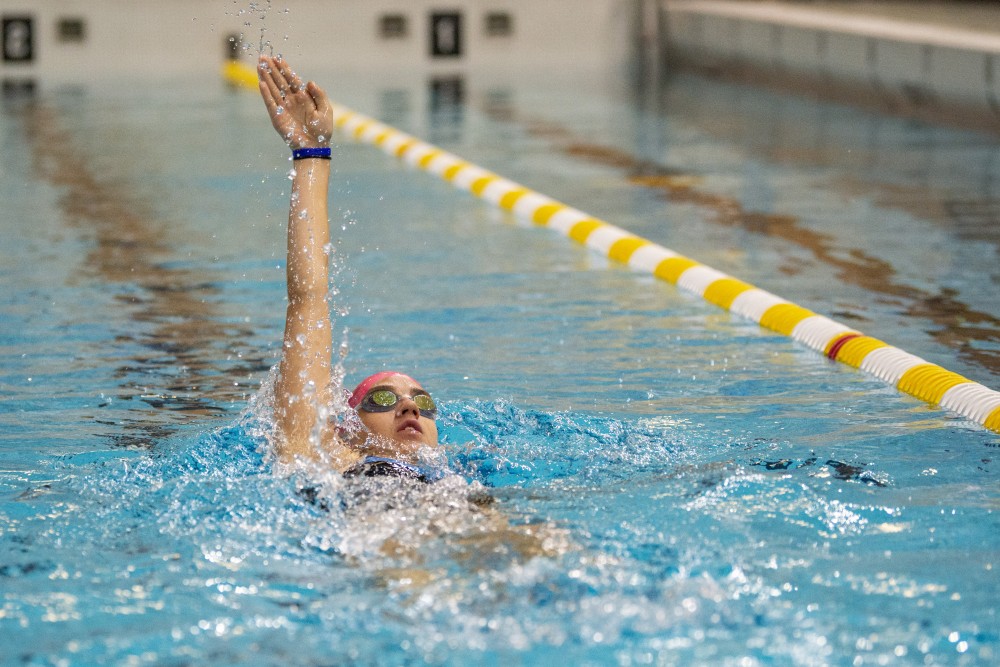 Rachel Zilinskas trains in the pool at Cooke Hall on Friday, July 26 after her early morning spin class.

At the University of Georgia, Rachel Zilinskas was a seven-time All-American long distance swimmer who competed in the 2012 and 2016 Olympic trials. After tearing her rotator cuff her sophomore year, she knew that swimming would not last forever.

“At the end of my college career, I was just kind of tapped out in terms of what my shoulders could handle,” Zilinskas said.

Being a fierce competitor her whole life, the now-University of Minnesota graduate student gravitated toward a sport that she had been watching since an early age.

“My mom has done triathlons for a really long time,” Zilinskas said. “I knew it was something I was interested in getting into.”

When she first started training for a triathlon, it was more of a bucket list item that she wanted to check off. That was until she competed in her first race.

“I did my first real competitive triathlon and I did really, really well,” Zilinskas said. “Then I just kind of never looked back from there.”

On July 13, she competed at the CHERRiSH Life Time Tri Minneapolis Triathlon at Lake Nokomis. It consisted of a .93 mile swim, 24.5 mile bike ride and a 6.2 mile run. Despite not winning, she took second place in the International Distance Women’s division. It was one of the best finishes of her career.

“It was a pretty elite race,” Zilinskas said. “I was pretty proud of the second place because it was a pretty competitive field.”

The Indiana, Pennsylvania native trains seven days a week. On weekdays she trains for one to three hours a day and on weekends she trains two to five hours per day. She only takes a rest day once every three weeks. She receives guidance from her coach Andrew Yoder, who is a professional triathlete. Yoder is based out of Pennsylvania; he trains Zilinskas remotely, giving her one to two weeks worth of workouts to continue to help her grow in the sport. Even though she has an intense training regimen that takes up a lot of time, she doesn’t mind.

“I don’t have much free time and that’s one of the things that make triathlons so great,” Zilinskas said. “It’s great for me to have this outlet that’s both really good for me physically and mentally.”

Currently, Zilinskas is training to compete in the Ironman Wisconsin Triathlon, which takes place in Madison on Sept. 8. The race is much longer than Lake Nokomis event, triathletes must complete a 2.4 mile swim, 112 mile bike ride and run a marathon.

“It’s a lot of sharpening your mind,” Zilinskas said about the longer race. “When I’m training, I’m thinking about a lot of different things. I get lost in being outside and really enjoying that, it’s kind of very freeing.”

Being a triathlete in Minnesota has its challenges, but the University is where she wanted to be to get her Ph.D in biostatistics, according to Zilinskas.

“It was very important to me that I was at a place where I felt comfortable. Obviously not super comfortable during -30 degree temperatures,” Zilinskas said with a laugh. “It definitely can be a bit of a disadvantage not having outdoors year round.”

The winter weather makes it tough for her to continue to improve her competitive biking skills, which she just began training for last year. Despite only biking for a year, it’s not her weakest event. That would be running, she said.

Being a swimmer her whole life, her body isn’t used to the constant impact of running long distances, she said. She constantly deals with runner’s knee and even a hip injury, but she is working to perfect her running form and undergoes physical therapy.

She may not have achieved her goal of making the Olympics in swimming, but that’s not stopping Zilinskas from having lofty goals for her triathlon career.

“I would love to qualify for the Iron Man World Championships in Kailua-Kona, Hawaii,” Zilinskas said. “That’s kind of been a goal of mine ever since I found out what they were when I was younger and watched them on TV.”