A brief survey course for any 18+ dandy looking for the right place to let down and/or whip his hair. 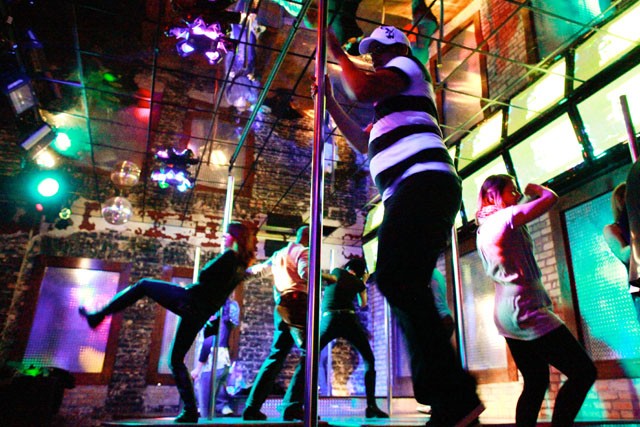 90's regular Robert Jorge pole dances on the stage Saturday night at Gay 90's. Gay 90's is one of the Premier Bars in Downtown Minneapolis

Since the dawn of the dance remix, Minneapolis has managed to sustain a gay bar culture as vibrant and multifaceted as the people who frequent them. While a diverse crowd may populate each venue, it is the character of the special events and programming that distinguishes each bar as what could be a house of twink or muscle-daddy domain.

Despite being two decades past its titular signature, the Gay 90âÄôs has remained a stronghold of the downtown gay bar scene since opening in the âÄô50s, branding itself as âÄúthe premier bar for everyone.âÄù

Laying claim as the only bar with a drag show lounge, the 90âÄôs drag queendom is reasserted through its shows every Tuesday through Sunday and the ever-popular âÄúLa FemmeâÄù show on weekends. It was also the runway where the career of Bebe, first season winner of âÄúRuPaulâÄôs Drag Race,âÄù first took off.

Additional signature 90âÄôs events include a foam party on the third Friday of every month and 18+ nights Wednesdays, Sundays and the third weekend of each month.

If all the gay bars were a group of friends, Jetset would be the one who never needs their hair held back after a long night out.

âÄúThe crowd here is pretty hip, young and attractive,âÄù seven- year bartender Alex Waltenberg said. With a nod from the City Pages as the âÄúBest Gay BarâÄù two years in a row, Jetset has earned a reputation with its creative drinks and refined atmosphere. JetsetâÄôs low-key style attracts a diverse crowd.

Hosting 18+ nights every Friday, Jetset is open to club kids who can still plan on getting loose. As Waltenberg intimated, âÄúitâÄôs upscale, but not too serious.âÄù

The Saloon is a multi-chambered, low-lit hotspot that is well known for its shower platform, an elevated bathing enclosure for dancers in the buff to show their stuff. On Sundays, the on-stage shower is opened to any 18+ amateur to romance onlookers with a seductive bathing routine and compete for a $200 grand prize. The SaloonâÄôs bi-weekly 18+ nights in tandem with a cheap cover helps bolster its status as the gateway bar for the younger crowd.

Billing itself as âÄúThe premier masculine menâÄôs bar,âÄù the Eagle and its subsidiary club, the Bolt Underground, host such events as an Underwear Night  âÄî with complimentary clothes check âÄî and Leather Night, where the dress code is also suitably enforced.

Though the scene at both clubs is casual most nights, Bolt Underground has the distinction of hosting a monthly Bear gathering the last Saturday of every month. Cubs and other members of the under-21 crowd can break into the field with the Bolt UndergroundâÄôs 18+ nights each Thursday.

Whether going out should be a drag, feature a shower thatâÄôll leave one a little dirtier than presumed, or someone may simply be into leather, any day of the week is a fine one to come out âÄî though ideally it would be on the weekend. With a twink and a smile, all otter go and bear it all at any of one of MinneapolisâÄô finest gay bars.