A culmination of progress for defense 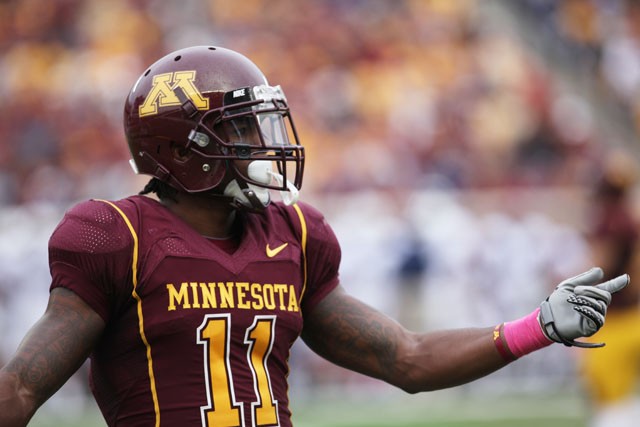 Troy StoudermireâÄôs performance Saturday perfectly represented the Minnesota defenseâÄôs body of work this season: Start poorly, finish strong and end on the highest note. Iowa successfully attacked the junior cornerback through the first three-plus quarters, much like MinnesotaâÄôs opponents did in scoring 35.7 points per game during a nine-game losing streak. Stoudermire missed a few open-field tackles, something thatâÄôs happened all season as opposing teams ran for better than 200 yards per game before Saturday. He also failed to cover wide receivers Derrell Johnson-Koulianos and Marvin McNutt on their touchdown catches, continuing the Minnesota secondaryâÄôs season-long tradition of being picked apart. But after all the problems Stoudermire had Saturday, the player who started the season as a wide receiver made the play that ensured the Hawkeyes wouldnâÄôt have a chance to march down the field to score a touchdown that wouldâÄôve dropped the Gophers to 2-10 and 0-12 in trophy games since 2006. âÄúWe just went to the defense and told them that we needed them to get us a turnover,âÄù sophomore MarQueis Gray said. âÄúI think it was Troy who got that hit. He made a big play for us, and I think that was what got us to win the game.âÄù After the Gophers took a 27-24 lead with 4:31 left in the game, Hawkeyes running back Marcus Coker took a hand-off up the middle on their first play of the drive. He saw little room, so he cut to his right where he made a 12-yard gain. But Stoudermire wouldnâÄôt let Coker, a freshman who had no fumbles this season, go any farther. In a parallel fashion to his interception that clinched the Gophers upset over Illinois two weeks before, StoudermireâÄôs hit forced the ball from CokerâÄôs hands, and safety Ryan Collado recovered it. âÄúI just saw him jump on it and I started celebrating because I knew he had it,âÄù Stoudermire said. And just like that, Stoudermire and the rest of the Gophers defense proved in the final minutes of the last two games that they could come up with timely stops that seemed impossible three weeks ago. âÄúWeâÄôve been battling every week since the season started,âÄù Collado said. âÄúWeâÄôve been working hard. I guess now it just started clicking, and we just started executing.âÄù Nobody could put a finger on why the defense and the rest of the team struggled so mightily before the final two games. With Floyd of Rosedale in their trophy case for at least a year, the Gophers barely care. And like the rest of the defense, the intensity that resulted in StoudermireâÄôs forced fumble might not have been there without the early struggles. StoudermireâÄôs early setbacks helped drive him to make up for what he had cost the team. âÄúIn this game youâÄôve got to have a bad memory,âÄù he said. âÄúYou canâÄôt dwell on one play because youâÄôll be down the whole game. YouâÄôve just got to let that go and go out and play the next play.âÄù Following a one-game suspension (Northern Illinois on Sept. 25) for saying he was leaving because since-fired coach Tim Brewster wanted him to switch from wide receiver to cornerback, Stoudermire apologized to his teammates and said he would play wherever the coaches wanted him. On Saturday, StoudermireâÄôs special teams work was that of a man possessed. He returned kickoffs and punts that either shouldâÄôve been let go or fair caught. On a punt return for no gain in the fourth quarter, Stoudermire bending down to catch the ball was the only thing that stopped a defender from putting a concussion-worthy hit on him. âÄúI was trying to do whatever I could to give us the field position to go score and put us in the right position to go score,âÄù he said. After that return, the Gophers marched down the field and scored the go-ahead touchdown. It seemed only fitting that a guy who had one of the most emotionally wrought seasons on the team later clinched the win. âÄúAfter I came back and got on defense,âÄù Stoudermire said, âÄúI told them you will see no more negativity from me. You will see me up, happy, cheering my teammates on, doing whatever I can to help this team win.âÄù