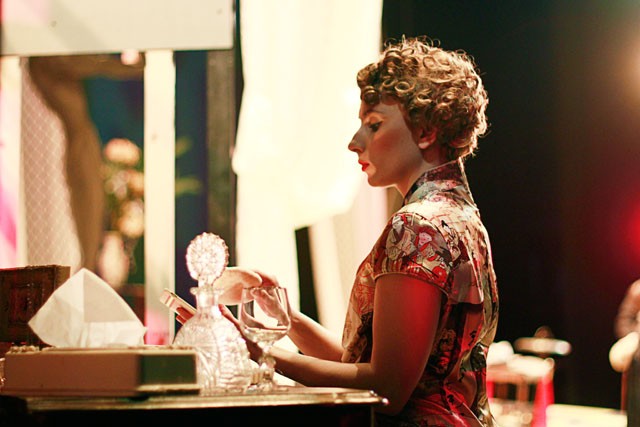 David Walsh, director of University Opera Theater, reflected on what led him to make the 150-year leap to another era and still preserve the panache and social critique in the original.

âÄúI wanted to find some analogous situation to what existed at that time,âÄù Walsh said. âÄúThese huge egos and self-absorption and narcissism and cheating âÄî left, right and center âÄî on partners, that goes on âÄ¦ Hollywood seemed to offer itself as a very obvious American comparison.âÄù

Walsh personally translated the operetta from its original German when he found that the 1950s English translation was dated and lacked the wit of the original. âÄúThe Viennese would have understood the implications of the satire in the original that would not be necessarily so apparent to an American audience âÄ¦ if you don’t get that, then part of the piece is lost,âÄù Walsh said.

Golden Age Hollywood serves as the obvious location of Walsh’s translation because he considers it to be a âÄúglamorous era,âÄù full of a pageantry and old-world regality that is ripe for both grand theatrical sequences and searing critique.

Artistic Director of Orchestral Studies and University Symphony Orchestra Director Mark Russell Smith said âÄúDie FledermausâÄù is tied to the show-business world in not only its complicated relationships but its musical composition as well.

In addition to memorizing their vocal parts up to eight months in advance of the show’s production, students also researched classic cinema to gain familiarity with the modern counterparts of their roles in âÄúFledermaus.âÄù

The physical movements of leading lady Rosalinde (played by graduate student Brianna Farah) were inspired by Grace Kelly’s inexhaustible class and effortless extravagance in performance. A princess in the original looks a little more like Marilyn Monroe in this production, and the characterizations of leading man Eisenstein (played by graduate student Phong Nguyen) were drawn somewhat from the more modern but nonetheless iconic Rodney Dangerfield.

For all the depth of their research and practice, students were ultimately directed to keep it light.

âÄúThese are superficial characters. The fun is in the situations they get in, the fools they make of themselves,âÄù Walsh said. âÄúIt’s meant to have that light, frothy fun, but with a little bit of sting in the tail of the wit.âÄù

The lightness of the content is reflected in the music, which Smith and his students went to great lengths to perfect.

âÄúIt’s light music, but it’s really demanding. Musically, you have to be a really good musician. You have to have great technique. You have to be really aware âÄ¦ It requires a particular and unique style,âÄù Smith said.

âÄúDie FledermausâÄù itself is a humorous, high-energy operetta that contradicts the common presupposition of a theatrical form that is dour, dramatic and ain’t over ’til the fat lady sings for 20 minutes straight.

What might at first be difficult for the audience to grasp can be quickly remedied by Walsh’s advice to his performers in practice when they struggled to maintain the levity he was looking for.

âÄúIt’s like when you sautÃ© something,âÄù he said. âÄúIt has to be done very quickly, at high heat, and that’s it. If you do it longer, it doesn’t hold.âÄù