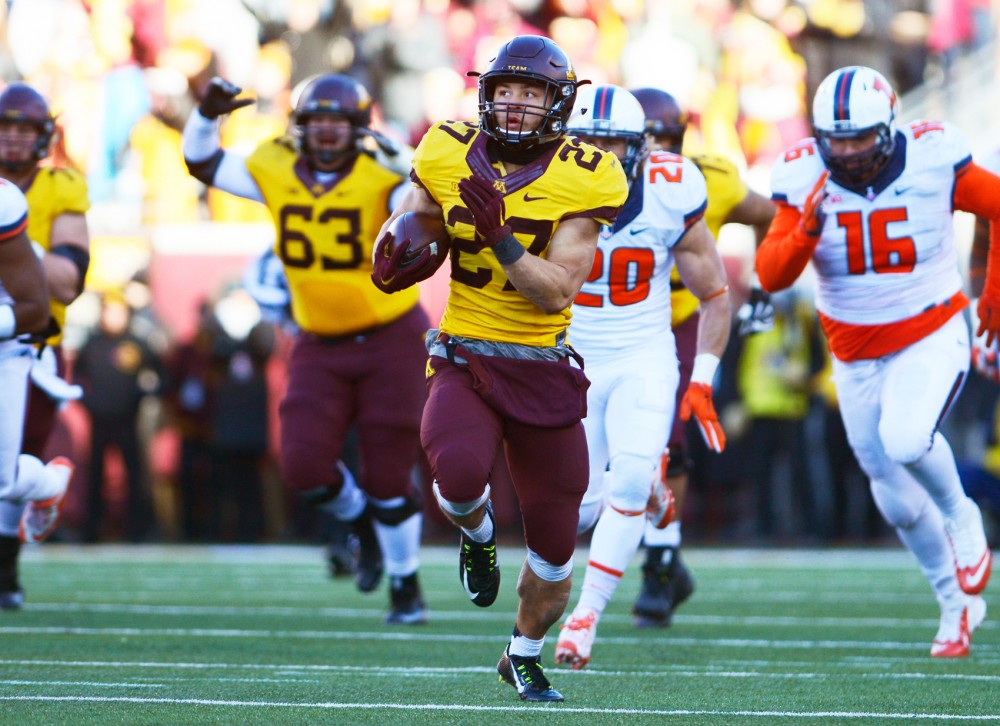 Gophers running back Shannon Brooks runs for a 75-yard touchdown late in the fourth quarter on Saturday at TCF Bank Stadium where Minnesota defeated Illinois 32-23. The touchdown, followed by a 2-point conversion took the gophers up 8 points, giving them a more comfortable lead.

The Gophers schedule is a bit different this year.

The team is coming off an early bye week after just two games and still has one more non-conference game before they start Big Ten play.

But that hasn’t changed the way head coach Tracy Claeys has prepared the team for the rest of the season.

“We usually try to get guys back healthy and rest. Even though it’s in the second week, the bye week has taken on such a recruiting emphasis of getting out and recruiting,” Claeys said. “We carried the same routine, and hopefully we get a couple guys back from being banged up, and kids will have their legs under them and be ready to go.”

The bye week was especially beneficial for one of Minnesota’s key players.

Sophomore running back Shannon Brooks, the team’s leading rusher from last season, has missed the first two games of the season with a foot injury.

Claeys said he has been cleared to play for the game against Colorado State on Saturday but said his participation in the game will depend on how he is in practice.

“He really hasn’t practiced,” Claeys said. “If he gets through practice okay and he’s not sore and all that, then [he will play] but if he’s sore we won’t take a chance on him this week.”

In the absence of Brooks, redshirt sophomore Rodney Smith and junior Kobe McCrary have filled the void well for Minnesota in the run game. Smith earned his career high for rushing yards in a game in the opener against Oregon State. McCrary led the team in rushing in the second game and added two touchdowns in the blowout win against Indiana State.

Once Brooks comes back, all three running backs will be competing to play a big role in the Gophers offense.

“It’s a lot of deadly weapons in the backfield,” redshirt senior quarterback Mitch Leidner said. “Another very explosive player to have [Brooks] back. It will be fun to see him go out there and rumble around a little bit.”

The game against Colorado State will be Minnesota’s third and final non-conference game of the season.

All three of the games were at home and the Gophers will have their first road game when they face Penn State on Oct. 1.

The Gophers now have 10 games in a row without any break and will play a football game on every Saturday until December.

“I think now, having these 10 games, we can roll through and keep our confidence up,” senior wide receiver Drew Wolitarsky said. “No more freak pauses during the season. That’s good.”

Claeys said that’s one Minnesota got away with.

Leidner said he didn’t mind the timing of the early bye week, and that it was able to give the Gophers more time to make sure another game like last year against the Rams doesn’t happen again.

“Especially after how close it was last year, so we’ve got to be ready to go,” Leidner said. “I thought we’ve done a good job through the bye week and Sunday’s practice to be able to prepare for these guys and we’ve just got to continue with that.”

-Defensive backs KiAnte Hardin, Ray Buford, Dior Johnson and defensive lineman Tamarion Johnson, the four players who were suspended before the Indiana State game, are still suspended, Claeys said. The four of them are somehow involved in a case being investigated by the Minneapolis Police Department.

-Linebacker Nick Rallis is listed as out for the Colorado State game. The redshirt senior injured his left arm in the second quarter of the Oregon State game.