Michigan State is 7-1 since losing to the Gophers on New Year’s Eve. Minnesota is 4-4. 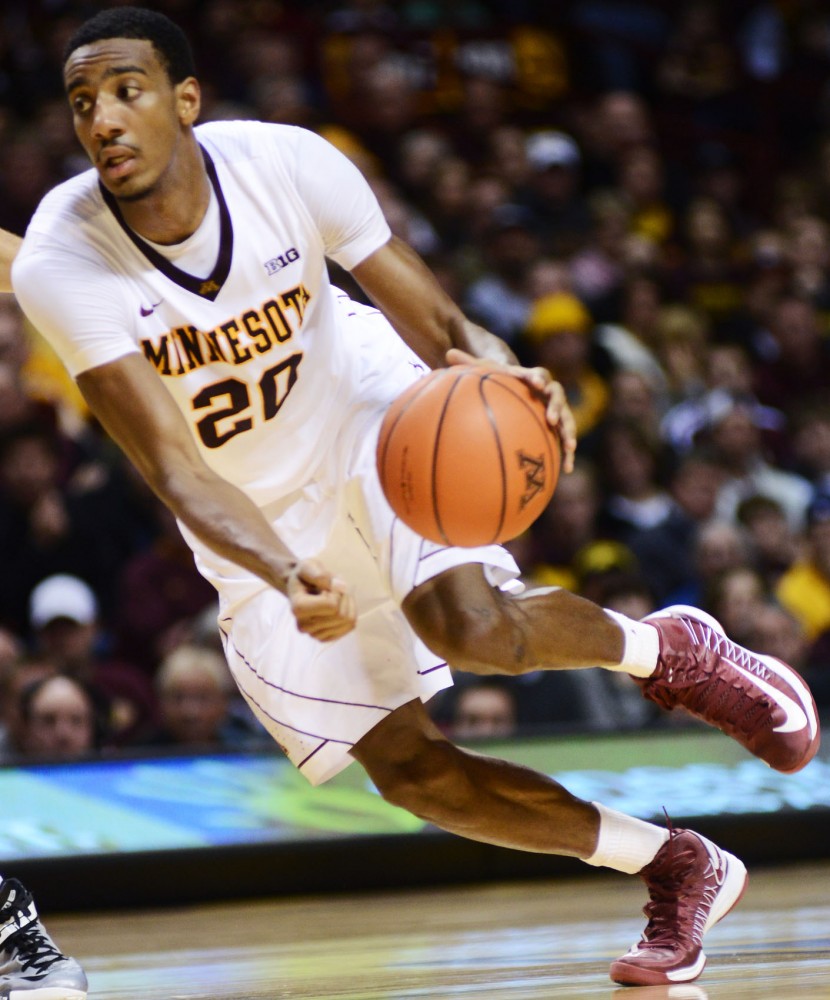 Minnesota guard Austin Hollins drives to the basket against Iowa on Sunday, Feb. 3, 2013, at Williams arena.

These aren’t the same Spartans the Gophers pushed around on New Year’s Eve.

No. 18 Minnesota travels to face No. 12 Michigan State on Wednesday in a rematch of the Big Ten Conference opener, which the Gophers won 76-63 on Dec. 31.

“We beat them once, but that doesn’t mean anything,” junior guard Austin Hollins said.

The Gophers are fresh off back-to-back wins after a four-game skid.

Coach Tom Izzo’s Spartans have won seven of eight games since losing to Minnesota, including victories over then-No. 11 Ohio State and a road win at Wisconsin.

“Michigan State is a better team, but we are too,” Hollins said.

Coach Tubby Smith’s squad has a 4-4 record since its offensive outburst against the Spartans, during which the Gophers shot a Big Ten-season best 57 percent from the field.

But this time around, Michigan State won’t be playing a four-guard system like it did Dec. 31. Spartans center Adreian Payne has been inserted into the starting lineup, and Derrick Nix, who struggled against the Gophers’ frontcourt, has moved into the power forward role.

Minnesota’s bench has continued to struggle since the win over Michigan State when it scored eight points.

The Gophers’ reserves are averaging 10.2 points in Big Ten play. They didn’t score at all and had no field goal attempts in Sunday’s win over Iowa.

“They all want to shoot it,” Smith said, “but they must’ve not had an open look.”

Sophomore center Elliott Eliason had an impressive game against the Hawkeyes, and Smith said he will still come off the bench Wednesday.

“[Eliason’s] got to get his offensive rebounds, make his free throws, draw fouls — that’s how he can be an effective scorer,” Smith said.

Mbakwe and Eliason will face off against Payne, who provides Michigan State with the athleticism it may need to keep up with the Gophers’ fast-paced style of play.

Payne has shot 63 percent from the field in the eight games since he last faced Minnesota, averaging 11.1 points and 5.9 rebounds.

The Spartans enter the matchup with a few bumps and bruises, but they’re fortunate to have five full days off since their last game.

Big Ten Freshman of the Year candidate Gary Harris is questionable after Michigan State’s win over Illinois on Thursday. The freshman suffered back spasms during the game and has been limited at practice.

Sophomore guard Travis Trice, who shot 3-for-4 from deep against Minnesota, is also questionable with a possible concussion he suffered against Illinois.