Universities across the country engage in soil-judging competitions. 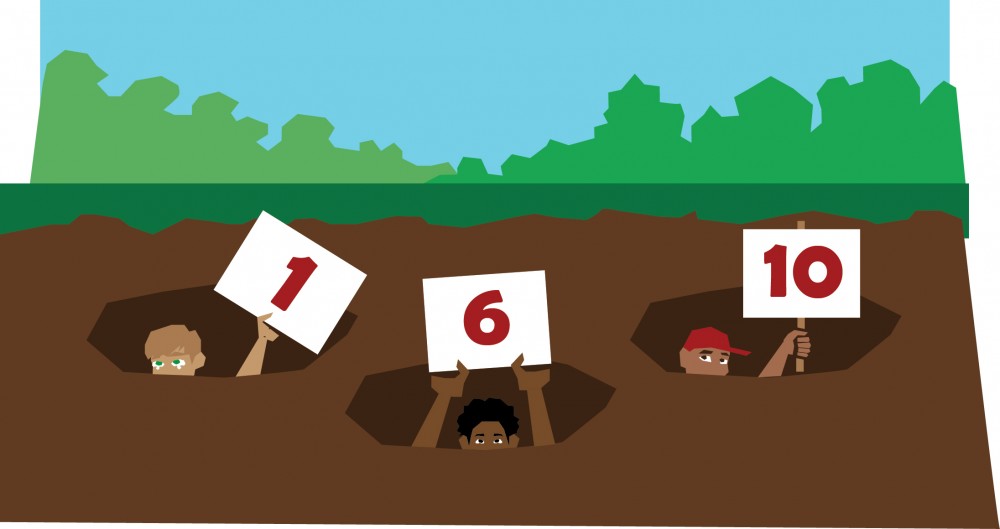 On the St. Paul campus, a group of students often climbs into pits in the dirt, taking samples, doing tests and recording measurements on the soil that they find. While this may look strange to observers, it is routine for the University of Minnesota’s Soil Judging Team.

The Soil Judging Team has been competing against other universities since 1958. Last month, the team placed first in the group category and fifth overall at a regional competition in Kansas.

Eight students represented the University at the competition, which featured schools from around the Midwest. The students spent months preparing for the week-long competition.

“[Soil] should be important to everyone who eats food, wears clothes, or utilizes transportation and buildings,” said Harley Braun, a University agriculture education major and soil team member. In the Kansan heat, competitors examined the horizontal layers of the soil, took samples and made inferences based on its characteristics. Judges at the competition graded soil beforehand and assessed students’ work on how closely it matched up with the official results. Part of the competition was determining if the soil could sustain certain developments like roads or houses.

“Students say they learn more in a week of soil judging than they do in a whole semester of class,” said Nic Jelinski, the University Soil Judging Team’s coach and an assistant professor in the College of Food, Agriculture and Natural Resource Sciences.

There are currently 40 universities in the nation with competitive soil judging teams, according to John Galbraith, a competition judge and associate professor in the School of Plant and Environmental Sciences at Virginia Tech.

Jelinski said other teams have an advantage because they can practice outside longer due to milder winter weather. When the weather is too brutal in Minnesota, the University’s team has group discussions and reviews scorecards and other paperwork.

Even with this disadvantage, the team has been successful.

“This is one of the best teams I’ve ever had,” Jelinski said.

The University team will not be advancing to the national competition this year, but they are currently preparing for another competition in the spring.

To be on the soil judging team, most students need to have taken Jelinski’s Basic Soil Science and Field Study of Soils classes. Most team members are upperclassmen, but younger students are starting to join as well. Jelinski said this shift in demographics will help the team retain members and bring in a “new era” for the group.

“We normally have a ton of turnover. This is the first time we’re going to have a big group stay together,” Jelinski said.

Devon Brodie, a student in CFANS and member of the team, is confident about the team’s future.

“We will be national champions within the next four years. You heard it here first,” Brodie said.