The ancient scrolls will be exhibited at the Science Museum of Minnesota. 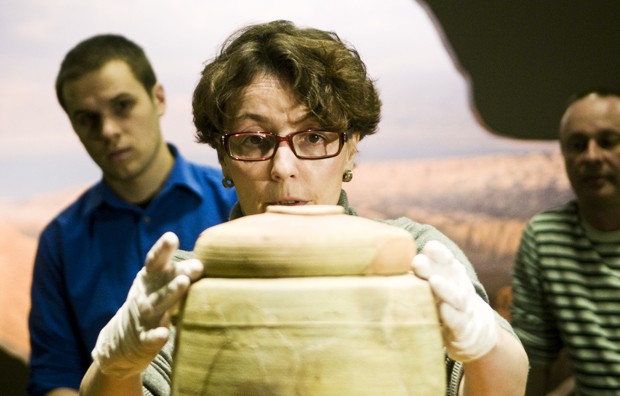 Helena Sokolov centers the lid on the jar Thursday at the Science Museum of Minnesota.

Tweezers and scissors sat within reach of latex glove-clad hands. Rubber suction handles sat attached to a Plexiglass case. When dealing with ancient artifacts like the Dead Sea Scrolls, a single slip of the hand could destroy 2,000 years of history. For the first time, some of these revered documents will be open for Minnesotans to view at the Science Museum of Minnesota in St. Paul. Drawing on a University of Minnesota professor for help, the exhibit will open this Friday. Widely considered the most significant archaeological find of the 20th century, the Dead Sea Scrolls are a collection of 931 manuscripts found in caves near Qumran, an ancient settlement on the coast of the Dead Sea. The 2,000-year-old texts are the oldest known version of the Hebrew Bible and predate the second-oldest copy by more than 1,000 years. According to local legend, a Bedouin shepherd boy discovered the scrolls in 1947 while looking for a stray goat. The boy stumbled into a cave to find the first seven scrolls, protected from decay in jars. The rest of the scrolls were found over the next decade in 10 other surrounding caves. Found mostly in fragments, the piecing together of these manuscripts was not completed until the mid-1990s. The scrollâÄôs owners, the Israel Antiquities Authority, began planning for the St. Paul exhibit seven years ago, Joe Imholte, director of special exhibits at SMM, said. He said the planning process felt like an interview to make sure the IAA could trust the museum with such precious artifacts. âÄúItâÄôs a testament to our reputation as an institution that we are able to host exhibits like these,âÄù Imholte said of the exhibit. âÄúTo be able to bring them to the museum to share with visitors is an opportunity that we couldnâÄôt miss.âÄù The first set of scrolls changed hands from couriers to the museum March 1 after the overseas flight. The scrolls spent the next week acclimating to the new climate in a museum vault. As a precaution against weathering, each set of scrolls can be displayed for just 10 weeks. By the end of October, three sets of five scrolls will have been on display. This is the first time three sets of scrolls have been part of an exhibit in the United States, SMM Vice President Mike Day said. Imholte said the largest task has been to replicate the cave environment that kept the scrolls so well preserved. The case for each scroll has its own climate control system that keeps the temperature about 68 degrees and the humidity at 50 percent. Ensuring that the scrolls are lit sufficiently is another battle. Imholte said light is one of the most damaging elements to them. And although the scrolls are the focal point of the exhibit, they are surrounded by a wide array of archaeological material from the region, which Imholte said will set it apart from all other Dead Sea Scroll exhibits. âÄúThere will never be another one like it, and there has never been one like it before,âÄù he said. âÄúThis exhibit is really one-of-a-kind from the point of view of new material and new way of presenting it,âÄù said Dr. Hava Katz, IAA chief curator of national treasures. Katz has spent the last 16 years overseeing all Dead Sea Scroll exhibits in her home country of Israel and around the world. As chief curator, she is responsible for more than a million artifacts, the most important of which are the scrolls. She and a team of other curators and conservators arrived in St. Paul last week to help with the installation, and she said her work with the museum has been âÄúmarvelous.âÄù From sandals to coins to pottery, the other materials and images in the exhibit help tell visitors a story about what life was like during the first and second centuries. University professor Alex Jassen has been instrumental in putting that story together. Jassen, who is teaching a class on the Dead Sea Scrolls this semester, has acted as a science adviser to the museum for the past year. He said his main task was arranging the artifacts to complement the scrolls. âÄúThe scrolls really speak for themselves,âÄù he said. He also represents one side of the many arguments surrounding the origin of the scrolls, which remains a mystery. Some scholars, Jassen among them, believe the scrolls were written by one unified community of Jews who secluded themselves from the rest of society. Others, like JassenâÄôs fellow science adviser Dr. Michael Wise, think the scrolls are a collection of the most important documents that were hidden before Jerusalem was ransacked by the Romans at the end of the first century. Imholte said both science advisers showed the exhibit staff that the debate surrounding the scrolls can be respectful and healthy. University junior Jeremy Edwards intends to visit the exhibit during its seven-month tenure, despite having seen the scrolls three times while in Jerusalem. âÄúItâÄôs a very special thing to be able to see something from your communityâÄôs history,âÄù he said. Edwards is a member of Hillel, the campus group for Jewish students. Hillel is not currently planning a group trip to the exhibit, but he encouraged all members to go if they can. Jassen pointed out that many of the scrolls on display at this exhibit have never been in public before. âÄúYouâÄôll hear the museum publications talk about a once-in-a-lifetime opportunity,âÄù he said. âÄúIt really is.âÄù