The Gophers are ranked No. 2 in the country, just behind reigning national champion Oklahoma. 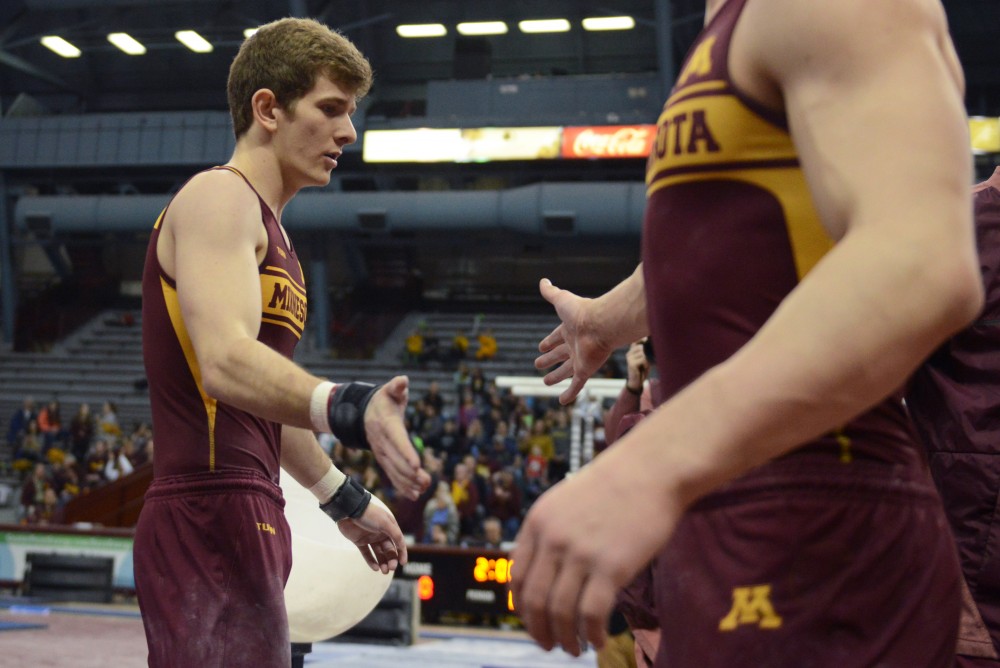 Luke Aldrich high-fives a teammate after competing on the pommel horse on Sunday, March 18.

No. 2 Minnesota has been waiting for the Big Ten Championships for months. As anticipation builds, the Gophers hope to win the Big Ten title for the 22nd time in program history.

Knowing what the team is ranked, senior Luke Aldrich said the team expects the title.

“We’re coming in ranked first [in the Big Ten]. We plan to finish first,” Aldrich said. “This is the first time in the four years that I’ve been here that we’ve been ranked first. That’s motivated us to tap into our potential. We know we’re the best. The rankings show that.”

Last season, Minnesota won three of its seven meets against Big Ten opponents. Junior Justin Karstadt said it was important for the Gophers to improve their record against conference rivals this season.

“We wanted to win the regular season as a statement to the rest of the Big Ten going into the Championships. We’ve beaten a lot of major contenders for the Big Ten title this year,” Karstadt said. “In previous years, we’ve always had a lot of potential on the team and then let regular-season meets slip away against Big Ten opponents.”

This season, Minnesota won four of its six regular-season meets against Big Ten rivals. The Gophers won both of their home meets against conference opponents with victories over No. 9 Iowa on Jan. 27 and No. 8 Illinois on Feb. 10.

Head coach Mike Burns said this will be the most competitive Big Ten Championships he has been part of in his 14 seasons of coaching at Minnesota.

“Every team in the Big Ten this year is going to have an opportunity to win it,” Burns said. “It’s going to be critical that we bring our ‘A’ game to this thing and do what we’re capable of doing. It’s going to come down to the last guy on the last event.”

At the 2017 Big Ten Championships in Champaign, Illinois, the Gophers won bronze in the team competition with a score of 413.300. In the individual competition, senior Alex Wittenberg won the Big Ten title on floor and earned a score of 14.550. Senior Yaroslav Pochinka won bronze on vault with a 14.750.

Minnesota hasn’t won a Big Ten title in 23 years. Karstadt said the rest of the team owes it to the seniors to win the Big Ten title.

“They’ve done so much for our program,” Karstadt said. “They’ve changed the whole program and have been great leaders for us. It’s time to pay them back.”

The Big Ten Championships begin at 6 p.m. Friday in Ann Arbor, Michigan. The individual portion of the Championships will be held Saturday, also at 6 p.m.

Aldrich said a Big Ten title would be significant for him.

“These past two years, I’ve been working hard in the gym making my sets and making lineup. If we win, it will be a team effort,” Aldrich said. “Coming in with nine other people, we’ve wanted this goal for four years.”