U aims to reduce energy use by 5 percent

The 'It All Adds Up' campaign will rely on students, staff and faculty. 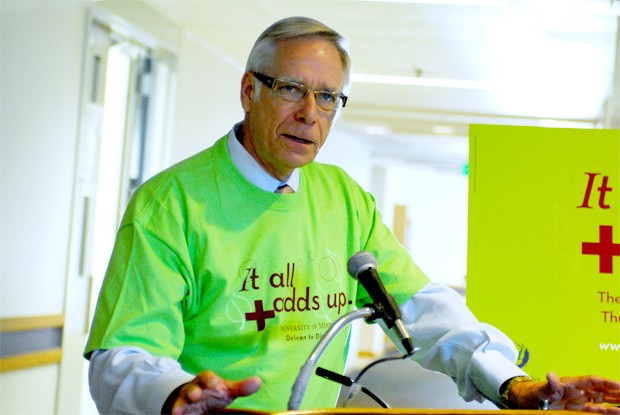 The University of Minnesota will be a greener and more energy efficient campus in 2011 if students and staff buy into a program announced Thursday by University officials aimed at reducing campus energy consumption. The âÄúIt All Adds UpâÄù campaign asks students, faculty and staff to pledge to reduce their individual energy consumption by doing simple things like turning off computers when they arenâÄôt in use or taking the stairs instead of the elevator in hopes of reducing the UniversityâÄôs total energy consumption by 5 percent by the end of 2010. The campaign was kicked off with speeches by University President Bob Bruininks and Vice President for University Services Kathleen OâÄôBrien , and served as the main focus of ThursdayâÄôs Beautiful U Day celebration, an annual event run by Facilities Management aimed at cleaning up campus and promoting sustainability. Other Beautiful U Day festivities Thursday included park cleanups and an energy forum where student groups and representatives from the UniversityâÄôs energy management division met to discuss different energy concerns on campus. During his speech, Bruininks encouraged people to âÄúmake conservation an everyday priority,âÄù and said he hopes the University is able to make the 5 percent energy reduction an annual goal. Although one person taking the stairs wonâÄôt make much of an impact on the campusâÄô energy consumption, University Services spokesman Tim Busse said if the whole campus gets involved making âÄúlittle changes,âÄù the reduction goal is attainable. âÄúWe acknowledge, âÄòYea âÄ¦ it may not make a difference if you switch the lights off when you leave the room,âÄôâÄù he said. âÄúThe truth is we have 80,000 people here on campus everyday and if everybody does it, it all adds up.âÄù So far, people filled out more than 900 pledges, but making sure they take action will be a challenge, Busse said. To keep people engaged, OâÄôBrien mentioned possible University events throughout 2009 that could tie back to and build on Beautiful U Day and the energy conservation campaign. However, biomedical engineering senior Matt Hein said it will be tough to make people stick to their pledges. âÄúI doubt the pledges are going to do anything,âÄù he said, noting serious conservationists are already doing things like turning off the lights when they leave the room. In addition to the environmental benefits, Busse said the campaign will save the University money during its budget shortfall. If the University is successful in meeting its energy reduction goal, it will save $2.25 in annual energy costs and will emit 25,000 metric tons of carbon dioxide less than it currently does, he said. In addition to the savings from individual pledges, Busse said much of the energy savings will come from tuning of campus buildingsâÄô heating and lighting, âÄúrecommissioned âÄù to run more efficiently. During a building recommission, energy management staff works to analyze how energy is used in the building and then to install more efficient lighting and plumbing fixtures and tweak heating and cooling systems to improve the buildings overall energy consumption, Jim Green, assistant director for energy management, said. âÄúOur initial efforts are to really tune the building up so that itâÄôs running the way it was originally designed, because over time things get out of adjustment, things wear out,âÄù he said. Buildings are usually recommissioned every five years, Green said. The process takes about four months to complete and after a recommission, buildings use anywhere between 5 and 15 percent less energy, he said. Energy management staff gave Beautiful U Day attendees tours of the Electrical Engineering and Computer Science Building and outlined what gets worked on during a recommission, a process previously done out of the public eye. Green said by raising awareness about recommissions, he hopes staff who work in the buildings on a daily basis will feel comfortable contacting energy management about inefficiencies in the buildings. âÄúWe really want to bring this out into the daylight and let them know what weâÄôre doing and have them help us identify issues that we might otherwise miss,âÄù he said. Although results are still more than a year away, Bruininks expressed confidence that energy savings from individual conservation pledges and from tuning buildings will exceed the 5 percent goal. âÄúIf we really work together we can really move the dial, we can move the needle and blow right through the 5 percent goal we have,âÄù he said. âÄúI would be surprised if we fell short of it.âÄù