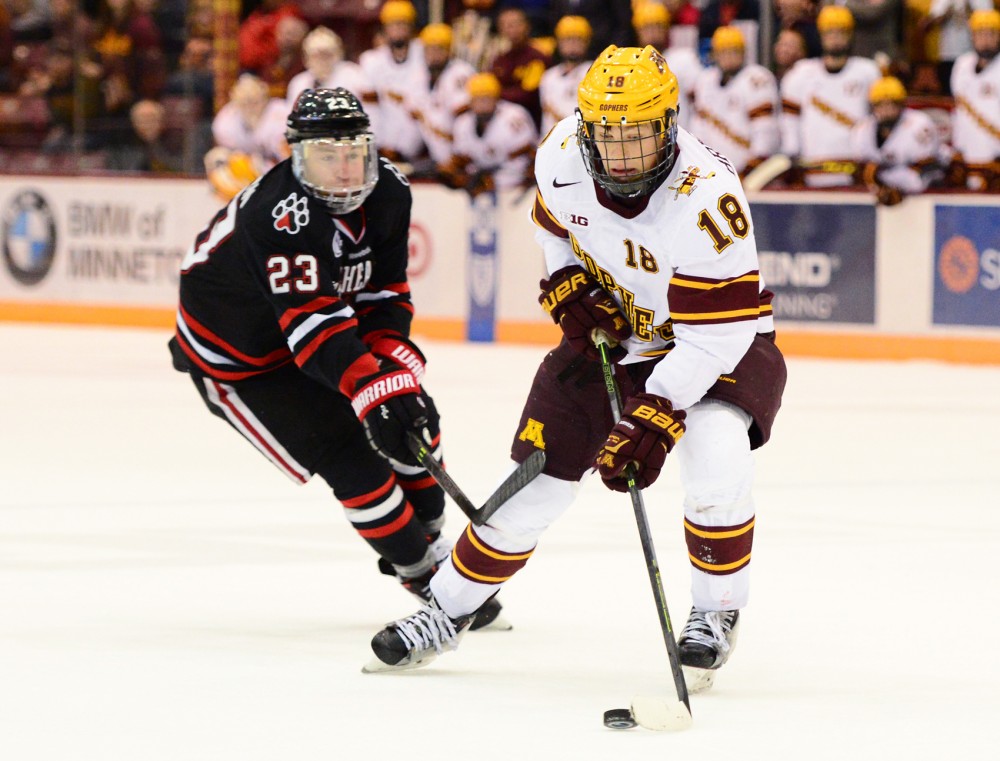 Forward Leon Bristedt handles the puck while playing against Northeastern in Mariucci Arena on Saturday, Oct. 24, 2015.

Mike Hendrickson
The Gophers lost a close game Friday night against No. 18 Notre Dame, but the team came back on Saturday evening with a victory.
The Gophers adjusted after dropping the first game 4-3, winning the second 4-1 to earn a series split on the road.
“To come on the road against a good quality opponent, get a split, that’s a good weekend for us,” head coach Don Lucia told reporters after Saturday’sgame. “Now we have to go back to work.”
The Gophers (3-4-0) were in a hole during Friday’s game, allowing three second-period goals to go behind 3-1 heading into the third.
Sophomore forward Leon Bristedt scored his second goal of the night on a power play in third period to bring the Gophers closer, and junior forward Hudson Fasching tied it up less than two minutes later on another power-play shot.
The game appeared to be heading to overtime, but with just under two minutes remaining, Irish sophomore Jordan Gross scored his second goal of the evening and Notre Dame won the game.
“I think we came back strong in the end,” Bristedt told reporters after Friday’s game. “I think we proved our power play can score goals.”
Bristedt had three goals over the weekend for Minnesota. His line, which also consists of Fasching and freshman center Tommy Novak, contributed to four goals on the weekend and has nine goals total, two more than the rest of the team combined.
“Right now, we’re getting offense from [Fasching and Bristedt],” Lucia told reporters after Friday’s game. “We got to have other guys join, especially the veterans that have been waiting for an opportunity to be put in some of these roles.”
The team’s veterans scored more on Saturday, as junior captain Justin Kloos got a goal for the first time this season in the third period.
Redshirt junior forward Connor Reilly also scored his first goal of the season on an empty net with one second left to make the score 4-1.
“It obviously feels good,” Kloos told reporters after Saturday’s game. “Nothing came easy here at the start of the year as far as pucks going into the net. [I was] able to get that
one. It was a relief.”
Junior defenseman Michael Brodzinski had his second goal of the season Saturday, and freshman forward Tyler Sheehy and junior defenseman Jake Bischoff each had two assists in the game.
Brodzinski told reporters on Saturday the game was one of the most complete the team had played this season.
“We were always in their zone,” Brodzinski said. “We competed for 60 minutes, and I think that’s what we got to do to on a road game.”
Freshman goaltender Eric Schierhorn had 62 saves on the weekend and allowed five goals.
Lucia told reporters after Saturday’s game that the victory is a building block for the rest of the season.
“It’s part of the process that we’re going through with this group,” Lucia told reporters. “They see the reward when you play like this.”
Delete Image
Align Left
Align Center
Align Right
Align Left
Align Center
Delete Heading