Students of color comprised only 14.5 percent of University of Minnesota students based on spring 2012 enrollment figures. 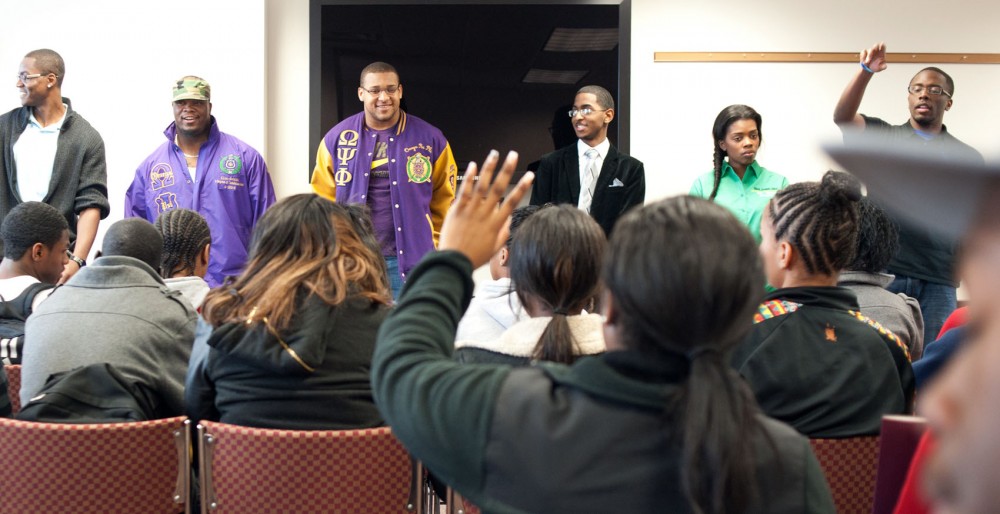 A panel of student athletes and greek leaders answers questions from metro-area high school students during an orientation organized by the Black Student Union on Thursday in Coffman Union.

High school minority students from the Twin Cities and surrounding area attended a workshop, panel and a mock class Thursday to experience what college life is like.

The students were on campus as part of the Black Student Union’s annual College Day — an day of activities to encourage students of color to pursue higher education that the group has held since 2008.

This year’s theme P.U.S.H — planning ahead, uplifting each other, staying sane and higher achievement — motivated prospective students to get involved on campus through networking and University resources.

“I expect them to see something they’re interested in, and then get more incentive to pursue a college career,” said Denetrick Powers, business and marketing junior and a Voices Merging volunteer.

Students of color — consisting of all non-international students who identify their primary ethnic background as African American, American Indian, Asian/Pacific, Hawaiian or Hispanic — comprised only 14.5 percent of spring 2012 enrollment according to the Office of Institutional Research.

This reflects the state as a whole, only about 14.5 percent of people identify as minorities according to 2010 U.S. Census data.

The program was started to help minority students feel comfortable on a predominately white campus by providing real life examples of minorities succeeding at the University.

The “Life after High School” panel allowed high school students to ask college students any questions they had about the college experience. Some students were involved in greek life, student organizations and campus outreach.

Mesgana Tesfahun, a freshman psychology major, said it helps for high school students to see students of color on a predominantly white campus.

At the start of the event, both the high school and college students brought a sense of cultural pride to the University.

Howard University graduate and public speaker, Daniel Shannon, continued with a spoken word titled “Vision Speaks Louder than Words.” He told the students to use their foreseen potential and take advantage of given opportunities.

“I feel comfortable now, at first I thought there weren’t that many minority groups, but actually hearing from people and all of the things that they get involved with made me want to go [to the University] even more now,” said Tameishey Brown, a Central High School junior.

The day ended with a presentation on taking the steps to apply for college by a Multicultural Center for Academic Excellence representative. The speaker focused on ways to fund education.

“I was planning on going [to college] but I didn’t know how to afford it until now,” Brown said.