The redshirt senior has not played a game for Minnesota since March 2017. 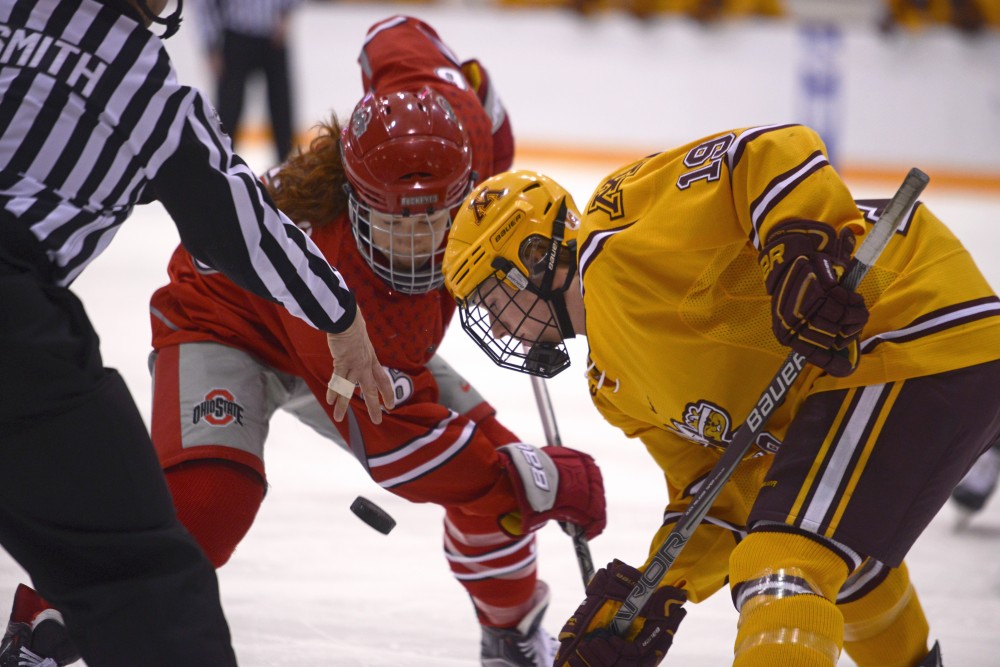 Forward Kelly Pannek watches the puck drop during a game against Ohio State on Feb. 27, 2016.

Kelly Pannek didn’t play for the Gophers last season —  but for good reason. She was on the United States women’s Olympic team and came back to Minnesota with a new piece of hardware.

Team USA defeated Canada in the gold medal game on Feb. 22 in 3-2 in a shootout. U.S. goaltender Maddie Rooney made the winning save, setting off a celebration two decades in the making.

Pannek said her reaction to Rooney’s save was pure excitement.

“You’re jumping over the boards as fast as you can and trying to hug whoever you can,” Pannek said. “It was a powerful and emotional moment.”

Canada had won gold at each Winter Olympics since 2002. Canada defeated the U.S. in the previous two gold medal games, including a come-from-behind overtime win in the 2014 gold medal game.

Pannek said participating at the Winter Olympics in South Korea was a powerful experience.

“To be able to experience everything with our team, especially the opening ceremonies, was special,” Pannek said. “It’s something that I can’t even describe because there are so many feelings going through you.”

Pannek said re-adjusting to the NCAA ice won’t be an issue.

“We played on a lot of NHL-sized rinks [at the Olympics],” she said. “There’s some adjustments, but it’s easier going back to smaller ice than it is going to [Olympic-sized] ice.”

“It’s great to see a teammate doing so well,” Schammel said. “We were all [Pannek’s] biggest supporters last year. Having [her] back is great.”

In addition to winning a gold medal at the Winter Olympics this year, Pannek was a member of Minnesota’s NCAA Frozen Four winning teams in 2015 and 2016. She was a finalist for the Patty Kazmaier Award in 2017. The Award was established in 1998 and is given to the most outstanding player of each NCAA season.

“They know that they’re going to have an opportunity with and against her each day in practice,” Frost said. “It keeps them motivated to improve and she’s helping them along the way.”

After taking off a year to play in the Olympics, Pannek is excited to be back with the Gophers.

“This team is full of [experience] at different levels in various ways,” she said. “I’m excited to be back with the team.”