The Minnesota Daily • May 5, 2011 • https://mndaily.com/189618/arts-entertainment/film/interview-kristen-wiig-wendi-mclendon-covey/ 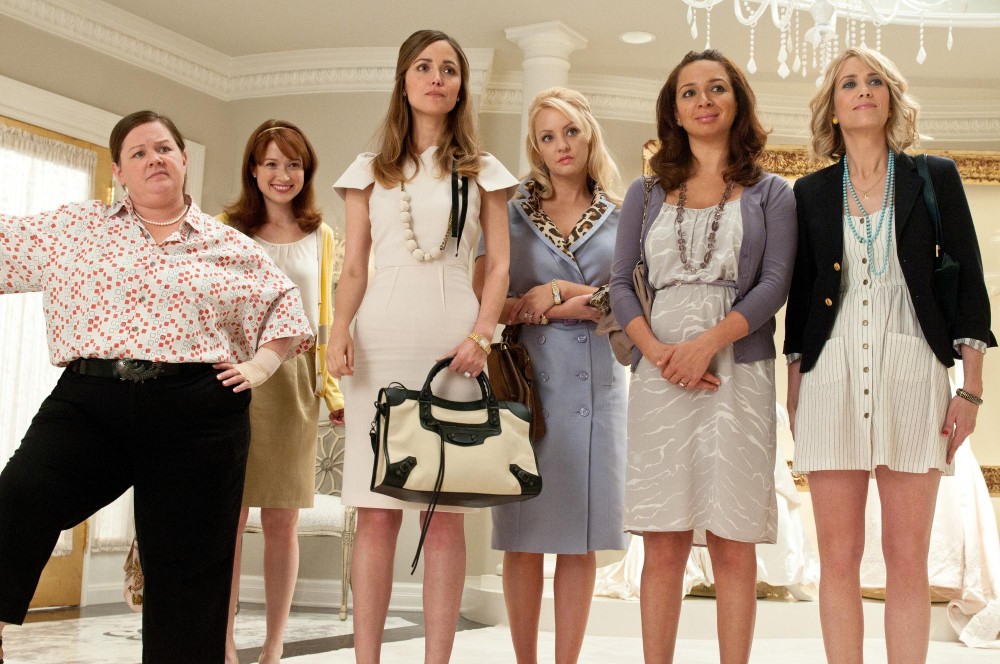 Like âÄôem or love âÄôem, Kristen Wiig and Wendi McLendon-Covey are funny. Whether Wiig is one-upping everyone as the prissy Penelope, raising hell as the smiling and mischievous schoolgirl Gilly on SNL or McLendon-Covey is lethargically kicking ass and taking names as the saucy Deputy Clementine Johnson on âÄúReno 911!,âÄù these nonpareil performers have already left their stamp on comedy as the everymanâÄôs funny-woman. On May 13, theyâÄôll appear together as members of a disorderly bridal party in âÄúBridesmaids,âÄù a movie Wiig co-wrote with friend Annie Mumolo about the conflict-ridden backstage to weddings.

Writing the movie, how did you work with the fact that âÄúBridesmaidsâÄù is going to be tagged as a chick flick?

Kristen Wiig: We really didnâÄôt think about it when we started writing it. Mumolo is a co-writer, and we just kind of thought of ideas that would be fun to do and that would have a lot of ladies in the cast âÄî âÄôcause that was really important to us âÄî and she had this idea of like, well, what about if we just told the story of what itâÄôs really like to be in a wedding and have it focus more on the bridesmaids than the bride, female friendships and all that stuff. We just kind of wrote it out. We didnâÄôt really think about that stuff too much

It turns the whole âÄúchick flickâÄù genre is on its end because it shows that women can be just as violent and gross as everybody else.

Wendi McLendon-Covey: Right. And that we donâÄôt just shop for Manolo Blahniks in a montage.

Judd Apatow has these archetypal characters in his films. Were you concerned with people watching your movie and trying to find those corollary characters âÄî like, âÄúThatâÄôs Jonah HillâÄù or, âÄúThatâÄôs Seth Rogen?âÄù

KW: Oh God, I never thought about that. After I did âÄúKnocked UpâÄù [Apatow] was like âÄúDo you want to write something for yourself?âÄù and he didnâÄôt tell us what to write or anything. In the beginning he just said âÄúPitch me some ideas, and you can write it by yourself; you can write it with a friend.âÄù So I asked Mumolo who IâÄôd worked with at the Groundlings, and whoâÄôs one of my best friends. She had this idea and we pitched it to him and he was like, âÄúGreat! Write it up.âÄù ThereâÄôs definitely things in the movie, a lot of things, where both Paul and Judd were like, âÄúReally? Women say that? Or donâÄôt women do this? DonâÄôt women talk like this?âÄù

KW: We were like, âÄúWe really talk about this, or we donâÄôt ever talk about that.âÄù But they wanted to know and they were very involved in all of that.

WMC: They were a little confused in the beginning âÄ¦ WeâÄôd be in rehearsals, the six bridesmaids, Kristen would say âÄúWell, yeah, this is what happens all the time. I guarantee you this is what happens.âÄù It took all of us together, talking to them, saying, âÄúWeâÄôre not lying. This is how stupid wedding showers get. And it doesnâÄôt make sense that we still attend. But we do it. And this does happen.âÄù They were a little taken aback by what we were telling them. To their credit, they listened, and we have the movie that we have. But they were a little shocked.

How did you get in touch with your character, the desperate housewife and underappreciated mother, Rita?

WMC: IâÄôve got no kids myself. My marriage is very good. IâÄôm a basically happy person, so I just look to the outside and eavesdrop on other peopleâÄôs conversations. You know, listen âÄ¦ IâÄôm not going to lie and say that I didnâÄôt take this from some of my friends who got married and had kids very quickly and thought âÄúOh this is going to complete me as a woman.âÄù âÄòCause IâÄôve never had those urges. I have no maternal instincts at all. And I honored those instead of saying âÄúWell, IâÄôll have the baby and then the instincts will kick in.âÄù It doesnâÄôt happen.

KW: I find you very maternal.

WMC: Really? Would you like me to scratch your back a little bit and make you some soup? Annie is kind of a cut-up. Is she based on yourself? But you seem to have your life together.

KW: Well now… I mean I never feel like I have my [expletive] together, but I think the story of a woman in her thirties who doesnâÄôt know what she wants to do and feels like she has to figure out what it is for the rest of her life and is surrounded by people that she thinks have it figured out; I think thatâÄôs really common. And, especially in this business, it didnâÄôt happen overnight. There were years where I would go back to my hometown and visit my friends. Did I want to talk to them about my apartment that was above a garage? And that I was going to auditions and they had this beautiful home and kids and theyâÄôre married? Yeah, there was a little bit of like, thereâÄôs something wrong with me. And of course looking back, thatâÄôs ridiculous. WeâÄôre not trying to send a big message with [âÄúBridesmaidsâÄù] but I would like to say that you donâÄôt have to be married.

Your Saturday Night Live characters are timeless in a way that calls older SNL to mind. Where do characters come from?

KW: I did watch a lot of SNL growing up. I watched it religiously in high school. ThereâÄôs no one place they come from. If I had a list of them I could say that they all probably came from different places. A lot of it for me is just hearing people. Aunt Linda, for instance, was a woman that I heard on a plane who was watching the movie that they show. She had her headphones on and she was really confused by the movie. And she kept yelling and turning around. Everyone has their earphones on, theyâÄôre watching the movie, but I thought it was so funny and I took out a piece of paper and I was writing down things that she said. I have never done that with anybody else. Gilly literally came from sitting in a room with a writer and saying âÄúI wanna write a character that has a face like this.âÄù And it just came from that. Sometimes it comes from people, other writers will have ideas…

What about Penelope, the one-upper?

KW: That was based on somebody that I knew. Obviously exaggerated. But it was just a weird thing that I noticed that she did sometimes.

Do you have any advice to women?

KW: DonâÄôt be so hard on yourself.

WMC: Blaze your own trail. DonâÄôt look to magazines or anyone else to validate you because theyâÄôre not trying to validate you. TheyâÄôre trying to sell you things. Just figure it out for yourself. YouâÄôre fine the way you are.