In the University of Minnesota dance program's "Productions" course, students get a chance to produce their own showcase. 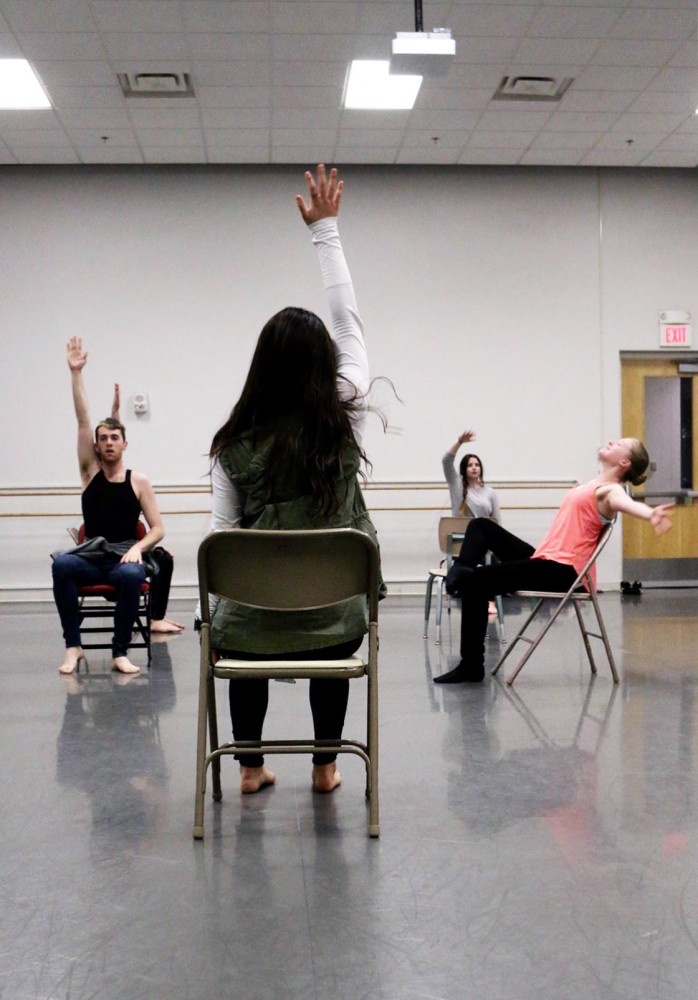 Student dancers rehearse for a student-choreographed production called "Three Evenings" at the Barbara Baker Center For Dance. The show is the product of a University of Minnesota dance class and will premiere in early April.

Although skills can be learned in classrooms, hands-on experience is perhaps most fulfilling for students — especially for those seeking careers in creative fields.

Through the “Productions” course in the dance program at the University of Minnesota, students have the opportunity to step backstage and produce their own dance showcase.

The course is a requirement for dance majors studying at the University. This year’s show is entitled “Three Evenings.” It opens March 27.

The showcase’s mission statement, “Curious making, creative exchange,” speaks to the exploratory nature of the program.

“We are a class of 11 students. We all have different teams,” said Katie Kummerow, a University sophomore studying dance. “I’m on the marketing and press team with two other students.”

All six of the show’s choreographers are students as well. Deciding to focus on the potential of new work, the class chose to rate potential choreographer’s proposals rather than hold auditions.

“Every choreographer is going in their own direction,” Kummerow said.

The choreographers were chosen through an application process that assessed the relevance of their work to the showcase’s mission statement. No two numbers are alike.

“There’s a modern number; there’s a jazz number,” Kummerow said. “One of the dances actually has the choreographer’s mom in it.”

Students in the class meet on Monday nights to hold production meetings, and decisions are made collaboratively.

“We have team meetings and then production meetings. [We] discuss everything and decide what needs to happen,” Kummerow said. “There’s also communicating with the choreographers.”

The task of producing a show from the ground up is one that requires strong communication skills and strict attention to detail.

“There’s so much to do for a show. We’ve already written a grant. We’ve hired a lighting designer. We’ve created our own logo,” Kummerow said. “There have been some disagreements, and appropriately addressing them is something that we’ve been learning.”

The class runs for two semesters — the first is structured around theoretical learning, whereas the second involves producing the showcase.

To better guide the students through the process, the class brings in guest speakers who work in various aspects of creative production.

Through the course, students find their place in a creative world while learning the type of labor their field requires.

“It taught me how to collaborate,” Kummerow said. “[It’s about] being dedicated to what we’re doing.”