At around midnight Sunday, police came to arrest Rashad Bowman at an East Bank hotel. 38 hours later, he was taken into custody. 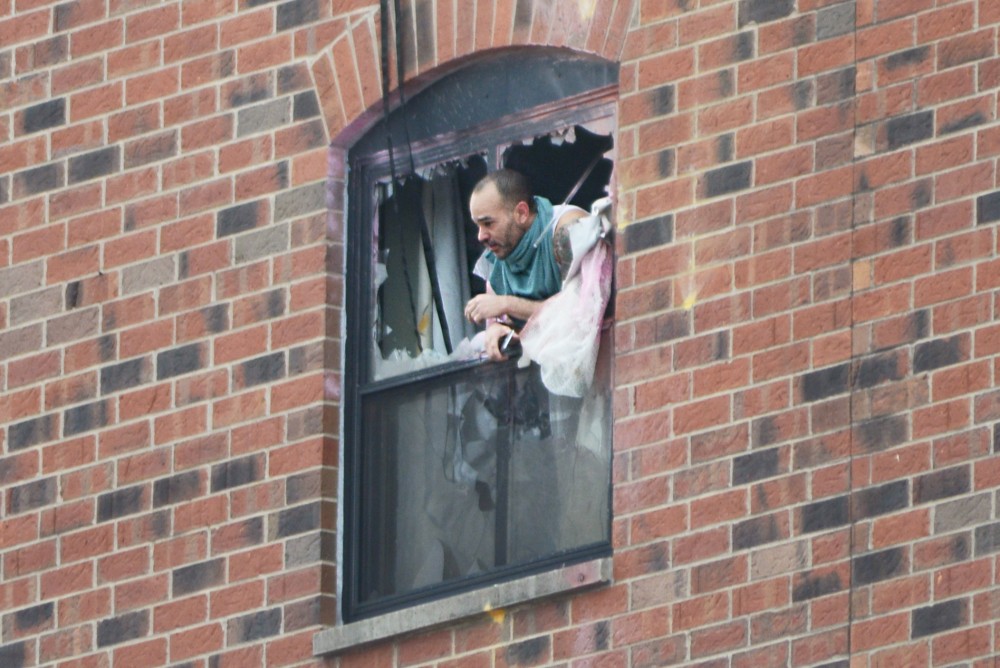 Rashad Bowman, 46, pokes his head out the sixth floor window at 11:40 a.m. after police fired gas into a room at the Graduate Hotel.

Just after 1 p.m. Tuesday, 37 hours into a standoff, a pair of police flash bang grenades detonated inside 43-year-old Rashad Bowman’s hotel room on the University of Minnesota’s East Bank campus.

Police shot gas munitions throughout the situation after Bowman threw a microwave out of his sixth-floor Graduate Hotel window earlier Tuesday. The munitions’ smoke poured from windows, and loud pops from flash grenades were audible across much of the nearby area.

At times, Bowman climbed out onto the window’s ledge and sat or stood while talking on the phone. Another flash-bang detonated as he straddled the window.

The situation ended with the Woodbury man’s arrest within the hour.

Sought after for a white-collar crime, Bowman’s 38-hour standoff with police turned into a spectacle that transfixed much of the University community. Bystanders stopped to observe the events, and a lack of official information raised uncertainty across campus.

The standoff began around midnight Sunday after police arrived at the hotel room to check on Bowman’s well-being and serve an arrest warrant for an Arizona felony.

Bowman was in the room with an unidentified 40-year-old woman, and claimed he was armed when police reached his hotel room. Police contacted Bowman’s local relatives and learned he owned a handgun that was missing, said University Police Chief Matt Clark in a Tuesday press conference. From the earliest stages of the confrontation, negotiators from the University of Minnesota Police Department, Minneapolis Police Department and SWAT units from Roseville and Brooklyn Park pleaded with Bowman to give himself up.

As the Monday school day drew nearer, Clark said the department chose to notify students and faculty of the situation. The rest of Monday was spent in talks with Bowman that eventually led to the woman’s release from the room around 8:30 p.m.

“The goal from the beginning and through the end was to resolve this with nobody being injured,” said Minneapolis Police Department Assistant Chief Mike Kjos in a press conference Tuesday.

Police have shared few details about the negotiations that took place. What they revealed on Tuesday was that the man spoke of grievances over his personal life and history, along with the arrest warrant that would lead to his extradition to Arizona.

“It was a contained environment on one floor inside the hotel. There wasn’t really a need to rush in and cause an incident to take place,” Kjos said. “Time was on our side at that point, and in the end it was the right decision to wait him out. We were negotiating with him throughout the entire period, and the hope was that he would eventually just walk out and turn himself in.” The Star Tribune reported Bowman’s reactions came after the alleged theft of his exotic cat caused him to become unstable. He posted on his Facebook page about the cat theft throughout the standoff.

Regardless of his motivations, Clark said the situation escalated Tuesday morning.

Bowman threatened to kill himself and others while barricaded in his hotel room with mattresses and other items against the door.

Clark said Bowman claimed he was going to “torch or burn the hotel down,” adding new urgency to the joint police force’s decision-making.

“[Assistant Chief Kjos] takes a lot of time, and thought and effort into how he handles situations to make sure everyone gets out safe, and I agree with that procedure,” Clark said in the Tuesday press conference. “But when this individual starts setting fires and making claims that he’s going to burn down a building that’s occupied, then we have to act immediately and that’s what you saw today.”

Just before 10 a.m. Tuesday morning, Bowman threw a hotel microwave out of his room’s window. Police subsequently fired their first gas canisters into the room through the hole.

WATCH: The moment the suspect tossed what appears to be a Microwave from his 6th floor room. Standoff at Graduate Hotel now going on 35 hours. @KSTP pic.twitter.com/zF8SZbaLVO

Later, the police used a stick tool to clear the window and fire more gas canisters periodically into the room.

Ten minutes later, around 11:40 a.m., Bowman first leaned his head out of the window. He soon receded to the room for another hour.

Burn marks scarred the top of the window where smoke billowed upward from periodic gas cartridges.

Then 1:09 p.m. came, and with it flash-bangs. What appeared to be a pillow appeared in the window, followed by a lighter’s flame that grew brighter as it took to the fabric.

An officer used the stick tool again, this time to dislodge the pillow. It dropped from the window ledge and burned in the parking lot.

Following this, police rammed the door, breaking it into two pieces and tearing it off its hinges. Then Bowman mounted the window. At times, he was talking on his cell phone, sitting on the ledge of the window and sometimes standing, Bowman continued to resist as police called out, telling him he was under arrest.

“Officers were very concerned when he was outside of the window that he would fall and either become seriously injured or that he would die,” Clark said Tuesday. “They backed off and that’s why it took quite a while once they were in the room to get him to come back inside.”

Eventually, a third flash grenade detonated inside the hotel room at 1:38 p.m. and Bowman was arrested at 1:43 p.m. in his room.

Who is Rashad Bowman?

Bowman’s motive for the standoff remains unclear, but posts from his Facebook page during the incident reveal frustrations over an alleged pet theft.

In a Facebook post by Bowman early Tuesday afternoon, he alleged that two women he knew had stolen his cat, and included the phone number of a woman to “make their lives hell.”

He responded to posts in the comment thread throughout the standoff. Bowman had a troubled past prior to his arrest. He was convicted in 2001 in Maricopa County Court for fraudulent schemes, Arizona state prison records show. A Washington Post story published in 2014 said his incarceration caused a rift in his family.

That family trauma escalated for Bowman in 2014. His daughter, Alyssa Funke, killed herself that April. Funke was a Stillwater native and straight-A student at the University of Wisconsin – River Falls, according to the Washington Post.

Campus reacts to the tension at the Graduate

Many students posted on social media questioning why the school hadn’t shut down classes. Throughout the event, a number of media reports and comment threads on social media falsely or prematurely reported that the man in the room was armed or that the ongoing negotiation was a hostage situation.

University spokesperson Chuck Tombarge said police never used the term “hostage situation,” and Clark said the police had not found a weapon in the hotel room as of Tuesday at 2:30 p.m.

For most students, news of the standoff started vague and early. The University sent both text and voice messages to students to alert them of a “public safety incident” at the hotel just before 6 a.m. Monday. “How soon do we want to notify the public and the campus community that there’s an issue?” Clark said in a Tuesday press conference after the arrest. “We handle a lot of issues, whether it’s in the city of Minneapolis or with this campus. In this situation, we felt it was important to notify people at the time that we did when we knew we couldn’t resolve the situation in the early morning hours.”

Clark said police were confident the rest of campus and the hotel could continue operating as normal since the issue was contained to a single hotel room.

For those in the hotel, this prospect was at times confusing and frightening.

Many guests at the Graduate Hotel continued to come and go freely throughout the situation.

Clark said police tried to notify as many guests as possible about the situation, but some were surprised by it when they left their rooms Monday morning without reading news reports.

The school’s notices to students alerted them the University Recreation and Wellness Building and Washington Avenue Parking Ramp were closed. They remained shut down until after Bowman’s arrest, along with the north parking lot of the hotel, portions of Scholars Walk and Beacon Street Southeast between Harvard and Walnut Streets.