The candidates have been participating in public forums to introduce themselves, which will conclude this week. 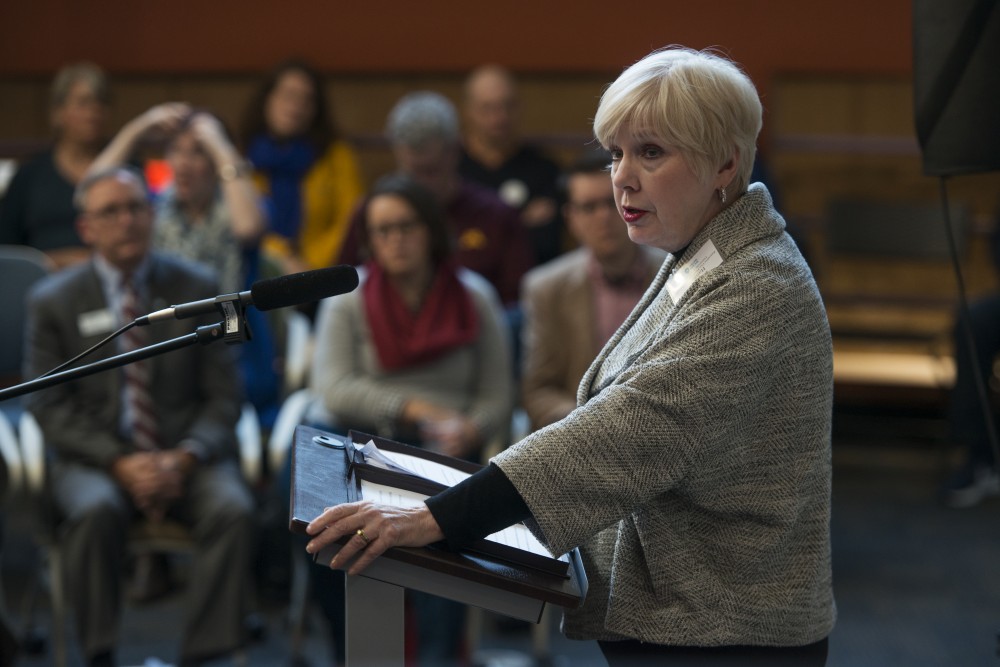 Provost Karen Hanson addresses the opening of the "We Are Water" exhibit on Friday, Sept. 12, at the Institute on the Environment.

All four candidates for the University of Minnesota’s provost position have been announced.

Two of the candidates have already spoken at public forums, and the remaining candidates will participate in forums Monday. The forums are a result of a months-long search process to find the next chief academic officer for the system.

With the help of a search firm, a search committee made up of University faculty, staff and students selected the four candidates from a pool of about 60. President Joan Gabel was largely removed from the process, though it will ultimately be her decision who will be hired as the next provost.

Antonio Dwayne Tillis, current dean of the College of Liberal Arts and Social Sciences at the University of Houston, was the first candidate to be announced.

Before joining the University of Houston in 2017, Tillis served as dean of the School of Languages, Culture and World Affairs at the College of Charleston, according to his curriculum vitae, a more comprehensive version of a resume often used in academia.

When Tillis started at the University of Houston in 2017, he said he was attracted to Houston because of its “commitment to academic excellence, its diverse student population as well as its mission to be a premier academic institution.”

Gregory Washington, the current dean at the University of California-Irvine’s engineering school, was announced as the second candidate.

As the current dean of the Henry Samueli School of Engineering at Irvine, Washington led strategic planning efforts, a process currently underway at the University of Minnesota and one in which the next provost will be a major player.

Washington is the first African American to head any engineering school in the University of California system.

Rachel Corson, a current dean at Michigan State University, was unveiled as the third candidate.

With a degree from the University of Pennsylvania in economics and philosophy and two more in economics from Harvard University, Corson has been the dean of the College of Social Science at Michigan State since 2016.

Corson taught at Penn for 13 years starting in 1994, is published in more than 70 times in peer reviewed journals and has been an editor of several economic journals.

Carol Fierke, the current provost at Texas A&M University, was announced as the final candidate.

Fierke has a local connection, graduating in 1978 with a bachelor’s degree in chemistry from Carleton College in Northfield, Minnesota. She has a Ph.D. from Brandeis University in biochemistry and has done postdoctoral study at Pennsylvania State University.

Unlike the other three candidates, Fierke is currently a provost and oversees 17 colleges and schools at Texas A&M. She has experience balancing a billion-dollar-budget, like the budget at the University, and has developed a five-year strategic plan, a current undertaking at the University of Minnesota.

Before being a provost, Fierke served as a dean of the graduate school at the University of Michigan. She has previously taught at Michigan and Duke University. She has published 251 research articles.