Minn. looks to surge into playoffs

The Gophers host Wisconsin for the final regular season series. 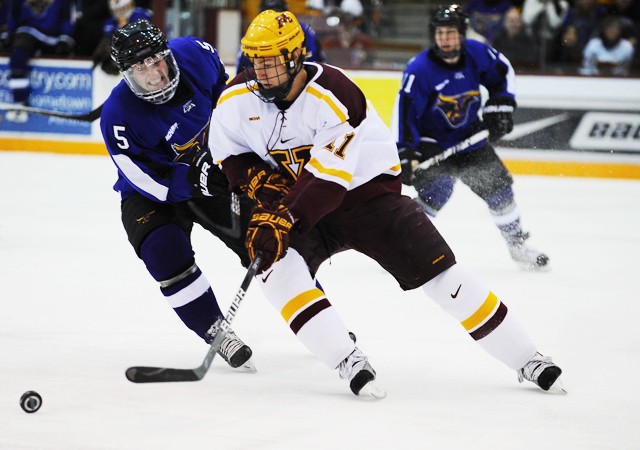 An up-and-down regular season in which the Gophers menâÄôs hockey team opened the year 0-3-1 before making a late season surge concludes this weekend with a series against archrival Wisconsin. Due to a scheduling conflict, Minnesota will host the Badgers in a rare Friday/Sunday series, with FridayâÄôs game being played at the Target Center. The Gophers will be playing their first game at the Target Center since 2000, when the venue hosted the Western Collegiate Hockey AssociationâÄôs Final Five tournament. While Minnesota hasnâÄôt played at the Target Center in 10 years, they do have a history of memorable games at the venue against the Badgers. For seven-straight seasons, beginning with the 1991-92 campaign, the Gophers played Wisconsin in one home game at either the Met Center or the Target Center. Though Minnesota experienced success playing in bigger venues such as the Target Center âÄî 7-4-1 all-time at the Target Center âÄî itâÄôs not a situation head coach Don Lucia would label ideal. âÄúIt takes away all of the home rink advantage because weâÄôre not playing at home; weâÄôre going to go to a venue that nobodyâÄôs ever been in before,âÄù Lucia said. âÄúThe good thing is that more than likely weâÄôre going to be in a small rink next week, so weâÄôre continuing to play in another small rink environment this weekend.âÄù While Minnesota has traditionally dominated the Badgers at the Target Center, this is a very different team from 10 years ago. Wisconsin head coach Mike EavesâÄô squad enters the weekend ranked No. 3 in the nation and is powered by an offense with seven senior forwards. The Badgers are second in the country in offensive output, scoring just more than four goals per game. In the previous series against the Badgers earlier this season in Madison, Minnesota managed a split thanks to goalie Alex Kangas , who made a career-best 45 saves. As the team looks to carry momentum forward for the playoffs, Lucia knows Kangas and the rest of the team will have to continue playing solid hockey starting with this weekendâÄôs series against Wisconsin. âÄúWe want to make sure we have a good weekend, as far as how weâÄôre going to play, and have some successful results so as we head into the following weekend, we can hopefully keep that good play going,âÄù Lucia said. Minnesota will likely receive added help this weekend, as sophomore forward Taylor Matson , who has missed 15 games following an ankle injury suffered Jan. 2, is expected to return for SundayâÄôs game. âÄúHe practiced full-go yesterday and actually, he looked good,âÄù Lucia said. âÄúI donâÄôt think heâÄôll play Friday, but weâÄôre really hoping to get him into the game on Sunday so heâÄôll be ready to go for the playoffs.âÄù SundayâÄôs tilt will be the final game at Mariucci for five Gophers seniors, who will be honored after the game ends. âÄúIt definitely has gone by a lot faster than I wouldâÄôve liked it,âÄù senior forward Tony Lucia said. âÄúIâÄôve been fortunate to be a part of some pretty fantastic and fun teams.âÄù While Don Lucia will take his usual spot on the ice after the game to honor the seniors, this year he will also be experiencing the event for the first time as a parent of Tony rather than as a coach. âÄúItâÄôll probably be as hard on my wife as anything else; she certainly enjoyed the last four years, getting an opportunity to watch him play,âÄù Don Lucia said. âÄúIâÄôve always looked at it as a special day for the seniors.âÄù Last weekendâÄôs split against Minnesota-Duluth assured Minnesota of just its third opening round road match-up in 11 seasons. For a team looking to win that series and head to the WCHA Final Five for the 12th-straight time, the men know that journey begins with a solid effort this weekend against the Badgers. âÄúThe most important thing is we just want to continue to play well,âÄù Don Lucia said. âÄúIf we keep playing like we are right now, weâÄôll be fine, and thatâÄôs what we want to do again this weekend.âÄù