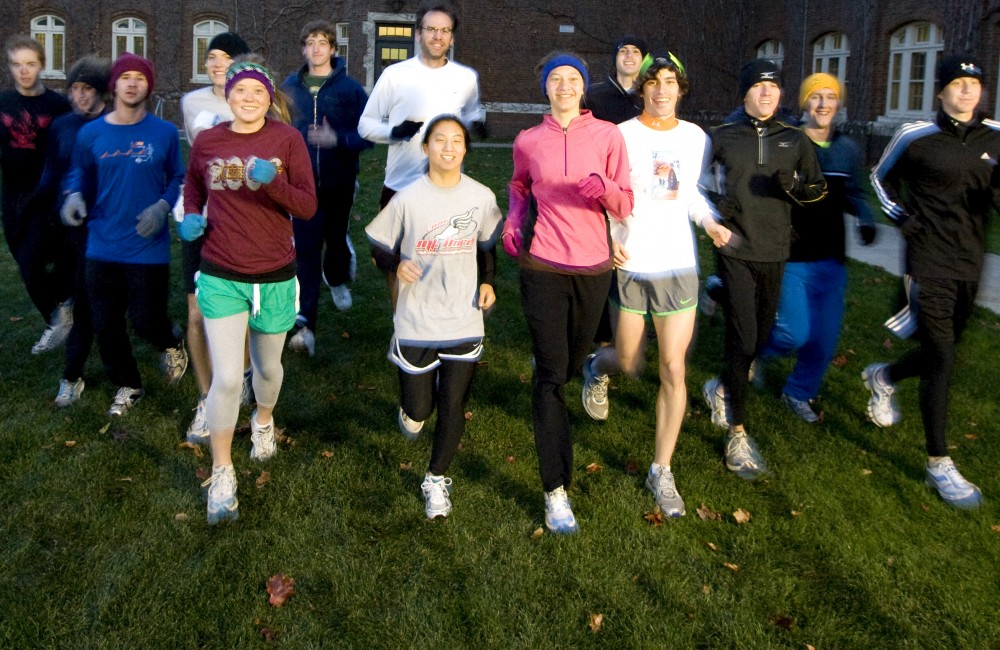 The University of Minnesota Running club placed 12th out of 24 teams in its second appearance at the National Intercollegiate Running Association’s National Championship meet at Penn State University last weekend. The Running Club finished behind other Big Ten club teams including the University of Wisconsin.

After 34 hours and 2,200 miles on the road, the University of Minnesota Running Club menâÄôs team placed 12th out of 24 teams in its second appearance at the National Intercollegiate Running AssociationâÄôs National Championship meet at Penn State University last weekend. Running Club President Steele Lorenz said he was pleased with the results and that the placement reflects the clubâÄôs growth and member commitment. Lorenz said the national championship is only three years old, but has grown from 13 competing teams last year, to 24 teams competing this year in the menâÄôs 5.2 mile race. The UniversityâÄôs club has seen a 200 percent growth in membership this year. This year, the University Running Club finished behind other Big Ten club teams including the University of Wisconsin, which took first place; the University of Michigan, which took third place; University of Illinois; Indiana University; Penn State University and Purdue University. Accounting junior Hal Brown finished with the UniversityâÄôs top time of 28 minutes, 44 seconds, placing 24th out of 296 competing runners. âÄúI am definitely happy, but at the same time, I didnâÄôt run time-wise what I thought I could do,âÄù he said. Brown said with club membership growing, he would like to see a top-five overall finish at nationals next year and a top-10 individual finish for himself. But, beyond big goals, the club is aiming to cater to runners with varying abilities. Lorenz said the club splits up its 40 regular runners based on how fast they want to go and how far they want to run at daily practices. Last year, Lorenz said the group only had about seven runners on a regular basis. âÄúWe have anywhere from people who are training once or twice a week, to people who work out 10 to 14 times per week,âÄù he said. A co-ed organization, the running club has also seen an increase of participation on the womenâÄôs side this year. First-year student Brittany Pentek joined the club this fall and got together the first group of women to compete at nationals. Although this year the team was one woman short of the five team members needed to be considered for team scoring, one woman, Libby Zupanc , finished 18th out of 183 competitors in the 6K. Pentek said with more women in the club this year, she decided someone needed to get women competing. âÄúMy goal in getting the girls team together was giving them the opportunity to express their talent,âÄù she said. Lorenz said although the team had primarily been made up of men in the past, this year the practices have been about half men and half women. âÄúHonestly, I think the running club could be the biggest club on campus,âÄù he said. âÄúI feel like everybody runs and everybody likes to do it in a group. I donâÄôt see why we canâÄôt get a couple hundred active members in the next couple of years.âÄù