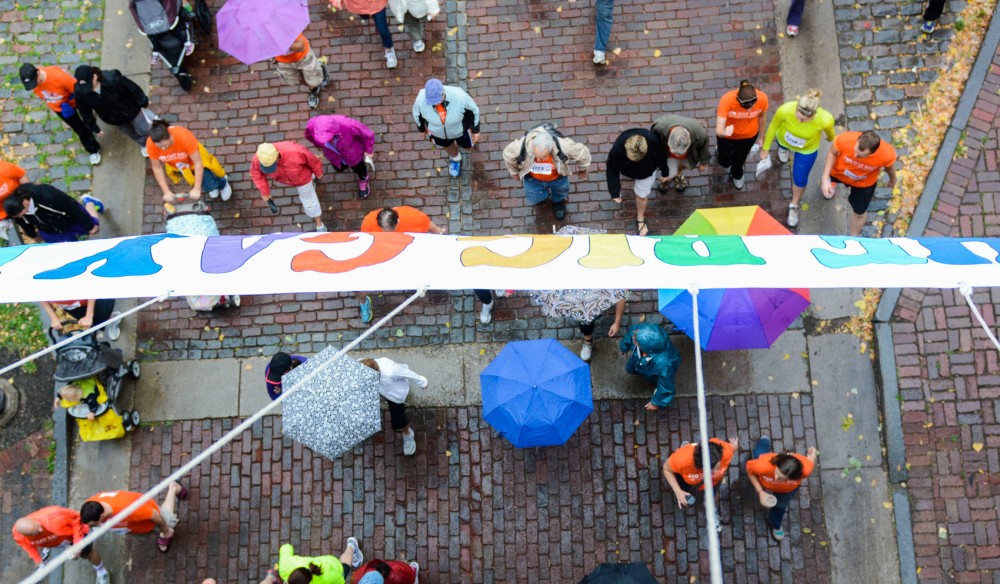 Participants start the Big Gay Race 5K under the Central Avenue bridge on the St. Anthony Main Street on Saturday.

Last year, the Big Gay Race rallied almost 7,000 people to help defeat a constitutional amendment that would have banned same-sex marriage in Minnesota.

A year later, with the amendment defeated and same-sex marriage legalized, only about 2,000 people turned up on St. Anthony Main Saturday for the 5K’s third year.

“[Last year], people really wanted to make sure they were showing opposition to the amendment and supporting marriage equality,” she said.

In the past, the race was intended to fight the amendment. But this year, its purpose has shifted to a focus on supporting legislators who voted in favor of same-sex marriage last session.

“It was a little less intense and more of a celebration,” she said.

When Dibble asked if there were any newlyweds in the crowd, Miller said, there were lots of cheers.

Two years ago, Frey founded the event to raise money to block legislators from putting the marriage amendment on the ballot. The next year, money went to Minnesotans United for All Families, a campaign started by OutFront Minnesota and peer organization Project 515 to defeat the amendment.

He said last year’s event — about a month before the election — was the first time he felt defeating the amendment was possible.

Now, the conversation has shifted. MN United has been repurposed as a political action committee to reelect state legislators who voted to legalize same-sex marriage.

The purpose of this year’s race was to raise money for the PAC and to “celebrate the accomplishments” the groups have made toward marriage equality, Frey said.

To decide which candidates to contribute to, Meyer said, the groups will likely look at same-sex marriage supporters who will have the “toughest” opponents.

Miller, who volunteered with MN United last year, said even though the same-sex marriage discussion has changed, the conversation isn’t over.

“People are expecting everything to settle back down, and some people think the race isn’t as relevant,” she said. “But I still think it’s important to maintain the momentum.”