Save it for a Rainy Day

Minneapolis alt-country pioneers the Jayhawks reunite for the reissue of three classic albums. 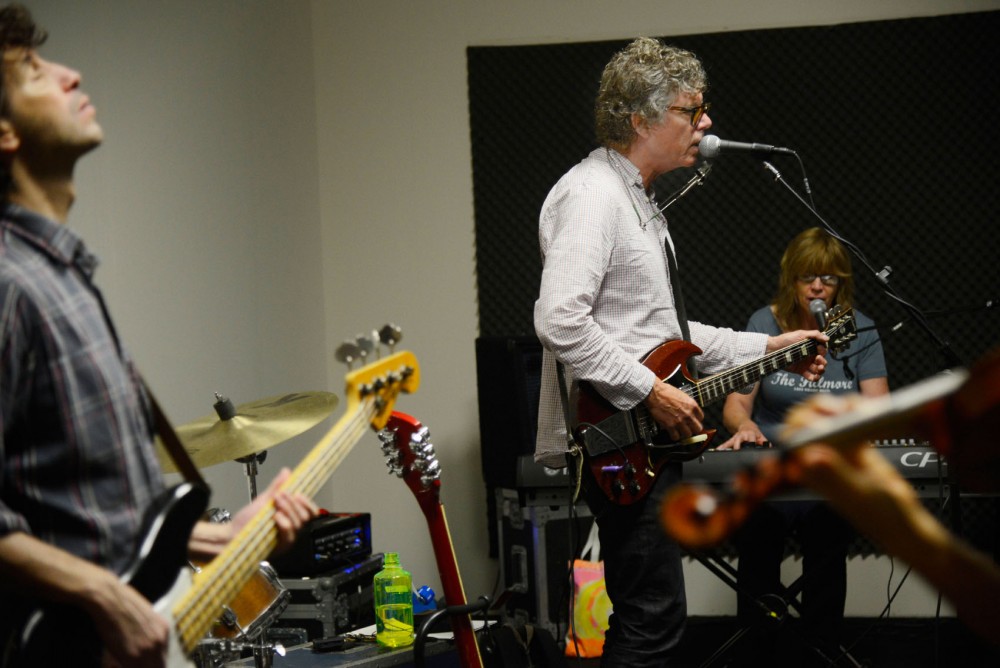 Gary Louris, lead singer and guitarist of The Jayhawks, rehearses with band members Marc Perlman and Karen Grotberg on Tuesday. The Jayhawks are often accredited as founders of the alternative country genre in the 1980's.

Gary Louris leaned against his periwinkle 1990 Mercedes-Benz in the gravel parking lot of St. Paul’s City Sound rehearsal spaces. Louris looked like the rock star he is while he glanced out at the abutting railroad tracks, clad in tartan sneakers, dark blue skinny jeans, Ray Ban Clubmasters and an ingrained sneer. Though his pristine car shone like a million dollars under the drizzling skies, Louris bought it for an outstanding bargain.

Louris is the longtime vocalist of the Jayhawks. The Minneapolis alt-country mainstays formed in 1985 with Mark Olson at the helm.  Louris joined the band three weeks after they formed. The duo shared vocal duties until Olson departed in 1995. After Olson left, Louris steered the band’s sound between Gram Parsons and Graham Parker before returning to their roots on 2003’s “Rainy Day Music.”

The Jayhawks reunited this April, commemorating the reissuing of three of their albums: 1997’s “Sound of Lies,” 2000’s “Smile” and “Rainy Day Music.”  The band’s current incarnation is a carbon copy of the 1997 touring lineup, featuring bassist Marc Perlman, drummer Tim O’Reagan, guitarist Kraig Johnson and keyboardist Karen Grotberg. They’ll stop by the reopened Turf Club on Thursday and are playing a two-night stint at First Avenue on Friday and Saturday.

The band just returned from the European leg of their tour and will embark for the South and the East after the Minneapolis gigs.  Louris is glad to be back in the saddle with his electric guitar.

“I put on my electric guitar, and I feel like I’m 10 feet tall,” he said. “It brings out a part of my personality that’s more aggressive and darker.  It’s really cathartic to play.”

Louris argued that 2011’s “Mockingbird Time” is the nadir of the Jayhawks’ oeuvre. That record marked the brief return of Mark Olson, and the duo’s folk-rock harmonies provided a spectacular backbone to each track.  The album was a critical success, but it left Louris with a bad taste in his mouth.

“I don’t like [it],” Louris said. “The intent was good – we wanted to not just put out a reissue, but actually show that we could still make music. The chemistry wasn’t there. Some people like it; it wasn’t a good period of my life. I was battling drug and alcohol addiction. It could’ve been a great record, but I don’t think it was.”

Tension between Olson and Louris as well as Louris’ struggle with substance abuse contributed to the band’s breakup in 2012.  Louris emerged clean and played several solo gigs around town in 2013. Despite his recovery, he approached this year’s Jayhawks reunion with trepidation. He made it clear that the band has no intent to record any new material any time soon, if at all.

“I’m definitely tepid about recording again,” Louris said. “Doesn’t mean it wouldn’t happen, but most likely not. I’ve tried to carve out a life after the Jayhawks, but it keeps pulling me in. As long as I’m not doing it 24/7, I really like it, especially with this group of people.  Once I’m in it, I’m into it.”

The other part of Louris’ hesitation to regroup stems from his need to look ahead.

“You want to feel like you’re not just living in the past,” he said. “If you are just visiting — especially when you’re celebrating these reissues — it makes sense.”

Outside of the Jayhawks, Louris is working on a couple collaborations, as well as a solo electronic album.

“I’m taking things off my record collection and manipulating them and adding weird shit,” Louris said. “[I’m] making stuff that maybe only I would like.”

With the Jayhawks’ reunion tour and a predisposition to both curiosity and procrastination, the album remains without a timetable.

“That’s something I have to work on — finishing,” Louris said. “Without a collaborator — if you don’t have somebody cracking the whip — it’s hard to finish stuff.”

The album represents Louris’ listening habits. Though he’s one of the seminal figures of alt-country, he doesn’t listen to other music from the genre at all.  He grew up steeped in classic rock, which morphed into an obsession with art rock and the New York punk scene over time.

“I was more experimental in my approach before the Jayhawks started,” Louris said. “I listened to a lot of krautrock. I don’t listen to much song-oriented stuff.  That’s where my interest lies. I just haven’t figured out how to find a niche and how to make it something I can live on.