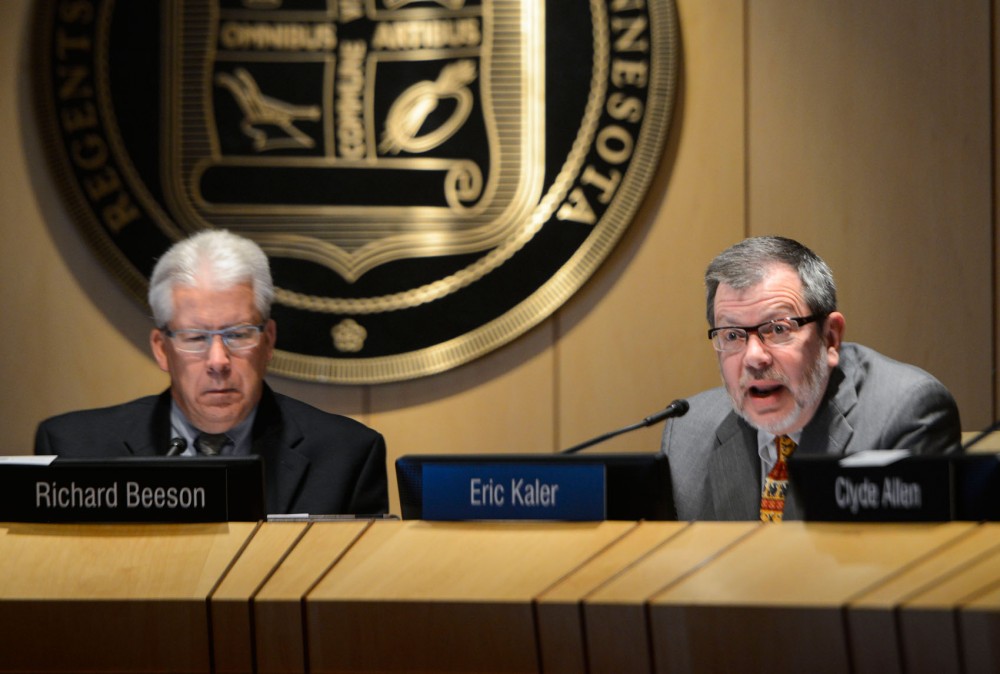 President Eric Kaler speaks at the Board of Regents meeting at McNamara Alumni Center on Friday. The board approved the Athletic Department's request to sell student tickets to the general public earlier in the season in the hopes of increasing attendance on game days.

The University of Minnesota is trying to fill its student section at Gophers football games — even if students alone aren’t enough.

After years of student season ticket sales plummeting, the University’s Board of Regents approved the athletics department’s request on Friday to make unsold student tickets available for the public sooner. University officials say the move will increase attendance and improve the overall atmosphere at Gophers football games.

In the past, the public could purchase any unsold student section tickets beginning the Tuesday before each game, but now those tickets will go on sale the Monday after the first week of school. The University will reserve at least 6,000 seats for students each game.

The student tickets would only become available once fans buy all other stadium seats. Mike Ellis, the University’s executive associate athletics director, told the board that could happen if the Gophers continue to perform well. The Athletics Department would start by selling student tickets on the edges of the section.

By selling student tickets to the public earlier, Gophers athletics hopes to fill the more than 52,000-seat stadium and create a stronger “sense of urgency” among students as they buy tickets, Ellis said.

“What we’re trying to do is create a better environment for our football game days,” Ellis said.

University athletics officials said they hope to build an atmosphere similar to the University of Wisconsin-Madison’s. Students say football games at Madison are a large part of the school’s culture.

“The fall at Madison kind of revolves around the football team,” said Will Crittenberger, a marketing and operations management junior at the University.

Crittenberger said thousands of Madison students anxiously wait to grab tickets as soon as they’re available online in the summer.

“It is kind of up in the air whether you’re going to get tickets or not,” he said.

That kind of urgency is key to promoting ticket sales, Schmit said.

University students aren’t in a hurry to buy tickets, he said, which often contributes to an at-times noticeably sparse student section.

“That doesn’t look good for anybody,” Schmit said. “We never sell out all of our tickets.”

Schmit discussed the proposed changes with athletics officials and other MSA members before it was brought to the board last week. He noted that while earlier sales are a good way to increase attendance and revenue, students should continue to have the first opportunity to buy student section tickets.

The University should also consider increasing game attendance by expanding its marketing to students at coordinate campuses, said Benjamin Metcalf, a health science senior at the University of Minnesota-Rochester and student representative to the Board of Regents.

Many students at satellite campuses aren’t aware that they can get student tickets for Gophers games, he said.

Metcalf said he’s made the trek to the Twin Cities campus for sporting events before, adding that other students likely would, too.

Even with increased efforts to bring in more students, Ellis said building hype around football games will take time.

“We’re not going to get to that next year,” he said. “We want to get there as quickly as we can. But it’s a process.”