Both teams win in final tune-up before the Griak Invitational. 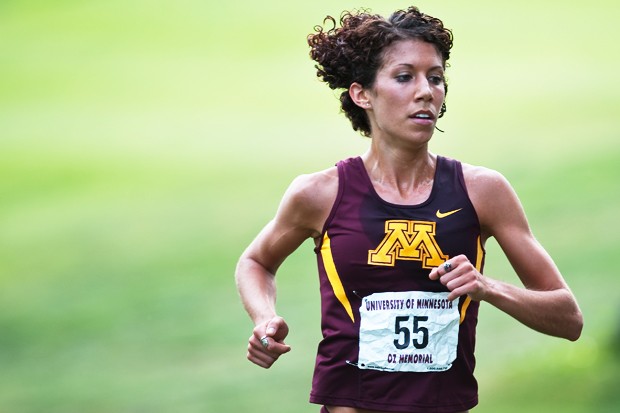 In the final warm up before the Griak Invitational, the Gophers men and women cross country teams dominated the competition at the Oz Memorial on Friday at Les Bolstad Golf Course near the St. Paul campus. Named after former Drake coach Gary Osborn, the Oz Memorial celebrated its 10th consecutive meet Saturday. ItâÄôs a way for Minnesota womenâÄôs head coach Gary Wilson to pay tribute to Osborne, who passed away in 2000 from a heart attack. âÄúIâÄôve just become real close with his family,âÄù Wilson said. âÄúHe was just one of those guys that did it the right way and did it for the right reasons.âÄù Wilson was not the only person paying tribute on Saturday. Senior Megan Duwell , already coming off an individual title in last weekâÄôs intrasquad meet, lost her grandfather to AlzheimerâÄôs the night before the race. âÄúIt was a long week, and he was definitely on all of the family membersâÄô minds and hearts,âÄù Duwell said. âÄúI wanted to dedicate this race to him.âÄù With friends and family there to support her, Duwell started the six-kilometer race strong, and by the first kilometer it was clear that for the second year in a row, there would be no competition at the Oz. Duwell finished the race in a time of 21:13.24 , besting second place by over 50 seconds. After the race, Duwell credited her family, specifically her grandfather, with the victory. âÄúWith the last 2k I was getting a little tired, so I was thinking in my head, âÄòGrandpa you better give me the last kick to make it in here,âÄô so he did,âÄù Duwell said. The rest of the womenâÄôs team finished strong as well, taking six of the top seven spots. However, a Drake runner finished fourth, snapping the Gophers streak of four consecutive perfect score races at the Oz. After the race, Wilson was pleased with how his team, which finished in first place with 17 points, performed. âÄúOur group is great. Elizabeth [Yetzer , second place finisher] had a great race, people handled the heat, the humidity really well, so I was pleased with the efforts,âÄù Wilson said. On the menâÄôs side, Minnesota only had eight runners compete in the Oz Memorial, but six finished in the top 15, giving the Gophers 22 points and the first place title. Redshirt freshman Pieter Gagnon , running in his first race with Minnesota, finished with the best collegiate time at 19:04.58. Former Gophers All-American Chris Rombough , running unattached to a team, won the race with a time of 18:54.68. For Gagnon, success at the Oz is something he hopes translates over to the next race âÄî the Griak Invitational. âÄúMy priority is to make sure IâÄôm helping out with the top scorers; that we all work together as a team to score as much as we can,âÄù Gagnon said. âÄúIt would be really nice to see if we could pull together a win.âÄù MenâÄôs head coach Steve Plasencia also liked what he saw, especially with the younger runners. âÄúIt was a good chance for us to run our young guys and get their feet wet, so to speak,âÄù Plasencia said. âÄúPieter ran a nice race; I think thereâÄôs some seeds there for the future.âÄù