Jerry Kill returned to the sidelines and MarQueis Gray ran for a quarterback's school-record 171 yards in the win. 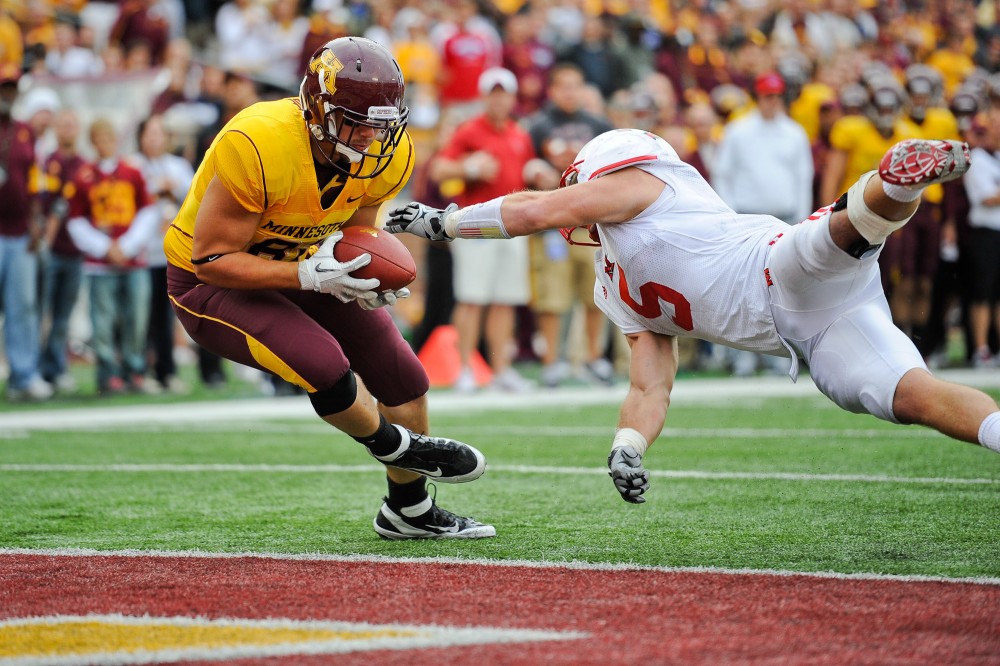 After stumbling out of the blocks, the Jerry Kill and MarQueis Gray eras picked up some steam Saturday.

The GophersâÄô 29-23 victory over Miami (Ohio) was KillâÄôs first as head coach of Minnesota (1-2). It was also GrayâÄôs first as the starting quarterback, and in the process he ran for a school-record 171 yards.

Kill was coaching from the sidelines after spending several days in the hospital following last weekâÄôs seizure. Gray finished a game healthy for the first time this season and thrived when he could tuck and run the ball in broken play situations.

Both teams dealt with strong winds throughout the game, as the contest often slowed to a battle of field position, with the punters playing a pivotal role.

Minnesota won the opening coin toss, but elected to defer and let their defensive presence be felt first.

Miami was able to exploit an early blitz for a 66-yard pass from the quarterback Zak Dysert to Nick Harwell, but the GophersâÄô defense held up on the drive after that and limited the RedHawks to a field goal.  That defensive stop was a precursor for the afternoonâÄôs performance.

On the ensuing possession, Gray brought out the GophersâÄô offense and quickly hit sophomore Malcolm Moulton for a 59-yard pass that set up a Chris Hawthorne field goal to tie the game.  The 33-yard field goal was the longest of HawthorneâÄôs career.

On the GophersâÄô next drive, they marched down the field and established themselves on short yardage when Donnell Kirkwood ran for his first touchdown of the year in to the endzone through the defense.

Minnesota had struggled to that point in the season controlling the line of scrimmage and picking up short yardage.

Indeed, Kirkwood and Bennett had more success against the RedHawks than in previous weeks and the ground attack, which was led by Gray, allowed the Gophers to dominate the time of possession game.

Gray broke the single-game rushing record for a Minnesota quarterback on 25 carries. The previous record (160 yards) was held by soon-to-be Rose Bowl MVP Sandy Stephens in 1961.

Another quick stop from the GophersâÄô defense that included a sack for freshman Michael Amaefula — the teamâÄôs first sack of the year — and Minnesota began their next drive with a play-action pass to Eric Lair on a crossing pattern for 43 yards down to the Miami 16 yard line.  The GophersâÄô offense was stifled at the two-yard line and settled for a 19-yard field goal from Hawthorne to take a 13-3 lead.

The RedHawks capped a later drive with an Erik Finlea one-yard rushing touchdown with 19 seconds remaining in the half to pull within three, 13-10.

Dysert later connected for a seven-yard touchdown.  Miami failed to convert the extra point and tied the game 16-16.

The Gophers drove down the field on the strength of GrayâÄôs legs on their next possession.  Gray rushed for 47 yards on this drive alone, and capped it with a one-yard out route to tight end John Rabe for the first touchdown reception to open the fourth quarter.

MinnesotaâÄôs defense clamped down at the start of the final quarter and on a crucial fourth-and-5 play, running back Duane Bennett blocked the RedHawkâÄôs punt attempt, and recovered it for a touchdown that gave the Gophers a 29-16 lead and some much-needed breathing room.

The score proved crucial, because the RedHawks weaved their way through the GophersâÄô secondary. Dysert connected on his next six of eight passes including a touchdown, which made it a one-possession game.

The Gophers were stymied by Miami on the RedHawkâÄôs 35-yard line, and attempted a fourth-and-nine conversion with three minutes remaining.

They failed to convert and the MinnesotaâÄôs defense had to take the field one last time.

The RedHawks marched down the field, and Dysert several times made something out of nothing by scrambling around in the backfield and narrowly avoiding sacks.

Miami got the ball inside the red zone in the six-point game.  An incomplete fade route to the endzone with three seconds remaining sealed the victory for the Gophers when sixth year senior safety Kim Royston deflected the pass.

Dysert, after being slowed down by the Minnesota defense in the first half, finished the game with 325 yards passing and 2 touchdowns.