Grace, guts, gild: An inside look at the lasting success of the U’s dance team

The team has won 18 first-place finishes since 2003 — but achieving national and international success takes hours of practice. 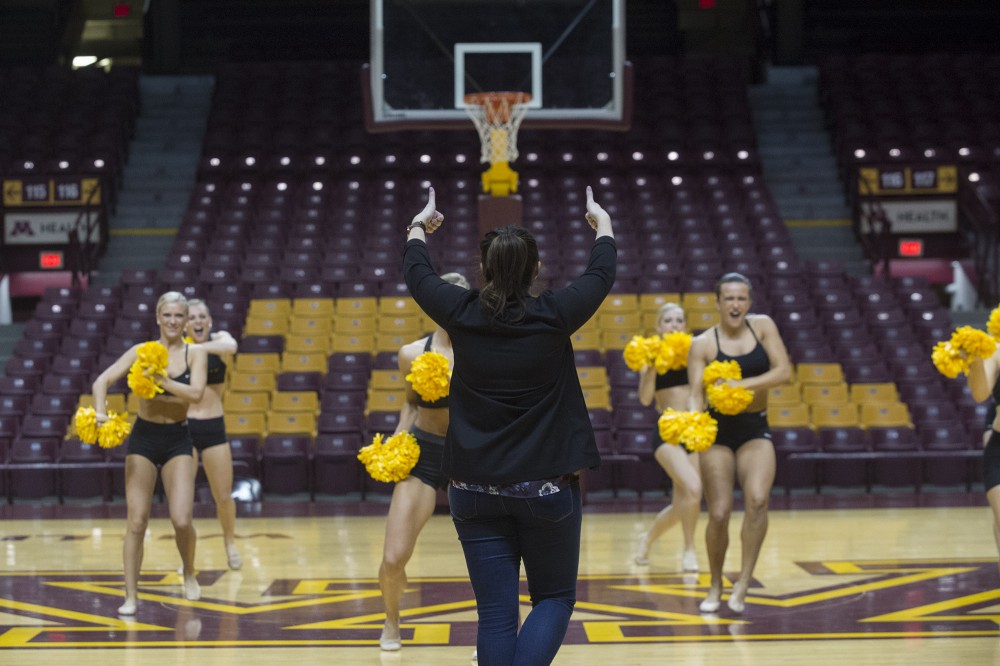 Dance team coach Amanda Gaines encourages the team at they practice their pom routine on Monday, Jan. 9, 2017 prior to their performance at the Spirit Squad Nationals Send Off.

Gathered at the center of a basketball court in the Bierman Field Athletic Building, the University of Minnesota’s dance team prepares to enter its seventh hour of practice.

At 8 p.m. in early January, the building is otherwise silent. The women face each other, eyes shut, visualizing a first place win at college nationals.

“Think of what you want to happen, not what could happen,” the team’s longtime jazz choreographer, Karl Mundt, instructs.

A coach hits the stereo’s “play” button. The women open their eyes and begin their jazz routine — every moment is orchestrated, even the exhales.

For two minutes, dancers perform in place with locked eyes and intertwined hands. Every few seconds, they shout another teammate’s name in motivation.

The song ends, and a handful of the women shed tears of emotion.

The dancers are most publicly seen on the sidelines of football and basketball games, but behind the scenes, they’re working toward international recognition.

To get there, it takes a minimum of eight hours of practice each week, upped to 30 hours in the weeks leading up to nationals.

And before that, high school dancers hone their moves in the studio and on their school dance teams in preparation for moving on to college teams like the University’s.

Team leaders say the University’s athletics department provides as much moral and financial support as they can. Still, despite the team’s winning streak, dancers have to pay minute expenses to compete and perform.

“[Young dancers] don’t really know individual dancers on the team, but they know Minnesota, as a whole,” said senior captain Kelsey Sutter. “To be able to represent that as a team, that’s one of the best things.”

Dancers begin their second practice of the day at 6 p.m. in the weeks leading up to competition. The team rehearses two routines: The first, jazz, the other, pom — which resembles cheerleading.

After some stretching, the team jumps into its pom routine. Coaches and choreographers can spend up to half an hour fixing one minor detail, like spacing, which is worth 10 points of their total score.

Pom is fast-paced, energetic, and reminiscent of what fans see performed on football sidelines — complete with playful facial expressions and sharp movements.

Jazz, however, is slower, and composed of lyrical movements charged with deep emotion.

Breaks in practice are anything but. Dancers help each other perfect turns or jumps. There’s no desire to sit still.

After two hours of pom practice, Mundt, the team’s jazz choreographer, instructs the women to perform their jazz routine, simulating the team’s movements from their backstage huddle to their choreographed walk-off.

“So, how did that feel?” Mundt asked the group afterward.

Sweating, tired and nearing a seventh hour of dance that day, Jenna Meyers looked at her 17 teammates and replied: “It felt for each other.”

The University of Minnesota dance team dates back to the 1960s, though it didn’t reach its apex until the early 2000s.

Of the team’s 18 national title wins since 2003, 12 were double title wins in jazz and pom, 10 of which came in five consecutive seasons. The University’s team also took home three world champion awards as Team USA.

Since the Universal Dance Association split its 1A dance division into jazz and pom categories in 2010, the University’s team has taken first in pom every year.

The team’s national success stretches beyond awards. They were the first to perform a jazz routine using one song in 2002 — a move head coach Amanda Gaines called “groundbreaking.”

By 2003, dance teams across the country followed suit. It’s now commonplace for a team to perform to one song.

The team won a pom title Sunday —  its eighth national title in a row.

“We get two minutes out on the floor and we don’t get any second chances,” Sutter, a team captain, said. “We don’t screw up in the first half and get to redeem ourselves in the second, so what we really try to do is make ourselves better every single minute of every practice.”

And some young women dream of being part of the powerhouse.

Kristina Monsen’s love for the squad dates back to her high school days.

“The first time that I saw the U of M perform [in high school], I wanted to be on that team,” Monsen, a team alumna, said. “I only applied to the U of M just to try out for the team, which I know probably wasn’t the smartest path, but that was what my dream was. I know that’s what a lot of girls want to do now, just because the team is on an upward path and they keep growing every year.”

Being an inspiration to young dancers is one of the most rewarding aspects of being on the team, captains say.

“We all take that to heart,” said senior captain Alli Woodbeck. “The fact that we are ambassadors to these younger kids … We hold ourselves to a higher standard of always being professional and nice and kind and humble.”

By the time students make it to auditions, about 40 or 50 women — including returning dancers — compete for 18 spots.

Audition participants learn short jazz and pom numbers and endure two rounds of cuts over the course of two days.

On the third day, each of the 30 to 36 women performs both routines, as well as their own solo number, in front of judges. Coaches also conduct personal interviews.

Though each dancer brings uniqueness to the team, one attribute consistently remains — “coachability.”

“A big, big part of it is being coachable, moldable, adaptable,” Woodbeck said. “The coaches spend a lot of time with you during the weekend, and they want to see that you don’t have to be perfect, but that you are able to hit it when it counts.”

While the Dance Team is not eligible for athletic scholarships, it receives some funding from the University.

Other costs, like high-end choreographers and costumes, are covered through fundraising efforts.

“There are a lot of universities across the country that have to fight a lot of battles to even be able to compete,” she said. “We’re really fortunate with that.”

“We don’t get the recognition, we don’t get the spotlights or maybe all of the benefits that all of the other athletes get,” said senior captain Nicole Bruhn. “It’s really a very humbling and cool experience to get to be a part of and be on a team with 18 people who really, truly love what they do and that’s why they do it.”

Dancers at the University often find that their success on the team carries over into life beyond college, alumnae say.

Besides coaching, Gaines and Hanne both work full-time jobs — Gaines is a senior store communications specialist with Target, and Hanne is a national advertising sales coordinator with FOX Sports North.

Gaines, who grew up in Minnesota watching the team, didn’t envision herself on the squad.

“When I was in high school, I was always like, ‘I’m not going to stay in Minnesota for school. I’m going to go somewhere far away,’” she said. “And then as I became a junior and senior, that’s when Minnesota started winning, and I was like, ‘This is actually pretty legit.’”

Gaines injured her hamstring in her senior year at the University and didn’t compete at nationals.

Instead, while sitting on the sidelines, Gaines watched for hiccups and helped her teammates perfect their moves.

Her leadership skills bought her the job as assistant coach in the fall of 2009. She has been the head coach since 2013.

Sometimes, dancers will coach while still on the University’s team, like Woodbeck, who coaches at Edina High School.

Monsen coaches at Prior Lake High School with alumna Mary LeVoir, who broke out of team dance shortly after graduating from the University in 2015.

She was featured on Season 12 of “So You Think You Can Dance,” and teaches master classes, team clinics and choreography.

She said her team experiences taught her to work well with others and helped her connect to opportunities in the dance world.

“The goals that this team sets are beyond anything I’ve ever experienced in life, work, anything,” LeVoir said. “After being on the team, and now being off the team, it’s something I desperately miss and something I look for in all of my relationships. … Something I have yet to find.”

Dance — as a sport — is often dominated by athletes who perform alone and strive for individuality. On the University’s team, though, dancers pride themselves on being united and in sync.

By their senior year, the captains say they care more about the team than themselves — it’s second nature.

“I’m a different person than I was when I was 18,” Sutter said. “This team has gone through some hard times, individually, and as a team, and being able to be there for each other is something that you can’t simulate.”