The University Opera Theater’s rendition of the opera left room for improvement. 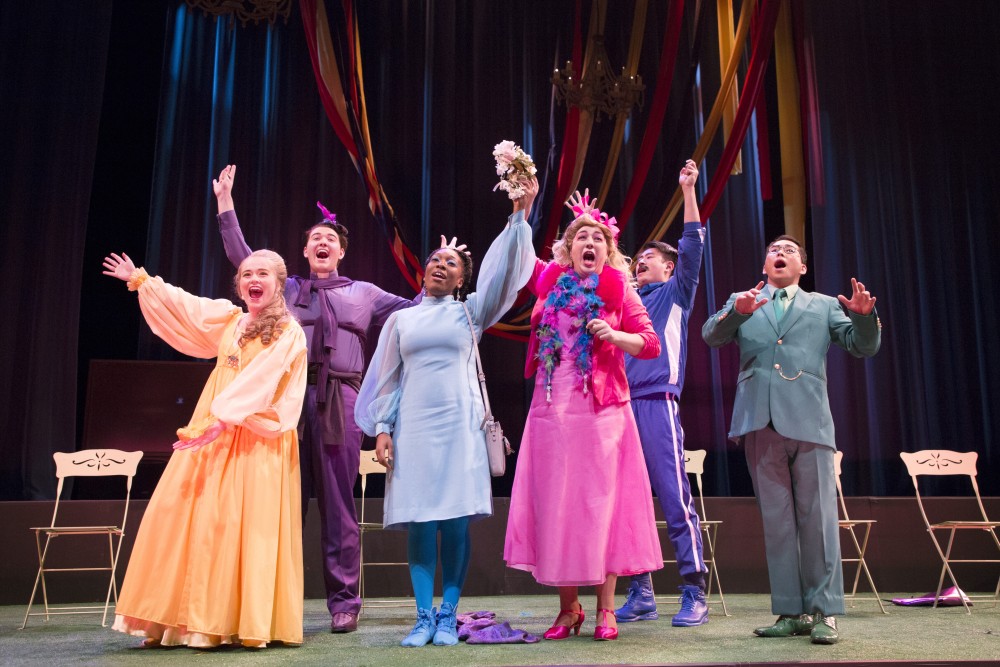 When the organizers of the village’s annual May Day festival cannot find a virginal young woman to crown as the May Queen, they turn to a gentle local boy, Albert Herring.

Herring, played by Adam Smith, is painfully embarrassed to be chosen and forced to wear an all-white suit, accompanied by a Lana del Rey-style flower crown.

Smith’s indifferent expression showed his irritation toward the situation perfectly. He also received a healthy number of laughs later in the show for his characterization of an inebriated Herring, wearing his flower crown backward.

While Smith’s acting garnered chuckles from the crowd, his singing voice was not always powerful enough for the leading role. When the orchestra reached above a mezzo-piano, his high tenor could not cut through.

Smith’s on-stage colleagues, like soprano Madison Holtze (playing Miss Wordsworth) and bass Ji Lu (Budd), projected their voices on a higher level. Beyond his spot-on voice, Lu stole nearly every scene with his entertaining portrayal of Budd, the village’s too-relaxed and dim-witted superintendent of police, dressed in a flashy cobalt blue sweat suit.

Lu’s knack for physical comedy and timing did great favors to the show overall, which needed moments like these to mitigate long arias.

Covert lovers Nancy (Sophia Prasinos) and Sid (Sullivan Ojala Helmbolt) also lit up the stage with their charisma, which made it easier to forgive subtle singing missteps (for Helmbolt, an adolescent-like voice crack; for Pasinos, a lack of consistency in volume and vibrato). The best moment occurred when — after three scenes filled with sexual tension — Nancy and Sid kissed, obscured by Nancy’s parasol. When Nancy removed the parasol, Sid’s once slicked-back hair was completely disheveled.

The performance could have used more moments like this to cut through Britten’s sometimes dissonant, unpleasant harmonies and chaotic sections when the ensemble played in unison.

Some of the choices made by co-directors Christina Baldwin and Jennifer Baldwin Peden — yes, they are sisters — were well-intentioned but ultimately gimmicky.

The decision to dress the orchestra members in pale pink vests and ties felt excessive. Additionally, the directing duo opted for period costumes that were color-coordinated to each character. Florence Pike (Mikalia Bradberry) was dressed head-to-toe in light blue; Lady Billows (Emily Herman) in bright pink; the Mayor (Chul Young Kim) in emerald and the Vicar (Tanner VanderKrabben) in purple.

When the full cast was on-stage in a line, there was a neat rainbow effect. During other scenes, however, the costumes were visually overwhelming.

Throughout the show, the best moments were those sprinkled with humor — when the student singers truly delved into their characters and made them their own.