Minnesota beats both Wisconsin and Iowa in straight sets. 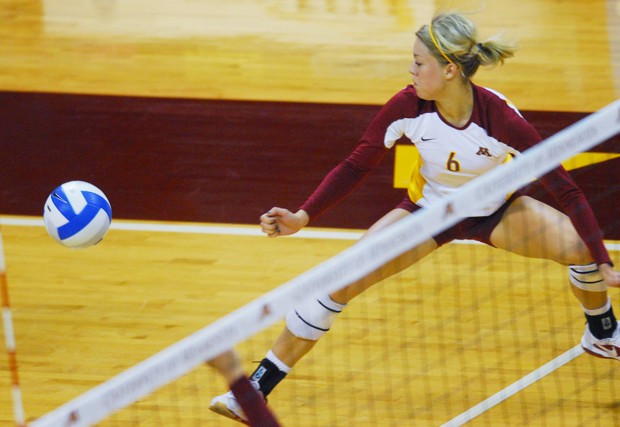 The No. 9 University of Minnesota volleyball team set out this weekend to prove that they own the border. The Gophers proved their dominance in grand style by beating Wisconsin 3-0 on Friday night by scores of 25-15, 25-16 and 26-24. Minnesota followed that by besting Iowa 3-0 on Saturday night with scores of 25-14, 25-14 and 25-18. FridayâÄôs win over Wisconsin was the 11th straight Big Ten home-opener victory. It was also the third consecutive win the Gophers have had over the Badgers. That pales in comparison to the streak extended on Saturday as Minnesota won its 28th straight match over Iowa. âÄúThese wins validate the perception that weâÄôre a good team,âÄù Gophers head coach Mike Hebert said. âÄúIt confirms that we can take on two opponents that weâÄôre supposed to beat and stay disciplined from start to finish.âÄù The Gophers outplayed both their opponents in just about every statistical category. Minnesota out-killed Wisconsin 44-35 and had a 0.252 hitting percentage compared to 0.136 for the Badgers. The Gophers out-killed Iowa 46-30 and outhit the Hawkeyes 0.300 to 0.120. The Gophers also out-served their opponents with a combined 12 aces to none. Minnesota was once again led by juniors Lauren Gibbemeyer and Brook Dieter . Between the two matches, Gibbemeyer had 27 kills and an outstanding 0.520 hitting percentage, as well as eight blocks. Dieter had a combined 18 kills to go along with 16 digs. Senior setter Taylor Carico also continued to perform well. She set up the offense with a total of 68 assists and provided some fire-power of her own with 10 kills. Sophomore Ariana Filho continues to emerge as an offensive threat, as she finished the weekend third on the team with 11 kills. The Gophers fans also provided a spark to the team. Between the two matchups, the Gophers drew more than 7,000 fans to the Sports Pavilion. âÄúPlaying in our gym with our crowd is always a really exciting game,âÄù Gibbemeyer said. âÄúI think even other teams who arenâÄôt from around here like playing in this atmosphere with such energy and enthusiasm. It sends a message to other Big Ten teams that playing in MinnesotaâÄôs gym is going to be a tough match.âÄù Minnesota used a solid team effort to control the tempo of the matchup against Wisconsin. The Gophers rhythm continually kept the Badgers on their heels, and the Gophers refused to relinquish. The Gophers grabbed an early lead in the first set against the Badgers and rode a wave of five Gibbemeyer kills to an easy 25-15 win. The second set was more of the same as Minnesota used a disciplined attack to go on a 10-2 run en route to a 25-16 win. The third set appeared to have Minnesota headed toward another easy victory as Wisconsin began beating themselves with unforced errors. The idea of going down so quickly must have sent a jolt into the Badgers, as they began winning points in chunks and eventually took a 15-12 lead. However, Minnesota was not about to lose a set on their home court lightly. The Gophers went on a 6-1 run to retake the lead and eventually closed out the set and the match with kills by Gibbemeyer and Carico, winning 26-24. Iowa had already defeated Wisconsin 3-1 earlier in the week, so the Gophers came into their matchup with the Hawkeyes expecting a tough opponent. The Hawkeyes led Minnesota 4-8 early in the first set as their finesse frustrated the GophersâÄô front line. Then Minnesota made adjustments, found ways around IowaâÄôs blocking and once again got in a scoring grove. After claiming the lead in the first set at 14-13, the Gophers did not look back for the rest of the night. With the exception of a 0-1 start in the second set, the Gophers led the Hawkeyes for the entire match as Minnesota rolled to three easy set victories, sending Iowa home humbled. Minnesota takes to the road next weekend, first playing at Purdue on Friday at 7 p.m. and then going to Northwestern on Sunday at noon.